Inspired by their admiration for urban brownstones, this Kirkwood couple builds a custom home to live closer to their beloved grandchildren.

The dining room entry partition walls were inspired by the homeowner. “It was exciting to see the homeowners’ vision of the partitions become a work of art in the house,” says designer Brenda Jones, who provided the finishing touches to bring the idea to fruition. Carpenters from Tegethoff Homes completed the work on the poplar partition walls, which were stained with what Jones calls a “mixology” of tones to complement the other woods installed throughout the home. Three-foot by six-foot-tall windows topped by two-foot-high transoms flood the room with sunlight throughout the day. The rug is from the homeowners’ collection. 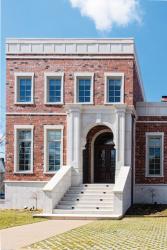 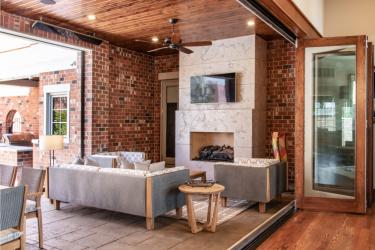 A screened-in porch was on the homeowners’ list of “must-haves” for their new home. The bi-fold glass and wood doors open wide for the ultimate in indoor/outdoor living. “We were able to create an outdoor atmosphere that blends perfectly with the interior,” says designer Brenda Jones. The outdoor space with its concrete fireplace is one of her favorite elements in the home. The outdoor kitchen is to the left, with the pool and patio just beyond. 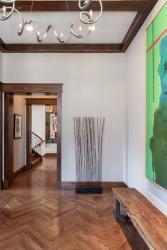 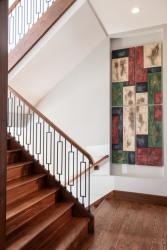 The unique rectangular design of the iron stair balusters represents the symmetry the homeowners wanted to create throughout the rest of the home, according to designer Brenda Jones. “Ancient Walls,” an oil on canvas by artist Lou Monti, was commissioned by the homeowners about 20 years ago. 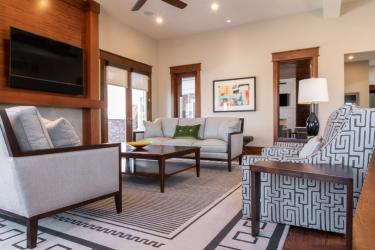 Warm woods and a soothing color palette for paint and fabrics meld with transitional furniture for a relaxed, beautiful family room and interiors throughout the home. Doors flanking the artwork lead to the outdoor sitting room. 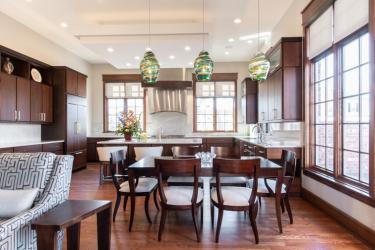 Above the breakfast table, pendants from Third Degree Glass Factory bring pops of color and contemporary flair to the clean lines of the kitchen. The stainless steel hood vent was selected to give the homeowner a more modern feel for her kitchen, while the quarter sawn mahogany trim on the hood blends with the cherry kitchen cabinets and the family room fireplace. 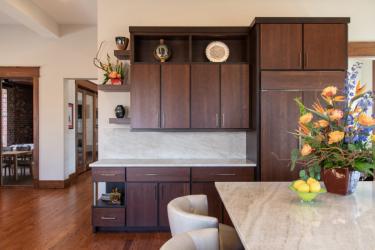 Taj Mahal quartzite was used for the countertops and backsplash in the kitchen, fabricated by Stone Fabricators. Crafted by Wright’s Cabinet Shop, the cherry cabinets “are beautiful on their own,” says the homeowner. “I don’t need extra stuff.” 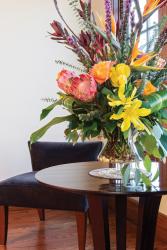 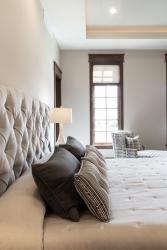 A soothing color palette sets the mood for a serene, inviting master bedroom. Every window on the main level of the home has motorized shades. Fitting the shade into the space was a challenge, admits Drew Balsman, co-owner of HD Media Systems. Every window pocket housing custom Lutron shades was modified to ensure they would fit within the millwork, according to Balsman.

With five grandchildren living nearby, a Kirkwood couple doted on frequent visits with the children. However, as the children grew and gained more independence, Grandma and Grandpa’s house, located on a winding, narrow road, proved problematic for the children riding their bikes or walking over alone. “It just made sense for us to move closer to them,” says the wife. As they considered a style for their new home in the heart of Kirkwood, the couple found inspiration in urban brownstones — one of the few architectural styles they had not yet made their own after having lived in a contemporary home, a Cape Cod and a 150-year-old farmstead.

A Victorian in the heart of Kirkwood became available, and although the old Victorian could not be saved, the husband immediately loved the lot and its lively location. The wife admits the idea of living on such a public lot — across from the library and close to commercial properties — gave her considerable pause. “I was very worried about the house being so public, so it took me a while to process how it could work,” she says. Eventually she came around, so with a vision of a New York City brownstone and its distinctive stoop as a starting point, the couple proceeded with planning a home that would entail city living at its finest.

The house started with the windows, the wife quips. Their contemporary home in Sugar Creek boasted walls of windows with natural light streaming into the public rooms, which would have been sorely missed in the new home, she says. Other must-haves for the new home included an impressive entryway, a screened-in porch for indoor-outdoor living, an upstairs terrace, ceiling details and an open feel throughout. “I like very clean lines, yet I want the home to be warm,” says the homeowner. “Not too stark or modern, but not messy.”

Working with architect Robert Srote, ALA, MBA, and builder Tegethoff Homes, the couple presented their wish list for features in their new home. “We’d thought about this kind of house in passing for many years,” says the wife. “The team was terrific in bringing it all together and making our ideas fit in a cohesive design.”

To address the challenge of designing a comfortable yet secure family home on a corner lot, attention must be given to the location of public and private spaces of the home, says Srote, principal of Srote & Co Architects | Planners | Interiors. “Specifying proper building materials to control sound transmission and having a general contractor like Tegethoff Homes to carry out the intent of the construction drawings resulted in a successful project,” he notes.

The homeowner got her wish for natural light in part by way of soaring 3-foot by 11-foot arched windows in the south-facing wood stairwell. In the adjacent dining room, also located on the south side of the home, Srote designed six 3-foot-by-6-foot-tall windows topped by two-foot-high transoms to flood the room with sunlight throughout the day. Entryway partition walls made of poplar define the dining room. Brenda Jones of Design Expressions provided the finishing touches for the walls which were inspired by the homeowner. “It was exciting to see the homeowners’ vision of the partitions become a work of art in the house,” says Jones.

At times, of course, windows must be covered for privacy. That task fell to HD Media Systems. Co-owner Drew Balsman says their charge was to combine all aspects of technology, from the Wi-Fi network and audio to security and automated pool controls. “Our goal is always to blend the technology into the space and keep a balance between design and functionality,” says Balsman. He says HD Media Systems modified every window pocket housing custom Lutron shades – 64 of them – to ensure they would fit within the millwork. “This made them blend more and you don’t even notice them,” says Balsman. “Sometimes the most important details on a job are the ones you don’t see. That’s because you aren’t supposed to see them.”

Jones helped bring the “wow” to the home through creative design, a soothing color palette and transitional furniture selections. In the kitchen, for example, the homeowner wanted a clean aesthetic but nothing too stark. Thanks to the craftsmanship of Wright’s Cabinet Shop, the doors of the cherry cabinets pop against boxes and frames stained with a darker finish. “These cabinets are beautiful on their own,” says the wife. “I don’t need extra stuff.” A massive stainless steel hood vent would have been too modern on its own for the homeowner, who loves the warmth of woods. Jones designed a quarter sawn mahogany wood trim to wrap around the hood, which makes a big impact, Jones says. “Brenda came up with the size of the trim that actually worked,” says the homeowner. “She brought the idea to life.”

Completed in late summer 2018, the home carries characteristics of the adjacent commercial and residential properties, blending seamlessly with the neighborhood, Srote says. The homeowners agree. “When we started this, we thought this style would be a nice addition to Kirkwood,” she says. “We’ve gotten a lot of nice comments from people just walking by, who say it’s a great design for this area.”

And the grandkids seem to approve as well. Every week at least one or two of them visits, where they can be found swimming in the pool in summer, hanging out on the screened-in porch,  playing games or watching a movie in the home theater on the first floor. “We see them a lot,” the wife says with a smile.