Designer CJ Knapp nails casual-chic style with the help of patterns, a painting and a pooch named Macy. 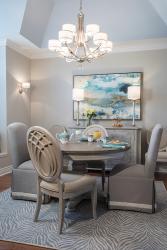 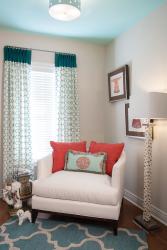 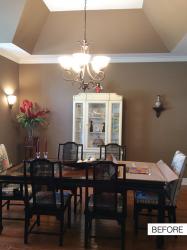 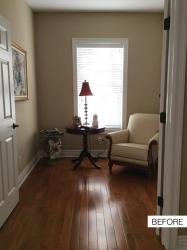 “That’s Macy’s little room,” says homeowner Mary Jennings, referring to the 10-by-10-foot nook off her master bedroom — an area so tiny it might have been tricky for some designers to outfit. Knapp, though, created a cheerful design centered around Jennings’ 9-pound Bichon Frise, who naps daily on the custom 4-by-6 hand-knotted Jaipur rug. Jennings uses the room, too, mostly for reading on the contemporary – and comfy – chair-and-a-half by Sherrill Furniture.

It’s the expertly crafted pattern-centric motif that took this small space from modest to marvelous. “I’ve always said it takes about 10 years for a designer to get really good at patterns,” explains Knapp. She’s clearly put in her time: Here, a bold Moroccan carpet boosts more subtle designs: circle lattice curtains and a barrel shade light fixture with holes cut into the drum. A mosaic lamp from Wilson Lighting adds another layer of texture – and visual interest – to this delightful, dog-friendly scene.

Kimono prints were brought in from another room for color, along with bright throw pillows that balance Knapp’s daring blue ceiling. The designer explains, “Keeping the walls neutral – putting color on the ceiling and floor – makes the room feel bigger.”

She used that lofty trick in the homeowner’s dining room, too, which was remodeled at the same time as the sitting room. “We wanted to move to softer colors,” Jennings says. She and Knapp were shopping for lights at Wilson Lighting when they spied the fluid painting now hanging above that understated, custom buffet; the art, then, was the impetus for a cheerful, multi-functional room boasting a cool, Country French palette: tawny gray walls, silvers and sky blue.

“Mary’s a fun client,” says Knapp. It shows, mostly in the daring melding of styles; a round pedestal table from Hooker Furniture’s Sunset Point cottage-inspired line sits atop a blue Stanton Carpet zebra print rug — the latter trendy and pure fun. Sleek fixtures from Wilson Lighting add a dose of sophistication to a room that somehow manages to be casual yet impactful. Custom wood dining chairs blend with two upholstered armless side chairs snagged at Marketplace at the Abbey. Psst: Those side chairs are on wheels, and roll into the living room for extra seating. In a space that’s so uniquely stocked, it’s hard to pick a favorite detail. Jennings, though, is partial to the blue linen chest custom ordered by Yours By Design. “It’s so different,” she says. “And it blended so well.”     See www.stlouishomesmag.com for resources.