Veritas finds its truth in a menu that juggles both ever-changing ingredients and consistent elements. 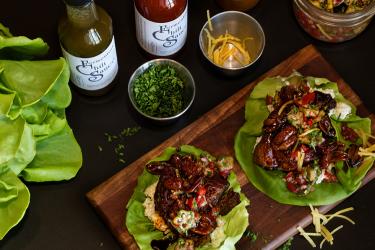 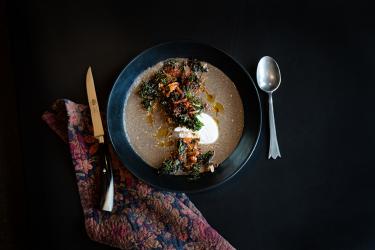 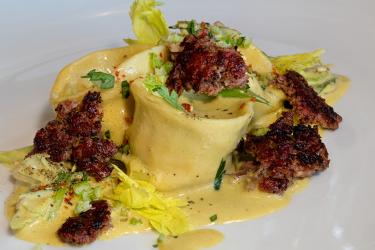 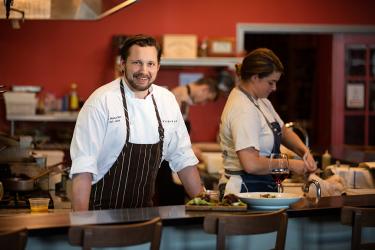 A half-dozen or so entrees and a few new appetizers debut each week at Veritas Gateway to Food and Wine, along with a daily vegetable napoleon, each making the most of the latest fresh regional ingredients.

The market was the brainchild of David and Stephanie Stitt, native Alabamians who founded their specialty market in Clayton in 2004. Since then, the business has moved to Ellisville and son Mathis has taken up his station in the kitchen, expanding Veritas from a store with limited dining to one with a fullfledged restaurant that debuts a whole new lineup of dishes every Thursday. It’s a concept that keeps things fresh for patrons who thrive on variety, yet not so jarring that creatures of habit can’t find something to love with each visit.

“The idea of using what’s available and close and logical, seasonally, makes a lot of sense to me. It’s driven not only by what’s in season, but what my local farmers have available,” says Mathis. “I like to push boundaries with my customers, pull them out of their comfort zone a little bit. The menu might look a little scary when they read it, but you build trust.”

The Veritas menu borrows as heavily from the hyperlocal philosophy of Vermont, where he attended the New England Culinary Institute, as it does from his parent’s Southern roots. Elements of Southern cuisine pepper Mathis’ weekly menus, always tied to what’s available here and now.

A lobster bisque on one of Stitt’s midsummer menus, for instance, incorporates seasonal squash, a combination that amps up the heartiness of the creamy soup with a Midwestern vegetable that’s just hitting its prime. Spring menus may lean heavily on spinach and tomatoes before a summer shift to peaches and berries. By fall, bumper crops of squash and root vegetables make their debut to warm up the chillier months. The shapeshifting lets Chef Mathis and his regular customers explore the latest harvests together. These changes, he says, will always stay anchored to a bit of the familiar.“

The formula works well for Veritas, which is situated in an area where there isn’t as high a concentration of restaurants as other areas of the county. “It’s a nice bridge for people who really want something familiar. It’s the right place for this type of approach, and probably the right time.”

Charred Mushroom Soup: Is there a sauce any better than egg yolk? A poached egg sits atop this soup, which gets its umami from charred mushrooms and a slight earthy bitterness from kale.