Albert Kuo's artwork is a result of his constant internal dialogue. 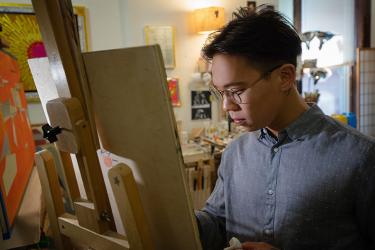 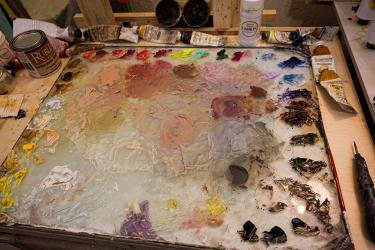 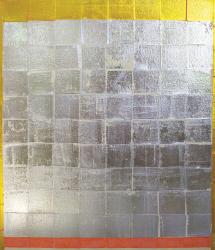 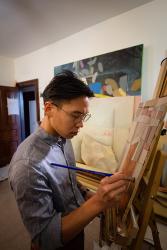 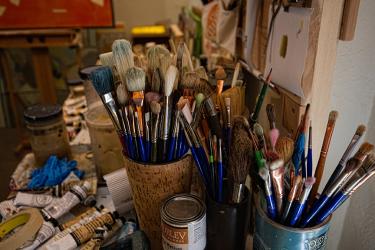 The luminous blue-gray squares on the rectangle canvas radiate light. They look like swaths of paint, but are, in fact, pieces of cut-up Hell Bank Notes, fake Chinese money that is ritually burned to give ancestors wealth in the afterlife. “I wanted the piece to be a reflection of ourselves, so I gave it this mirror quality,” Albert Kuo, 31, explains. “At the moment, I’m not certain what I feel about it. I’ll put it away for a while and reflect on the experience [of creating the work.]”

Kuo’s reflection, his introspection, extends beyond this one piece. It defines his body of work. While some artists create in order to connect with the viewer, Kuo’s paintings, sculptures and furniture are the result of a constant conversation with himself. “I have the need to do an idea, just to get it out of my head. It’s a filtering process, a constant conflict ... just making a pretty picture isn’t enough for me to feel self-fulfillment,“ Kuo explains.

Kuo has been an artist his entire life, including a period of sketching cartoons for his friends on his grade school bus. He credits his parents for supporting his passion, and teaching him to approach his art with workman-like discipline. As a result, Kuo has a well-defined work schedule, one that includes time to read and study art theory, in addition to studio hours.

Mr. Kuo is also an adjunct art professor at three local community colleges. He appreciates the steady paycheck, which he says, allows him “the financial freedom to play in the studio.” But his love of teaching stems from his deep desire to reach students that are under-served by traditional education methods. “I believe that social issues come from a lack of education, or a lack of a good education. I want my students to be aware there are other ways to learn,” Kuo says.

Mr. Kuo’s work is currently on display at Ilune Salon in Clayton. He also creates private commissioned artwork, which gives him great satisfaction. “I’m against the idea that art should be unobtainable. I want people to be able to afford nice, good art, which fits in their home. I like to work with people, and I like that I’m able to provide art for them.”