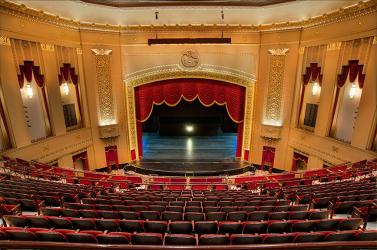 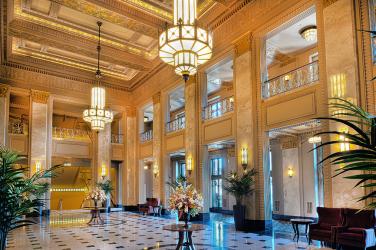 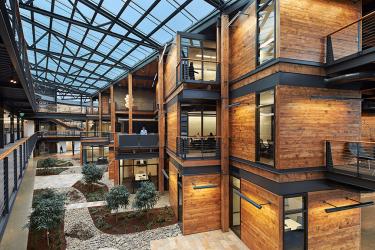 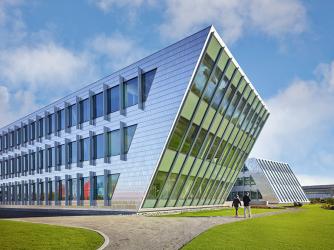 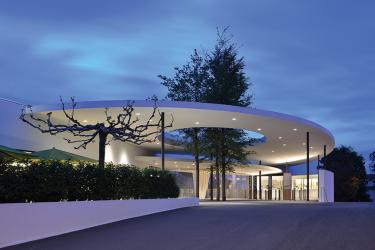 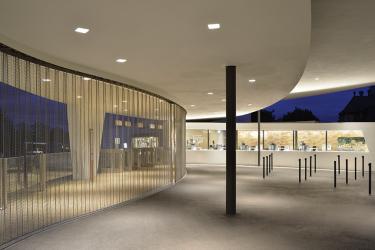 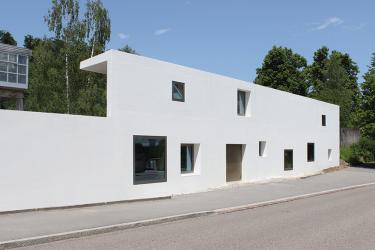 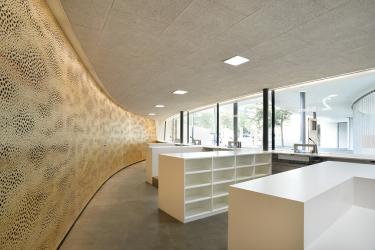 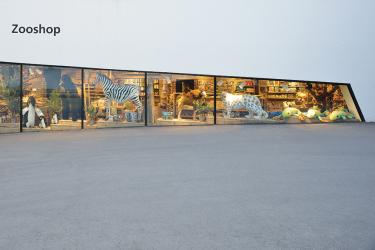 Peabody Opera House, St. Louis, MO
Photography by EverGreene Architectural Arts
Built in 1934, the Kiel Opera House was originally split into two with the front of the building housing the Opera House and the back housing the Auditorium. After being closed for nearly two decades, the Auditorium was torn down and the historic Opera House was restored and renamed the Peabody Opera House. The restoration, performed by EverGreene Architectural Arts, included full-depth plaster patching, decorative painting, acoustical plaster installation and gilding. The Kiel Opera House now shines as it did in its heyday.

Federal Center South Building 1202, Seattle, WA
Photography by Benjamin Benschneider
Federal Center South Building 1202 is the 209,000-square-foot regional headquarters of the United States Army Corps of Engineers (USACE) in Seattle, WA. Designed by ZGF Architects LLP, the project is one of the most sustainable buildings in the United States, performing in the top 1% of energy efficient buildings. It received LEED Platinum certification and exceeded guaranteed energy and water performance requirements. Among its notable features are the innovative daylighting designs, heavy use of reclaimed timber, and waste elimination strategies, such as the use of harvested rainwater in the atrium gardens. In addition to the aggressive energy goals met, the building’s design also creates an optimal space for its inhabitants. The building’s U-shaped form, also known as the “oxbow,” provides a flexible workplace environment while simultaneously meeting GSA’s security requirements for progressive collapse, which is when a primary structural element fails, resulting in the failure of adjoining structural elements causing further structural failure. The oxbow design optimizes daylight penetration, provides occupants direct visual access to nature, and fosters a sense of community among employees.

Zürich Zoo Foyer, Zürich, Switzerland
Photography by Sabrina Scheja, CH-9435 Heerbrugg
As one of the most visited sights in Zurich, the Zurich Zoo has had a continual growth in the number of visitors. To accommodate the influx of visitors the entrance foyer was reworked and adapted to fit the current needs. Architecture firm L3P Architects designed the new complex, merged facility embracing diverse areas such as the forecourt, counters, visitors’ center, Zoo shop, Zoo café, volunteers’ center and station for the new Zoo tram.

Curved walls, display windows and roves combine in spectacular rolling lines. The flowing forms and a selective light design quickly and intuitively guides arriving visitors. As especially developed acoustic panel made from packaging plywood was put to use in the counter and visitors’ center area. The natural grain reminiscent of animal fur is superimposed with animalistic textures derived from irregularly drilled holes.