How You Say "Delicious" 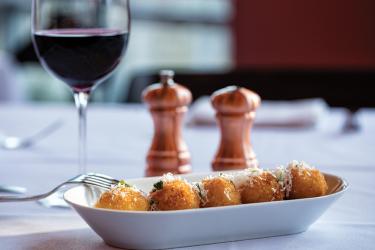 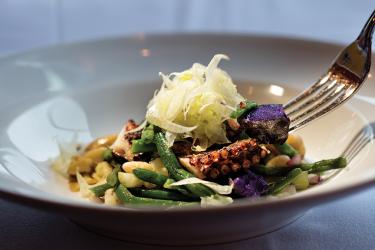 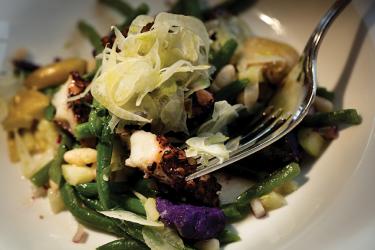 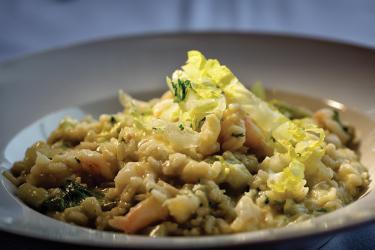 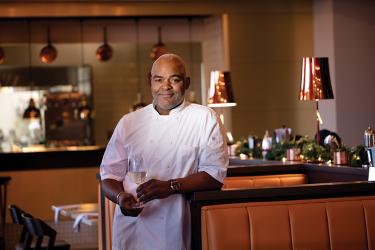 Parigi is how Italians say Paris. The name of serial restaurateur Ben Poremba’s latest fine-dining establishment in Clayton is fitting because its menu reflects how the French might interpret Italian food. The offerings fuse Executive Chef Ramon Cuffie’s affinity for Italian cuisine with his mastery of French technique. The menu not only reflects his travels to those regions, but also his desire to use his experiences and skills to give beloved recipes fresh personality.

Take, for example, Cuffie’s take on tortellini. He eschews the traditional pasta filling for one that keeps the proteins largely recognizable. “I wanted to have a tortellini that had more of a chew, where people could say, ‘Oh, that’s pork!’” His risottos, which change daily, make up of multiple varieties of rice, and he’s been known to throw in a few other surprises. For example, he’s known to include romaine lettuce in the stock, and a puree of romaine folded in at the end of the cooking process, to infuse it with a “nice vegetal milkiness.” And, in an environment where meat takes a starring role next to pastas and grains, Cuffie makes liberal use of tried-and-true flavor techniques that don’t get much play in the Midwest, such as encasing proteins like rabbit in caul fat to keep it moist and rich.

Cuffie’s innovation shouldn’t surprise anyone. His chef credentials include stints at such notable establishments as Bar Italia and La Dolce Via. But a couple of years ago when he was just north of the half-century mark—an age at which many accomplished professionals are cashing in on their laurels and coasting on decades of field experience—Cuffie made a move he hadn’t been able to do as a young up-and-comer: earning a certificate from the Culinary Institute of America in Hyde Park, New York.

Now 53, Cuffie says his late return to culinary academia gave him an unexpected boost of confidence that has translated to a renewed focus on innovation. “Having that piece of paper widened my perspective. It sort of gave me permission to try things and have a point of view that was different. Not that I didn’t before, but I just found it to be a liberating experience,” he says.

It’s Cuffie’s doggedness that perhaps explains Parigi’s appeal. He’s a man who, by his own admission, scoured the St. Louis region for tomatoes for his sauces that met his strict standards—just ripened tomatoes and salt, sans preservatives, basil or any other herbs or spices—a search that took him months.

“I try to get the best ingredients and leave as little of a negative footprint on the environment as I can. I give people simple food with layers and layers of flavors. There’s integrity in trying to offer someone an honest experience,” Cuffie says.   See www.stlouishomesmag.com for more information.

The Cooking School Menu
Arancini: Cuffie forgoes the standard mozzarella and parmesan in the center of his arancini for taleggio cheese. “It’s really intense. We basically pipe it in, and you definitely get flavor from that.” Dunked in a chunky sauce comprised of peperonata, tomato and onion, it’s a crave-able flavor bomb.
Wine pairing: Vino dei Fratelli Montepulciano d'Abruzzo

Octopus Salad: Octopus is cooked three ways to create a tender topper for this salad: seared then rested; poached in herbed olive oil; then marinated in chili olive oil and lemon, and briefly grilled. It’s set atop a bed of green beans, red onion and Spanish beans, then finished with fennel.
Wine pairing: Simonsig Chenin Blanc