Ted Collier's abstract paintings show the spark of creativity he has always wanted. 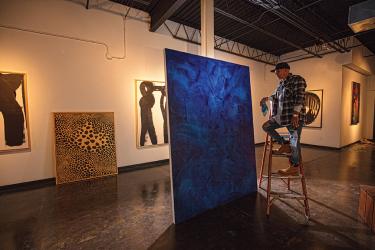 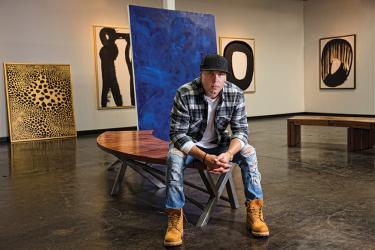 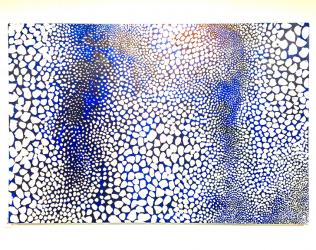 Ted Collier is a man of many hats. He is the co-owner of Katie's Pizza, the future owner of a hip, new meal kit service called Viro Pasto, a fisherman and, most prominently, a highly talented artist blooming in the St. Louis area.

As well put together as Collier is as an artist, it's hard to believe that this is still a relatively new career for him. In fact, he spent the first 16 years of his professional life working in the real estate business, first for his family's third generation real estate company and then for one of the largest commerical real estate firms in the state. But that all changed when the market crashed in 2008. “It was bad for me, and it was bad for my clients, and I guess subconsciously I was looking for a way out at that time—a way out of what I had spent 16 years doing—and for the door to the creative life that I had always wanted,” he says.

Shortly after that, he met his future wife Katie. They became joint owners of Katie's Pizza in 2013 and got hitched in 2014. Katie brought the recipes and restaurant know-how and Collier's job was to find a way to finance it. A task easier said than done, it ended up taking quite awhile to get off the ground. This left Collier with some downtime that he chose to fill with painting.

That hobby of painting quickly turned into a way for the young couple to pay off some of their bills. After that, Collier decided to follow his passion and have a go at becoming an artist. The rest is a blur of self-promotion and gallery openings, all leading up to the artist we know today.

Collier's style as a painter isn't an easy one to pin down. This is due to the sheer variety that he has in his portfolio. His pieces range from bright, colorful patterns to monochromatic humanoid abstractions and just about everything inbetween.

Perhaps his most iconic works thus far are his renditions on circles. Why paint circles? Well, when you see them, you'll understand. As Collier puts it, he did it simply “because they didn't exist the way I saw them in my mind.” He continues, “Molecules, water droplets, atoms, everything has a round shape. We are made up of circles. When we look at other people to communicate, we're looking at an almond, circular shape in the eyes. I think that's a very comforting thing,” Collier explains.

As for Collier's process, it's really just about letting the brush take over. “I've always sort of had that Ouija board mentality where I'm just going to touch the board and it's going to take me where it wants to go, whether that be good or bad. For me, it's just kind of like rolling the dice and letting fate take its place,” says Collier.

As mentioned earlier, Collier has done a lot and has achieved quite a bit, but what he finds most rewarding is giving back. He has donated funds to St. Louis Art Works, a non-profit organization that helps young artists find opportunities in the region, as well as St. Louis Children's Hospital.