Building a backyard coop not only adds a few cute chicks to your flock, but fresh eggs, too. Plus, gathering eggs from the back yard is about as local as food can get. 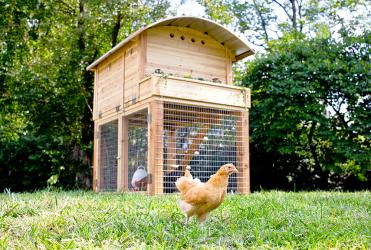 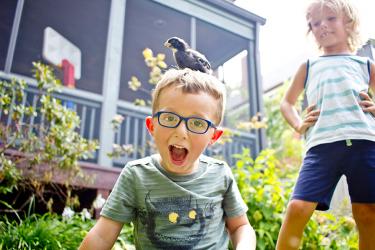 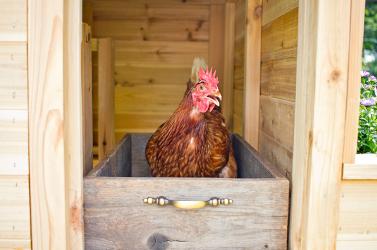 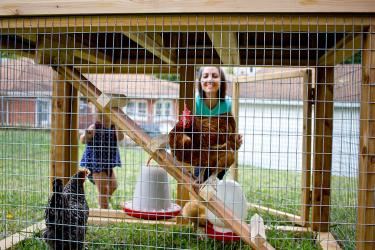 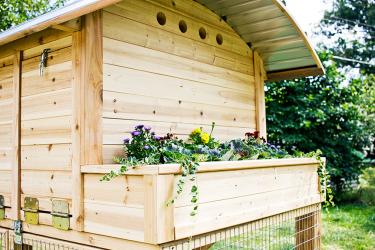 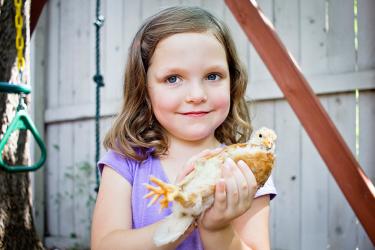 Why did the chicken cross the road? There are as many variations to that old riddle as there are trick or treaters on Halloween, who always seem to come up with a few new versions. But these days there are some new takes that even kids looking for a new joke to trade for candy haven’t dreamed up.

In the spring and summer of 2017 those egg-laying bundles of fluff and feathers are pecking the pavement as they travel to farmer’s markets, grade schools and neighborhoods throughout St. Louis, and maybe even your very own back yard to settle in comfortably as a part of the everyday lifestyle.

Chickens, and the eggs they lay, have been swooped up in the current desire to know where the food we eat comes from; they are one tiny piece of the farm that seems to work neatly into a suburban and even city lifestyle.

When it comes to bringing chickens into back yards and schools, Bill Ruppert of Kirkwood was a suburban pioneer.

In 1994, Bill purchased an historic Kirkwood home that between 1919 and the late 1970s had been the residence of Peter and Maud Patton, avid gardeners who had for many years — you guessed it — maintained a chicken coop on the property. A guru of all things green, Bill owns and manages the St. Louis office of National Nursery Products and he is a backbone of the local horticultural industry and related organizations. The rich soil that was a byproduct of the farm and chicken coop fit in perfectly with Bill’s plans for a series of gardens.

In addition to his love of gardening, Bill has a fondness for poultry. Among his cherished childhood memories were visits to his Aunt Magdalen and Uncle Bernard Mann’s farm in Pickneyville, IL, where he happily visited the chicken coop to collect fresh eggs and give the hens meals of kitchen scraps. When Bill and his wife Joan engaged an architect to renovate and expand their home in 2000 and 2001, they included in those plans a significant chicken palace with indoor and outdoor runs and even a lookout tower that since then has become known as the Coop de Rupe.

Bill and Joan’s flock normally numbers in the twenties and they are an integral part of their lifestyle, with the couple consuming the eggs as part of a low-carb diet and turning the wood shavings and manure from the chicken coop into garden compost after an appropriate decomposition period. Bill also works with Gateway Greening to bring chickens into school gardens. They are tied into the school’s outdoor learning and STEM (science, technology, engineering and math) programs to teach children about caring for animals and how the chickens are involved in agriculture, he explains.

Seth and Maria Jansen of North St. Louis County got into backyard chickens for an entirely different reason. Maria is allergic to animal fur; dogs and cats were out as pets for their now five children. Birds, however, were fine. “We had some friends who had chickens and that idea fit in nicely with our interest in gardening,” Maria explains.

The couple went the “do-it-yourself” route to build a coop and purchase chickens and found it to be a lot more work than they had anticipated. Looking for advice on the Internet is difficult, Seth explains, as what is needed to raise happy healthy chickens depends upon climate. What works in other parts of the country does not necessarily translate to St. Louis.

Five years ago, they turned what they had learned into a business, The Easy Chicken, to provide livestock, coops and all the necessary accoutrements to folks wanting to have chickens cross the road and take up residence in their own back yard. They also lease chickens and coops to area residents on a monthly or seasonal basis. That way folks can get a taste of running a small chicken farm and determine if it is something they want to do on a year-round basis or if they would rather rent and enjoy the hens and eggs when they have time. The Easy Chicken is a regular at the Tower Grove Farmer’s Market for anyone who would like to learn more about raising chickens at home.

Still a family-owned business, OK Hatchery Feed and Garden Store in downtown Kirkwood began as just what the name implies in 1927, and they can chronicle the last 90 years of poultry raising in suburban St. Louis. “We haven’t operated as a hatchery since 1940,” says Mark Krieger, one of the current owners. By 1990, the interest in chicken raising had dried up and they stopped handling anything involving poultry for 10 years. “Then, all of a sudden, the backyard chicken craze started,” he recalls. These days, they mostly deal in feed and supplies. “People do come in and sign up to order different breeds but the chickens we deal in are mostly pre-sold,” he says.

“It’s the whole slow-food trend,” Mark offers in suggesting what brought chickens into back yards. “People are raising chickens for the eggs; we seldom see any interest in meat breeds. They are surprised to find out what good pets they make. They seem to be more personable pets when people raise them from small chicks.”

Mareda Eckert of Kirkwood leased Ruby and Roxy (most people name their chickens) from The Easy Chicken for the summer of 2015. “Maybe it was a mid-life crisis,” she laughs. “I grew up outside a small town with chickens, ducks, sheep and so forth,” and liked the idea of having chickens, she explains.

The experiment proved highly successful. When she was outside, she let her chickens roam free in the garden. “They were so tame; if I left the patio door open they would go into my sunroom. When it was time to go back into the coop, Ruby and Roxy, lured by table scraps, happily trotted back into the enclosure.” Last summer issues with an elderly dog prevented Mareda from keeping chickens but she is now all in, having purchased chickens and permanent coop from The Easy Chicken.

Cathy and Charlie Duggan of Glendale rented chickens from The Easy Chicken a year and a half ago much to the embarrassment of their teenage children. But the whole family quickly fell in love with raising chickens and went on to purchase their chickens, adding a permanent coop and an enlarged chicken enclosure. “They have definite personalities,” Cathy says of their three-chicken flock. “It’s almost like having pets. They’re always looking for us to come outside and bring them a snack or come into their enclosure. Plus we love getting the eggs every day; that’s a bonus and they are great composters.”

The matriarch of the St. Louis backyard chicken world has to be Joy Stinger of Clayton, who has been raising chickens, using her garage as a coop, for 30 years. First attracted to the breeds that lay eggs in pastel colors, (“Wouldn’t it be wonderful not to have to dye Easter eggs,” she thought), she went to the City of Clayton to ask about ordinances. “It was told I could have any kind of farm animal as long as it wasn’t a disturbance to my neighbors,” she recalls.

These days, things have changed, as many municipalities now have ordinances specific to chickens. Joy now has a permit good for three years… and will apply for another permit when that one is up. “The chickens are very good garbage disposals,” she says, “and the eggs really do taste better. So many friends of mine who are also in their 80s are moving into villas. I am going to be doing this forever.”