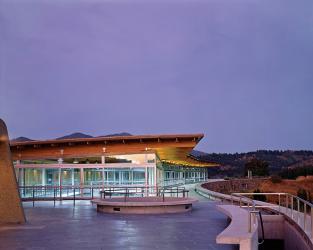 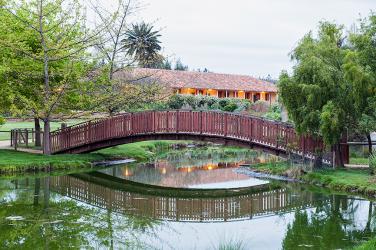 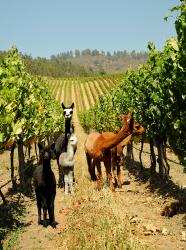 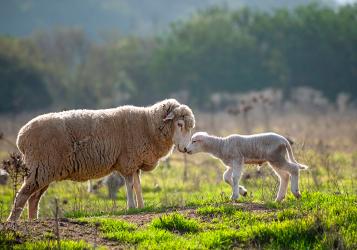 Here we are in fall and you’re probably scratching your head thinking, “why are we talking about white wines as the foliage is in its full Technicolor splendor and the temperatures are dropping about as quickly as the leaves?”

Aside from smashing the old adages that one should drink white wines only in hot summer weather and red wines to warm the body against winter’s chill, the dishes that talented Chef Gian Nicola Colucci from Cielo, at the top of St. Louis’ Four Seasons Hotel, has created work especially well with white wines from different grapes grown in radically different parts of the world.

A really inventive twist using a number of foods that have become staples of most restaurant menus – butternut squash, beets, burrata cheese (mozzarella with cream in the middle) – become an appetizer of compressed butternut squash with orange beets and burrata with a fresh parsley sauce drizzled over it all.  Quite a number of tastes – sweet, salty, creamy, earthy – on one plate. The chef recommends the unique Eastern European grape, Gruner Veltliner, that has typical flavors of lemon, pepper and spices. While likely native to Austria, Gruner is now planted in many parts of the world, from Australia to many colder-weather parts of the United States, like New York State’s Finger Lakes wine region in the Northwestern part of the Empire State, much closer to Canada (and Missouri) than to New York City.

A fine example of the wine, and very reasonably priced, is Count Karolyi Gruner Veltliner, grown and produced right next door to Austria in Hungary’s Pannon wine region. The cultivation of grapes in this middle part of the country go back to Roman times and, though known primarily for big reds, the Gruners from this region are almost textbook in their expression of the grape, and therefore perfect complements for the flavors cited in the above creative starter.

I suppose we are getting a little more traditional by serving white wine with fish, but the challenge is which white wine can stand up to the smoked bacon, red cabbage and sweet potatoes that have been added to monkfish. In fact, the monkfish is wrapped in the smoked bacon prior to cooking, so the rich, salty, smoky flavors of the bacon are quite prominent in the dish.

Like Hungary, another country not really known for white wines is Spain. The red grape Tempranillo is “El Rey” (the King), especially in the country’s famed Rioja wine region. But the white knight from that region is the native Viura grape (also known as Macabeo). It has enough acidity to stand up to rich foods, and a combination of fruit and floral notes that smooth out the smoke while not overwhelming the fish’s subtle flavors. There are not many Viura varietal wines to be found in the U.S., so St. Louis wine-lovers are particularly blessed that Bodegas Muriel’s Blanco is on retail shelves…also at very gentle prices (under $15).

While the two white varietals above are not all that well known, the next grape chosen, to accompany an unusual melange of vegetables, cheese and nuts, makes one of the most popular white wines in the world. Sauvignon Blanc is grown in pretty much all of the fine wine regions of the world and is considered the grape that brought fame and fortune to the New Zealand wine industry. While most New Zealand Sauvignon Blancs have the distinctive grapefruit and herbaceous nose and palate, the same grape from other countries, like Chile’s western coastal area of Casablancas, are usually filled with tropical fruit flavors and a fresh, almost saline, composition.

We’ve paired one of the most respected of these Chilean Sauvignon Blancs, EQ Coastal Sauvignon Blanc with the composition of local winter root vegetables with a goat cream cheese, spicy mint oil and toasted almonds. The spicy mint oil is the key to why EQ Coastal is such a good match for the dish.  It quickly reveals a crisp minerality that, combined with the saline notes captured by the sea breezes from a coast only a few miles from the vineyards, battles in one’s mouth to a satisfying draw with the heat of the oil, releasing the mint’s cooling properties even as it’s stimulating the quieter almonds and goat cream cheese.

I think I’ve proved my point that it’s not the temperatures outside, but the tastes of the dishes being served that should inspire what one drinks. And, the finale of this feast, a dessert called Chocolate Sensation, is a coda to above lesson learned above. When faced with a chocolate dish, I’m afraid I have to sneak in one red wine, albeit fortified and irresistibly sweet. There are many excellent reasons why Port wine, especially tawny ports that are identified by the years spent ageing in oak barrels (10, 20, 30 or 40 years), are fabulous with chocolate.  The typical aromas and flavors of dried fruits, candies (like pralines and orange confit), and tobacco are often paired with chocolate itself as desserts and even the many gourmet chocolate bars in various exotic flavors now on the market. So, of course a sip of a wine with those flavor characteristics is going to be heavenly in your mouth after a bite of one of the three different chocolate desserts that make up the dish.

There are many great aged tawny ports on the market, and not all of them these days are coming from Portugal.  But, if you can find the adorable squat glass bottle that houses Quinta do Vallado’s 10 Year Tawny Port, from one of the oldest and most storied Portuguese wineries in the Douro Valley, grab it and your favorite chocolate dessert (or even a hunk of England’s famed Stilton Cheese) and savor it while you contemplate the wonders of your “white night” of wine.