The Missouri Botanical Garden will welcome visitors in early 2018 to the reopening of Henry Shaw's Museum. 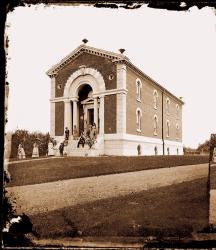 Opened in 1859, Henry Shaw's Museum was the scientific heart of the Missouri Botanical Garden for more than a century.

It housed the Garden’s original library, herbarium and natural history specimens. Over the years it also was used as office space, a research lab and as a restaurant. The museum building was closed to the public in 1982 and only opened on special occasions including annually on Henry Shaw’s Birthday. When Dr. Peter Wyse Jackson became president of the Garden in 2010, he recognized the importance of reopening this important building.

With generous donor support through the Garden for the World capital campaign, it will open again in early 2018 as the Stephen and Peter Sachs Museum. The building will be a unique gathering space and will showcase some of the Garden’s historical collections and artifacts.

An addition on the building’s east side will feature a fully accessible entrance, elevator and expanded restrooms. Following the standards for the treatment of historic properties by the National Park Service, the new addition is required to look different from the original building in order protect the integrity of the historic building.

The Garden looks forward to welcoming visitors in 2018 to celebrate the reopening of this scientific and historical treasure.