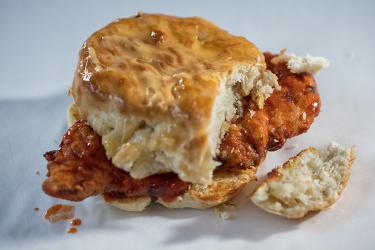 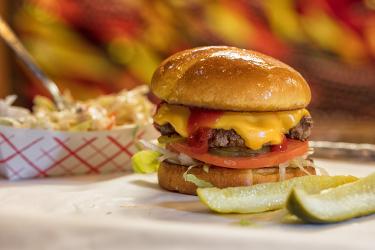 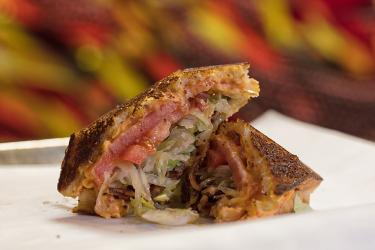 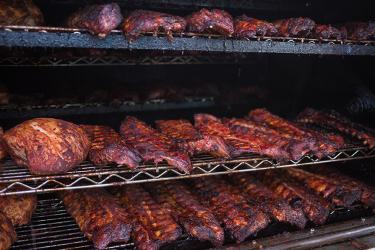 Once upon a time, a beautiful kitchen princess met a ruggedly handsome pitmaster prince and merged two culinary kingdoms, and they all ate heartily ever after…

The savory things conceived in the kitchens of Sugarfire Smoke House are the stuff of foodie fairy tales. Much munched and loudly lauded, the award-winning barbecued brisket, pork, turkey, chicken and ribs coming out of this duo’s busy smokers have garnered them a multitude of loyal subjects. In any given day, ravenous throngs chomp through one ton of meat at each location, putting Sugarfire on the map with some of the mightiest barbecue joints in the Midwest. “I consider St. Louis one of the best barbecue places in the country,” Chef Johnson says. “We have Pappy’s, Bogart’s [and] Salt + Smoke is great as well. All these fantastic restaurants in the Barbecue Triangle with Memphis and Kansas City.”

Johnson, who cut his culinary teeth under Emeril Lagasse’s wing, knows sophisticated food. He went on to open St. Louis hotspots like BARcelona, Momo’s and Roxane before teaming with fellow chef—and girlfriend—Christina Fitzgerald. They now own Hi-Pointe Drive-In and six Sugarfire restaurants and are working to open another several locations in Missouri and Illinois in 2018. The two are well-rounded and worldly, and bring their sophistication to Sugarfire’s everyman fare.

“Barbecue is pretty simple, but it requires patience,” Johnson says. “Some people try to rush it or have some magical injection or rub for the meat, but ours is really a simple rub. Salt and pepper and a couple of spices—and time and heat!”

Simple, of course, does not mean easy, and it certainly doesn’t mean boring. Johnson and Fitzgerald have been known to place smoky goodness in all kinds of creative configurations. A past special, Sweet Baby Cheesus, stacked a double burger, bacon and a fried egg between two grilled cheese sandwiches. When it’s available, the Rack and Cheese offers a hearty side of mac and cheese teeming with rib meat. Currently, big appetites can enjoy two of Mike’s favorites, beef brisket and flavorful housemade sausage, on the Big Muddy sandwich.

The partners encourage the chefs at each of their locations to mix it up, particularly with sides and specials, so there’s something unique at every smokehouse. Top off all the savory goodness with a homemade pie, milkshake or a boozy adult shake for an epic meal with a happy ending. Legendary.

Barbecue enthusiasts can get their fill of Sugarfire’s signature flavors at the Cooking School on Tuesday, Jan. 9, at AUTCOhome from 6:30p.m. – 8:30p.m. Learn how to make three of Johnson and Fitzgerald’s favorite gustatory splurges in one masterful meal:

PBLT: Didn’t think a BLT could get any richer? The P in Sugarfire’s PBLT stands for pimiento cheese. The cheddar and cream cheese based spread pits its red pepper zing against salty black pepper bacon with a brown sugar rub. All that, plus the LT on buttered Texas toast makes this monster irresistible.

Chicken Biscuit: Thanks to a higher fat content, a marinated chicken thigh stands up perfectly to smoking and frying in this satisfying ‘wich. The kick of Nashville hot sauce and a sweet swirl of honey butter on the biscuit play together harmoniously. Plus, there’s a juicy secret to this dish that puts it over the top.