Go from summer to fall with an outdoor fireplace. 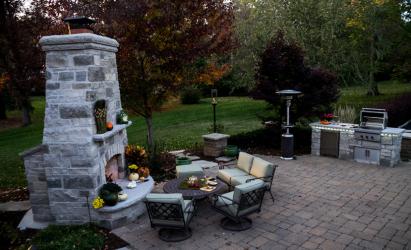 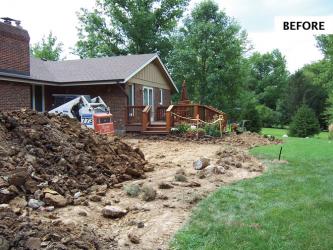 When you’re losing half of your body weight in sweat at the height of the summer, a patio season that lasts forever is probably low on your list of hopes and dreams. But when the chill and snap of fall and winter blow in, there’s nothing better than the crackle and pop of a warm fire to bring outdoor appeal to long, dark nights on the deck.

For residents with this brand of seasonal foresight, there’s no better partner in planning than Poynter Landscape Architecture & Construction in Ballwin. With mastery in pergolas, patios and all manner of outdoor living, Poynter considers the space around and about your dwelling as an extension of your home rather than an untended and, often, unused extra.

“Expanding outdoor living areas is actually really popular in this area,” explains Bob Wilhelm, vice president of sales at Poynter. “Of all the projects we do, at least 25 to 50 percent want some sort of fire feature.”

In the early 2000s, Wilhelm tore out an old Creve Coeur patio. “A few years later,” as he tells it, “I got a call that the homeowners wanted to explore outdoor living. They wanted a space for outdoor entertaining with large groups and a space to enjoy everyday. More than anything, they wanted a way to extend the season by adding a fireplace.”

The stone hearth, open-air kitchen and seating area that sprung from what was once a modest backyard can easily be classified as dream-house material. “The patio itself is about 1,500 square feet, plus the deck,” Wilhelm describes. “The homeowners wanted lots of counter space and seating in the kitchen area so it felt like, when someone was cooking, they were still a part of the group.” It all comes to life, he says, when the outdoor lights come on. But one could certainly argue it’s the opposite — when the lights go off and the fireplace roars—that enkindles any patio gathering.

The fireplace, statuesque and practical with built in log storage, beckons sitters to draw closer to the flame and one another when temperatures drop. “The ledge right in front of the hearth is perfect for resting your feet on,” says Wilhelm. “And having the seating area close to the flame lets people just sit and watch.”

For the other 25 or 50 percent of you who may be considering an outdoor hearth of your own, Wilhelm explains that — barring any restrictions from city codes — there are plenty of options to choose from at a variety of price points. “We have all different levels of concrete, and flagstone and bluestone. The price really varies depending on the size of the space and the types of materials.”

So if you’re not ready for the summer to end; don’t sweat it. An outdoor living area with all the amenities of a warm night by the fire may be one of the very best reasons to extend the season.