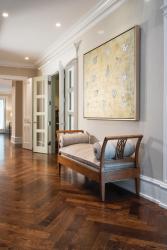 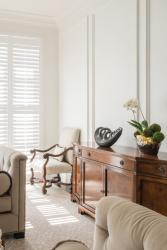 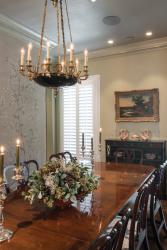 The dining room wallpaper is cleverly created from a photographic print of a luxurious silk wallpaper. Leslie purchased the chandelier in her native New Orleans decades ago. 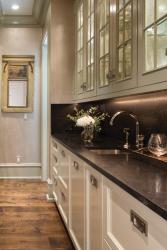 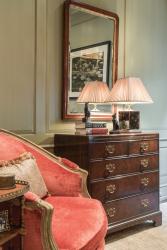 Antiques feature prominently in the Lux home, as in this cozy bedroom. 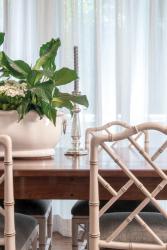 Surrounded by windows, the casual dining area at the back of the home offers a cheery atmosphere. 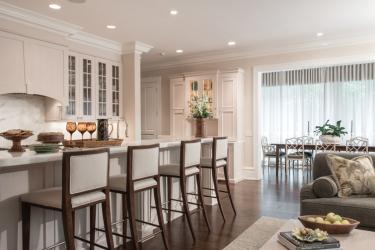 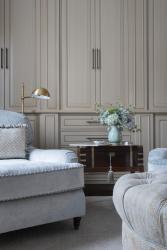 A wall of windows that once backed the master bedroom now features ample storage. 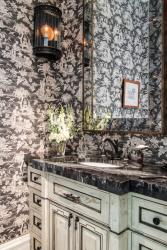 The spirit of New Orleans is conjured in the colors and fixtures of the main-floor bath. 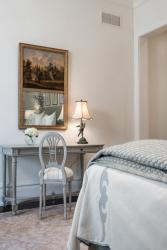 An antique trumeau and faux-painted table are a welcoming makeup area in the guest bedroom. 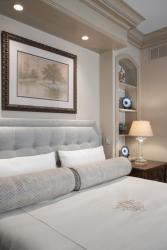 China collections now have a choice place on shelving in the master bedroom.

Before moving in August 2017 into their nearly 5,000-square-foot home on North Central, Leslie and Paul Lux occupied a larger home in Ladue. Leslie, an interior designer and owner of LPL Interiors, spearheaded that renovation in 2002 and filled the home with treasures old and new: china, tortoise-shell pieces, glassware and, most important mementos salvaged from her late mother's New Orleans home in the aftermath of Hurricane Katrina.

So, when it came time to redesign the Clayton home the couple knew they couldn’t bring everything with them into a space the third of the size of the one they were vacating. “I had to purge a lot of things,” says Leslie. “It hit me when I helped move my mother-in-law out of the home she had for 40 years and the thought that some day my children would be doing the same.” Leslie gave first dibs on many things to her three adult children, then donated and sold others. “They’re just things. You have to make it non-emotional — and for being an emotional person, I did handle this very well.”

Before the purge, though, the couple had to restructure to find out what kind of space they would ultimately have to work with. Leslie collaborated with architect and longtime friend David Pape of Pape Studio Architects and contractor Markway Construction to take out a second, unnecessary ground-floor bathroom near the existing bar and expand it into a combination bar and butler’s pantry. Bumping out the dining room wall brought additional bar/pantry space and moving the wall between the dining room and living room replaced the square footage in the dining room, where it was needed.

Then there was the remaining main-floor bath. “If the door was left open, there was the toilet staring at you,” Leslie says. Its position just inside the front entrance was not how she wanted to greet guests, so David moved the stairwell out of its way, expanded the bathroom into that spot and repositioned its door so the toilet is never visible from the entrance. A small, glassed-in foyer outside the original front door adds a bit more buffer.

While the Luxes were willing to pare down their belongings, they still put a heavy emphasis on storage. “It was the biggest line item in the whole house. We like to entertain, so we needed a place for dishes, serving dishes, things like that.” David solved the storage need by dedicating part of the basement to a small room for kitchenware storage with separate silver and linen closets inside. St. Louis Closet Factory designed and installed the storage fixtures throughout the home.

Aside from upgrades to electric and plumbing, other restructuring was relatively minor, particularly in the kitchen. The cooking area is much the way the previous owner left it, with thick marble countertops, upscale gas stove and neutral cabinetry. “The only problem with it is it didn’t have enough storage for me,” says Leslie. She solved that with a custom hutch and cookbook storage, both painted to match the existing cabinets.

It’s the adjoining living area where the family — Leslie, Paul, their kids and grandchild — spend the most time hanging out, watching television or ducking out the back door for a dip in the pool. Flooded with natural light, it’s warm and cozy, so Leslie designed accordingly. “I didn’t want to yell at my kids if they ate a sandwich on the couch, so I just did everything in durable outdoor fabric. It’s not going to fade like other fabrics, either.”

Now, there’s a place for everything important to Leslie and Paul, and everything is in its place. The butler’s pantry, Leslie’s favorite room in the entire house, holds some of her colorful Royal Crown Derby china, as well as crystal barware she’s picked up over the years. Hidden in the cabinetry is a wine fridge and an ice maker that produces the fun, Sonic-style nugget ice she loves to crunch.

Some of Leslie’s most sentimentally valuable possessions enjoy prominent positions in the new home. “I had to bring the sideboard and tea service. It’s a 17th century sideboard, burled walnut. I’ve had it forever. When I die, it’s going on top of my grave,” she quips of her prized dining room piece she bought in her native New Orleans. Atop it is the silver tea set. “The tea set was pulled out of the Katrina muck from Mom’s house. I think I got maybe three pieces of art from my mother’s house. The rest was destroyed.”

In fact, there’s a lot of New Orleans in the Lux house. Hanging over the dining table is an ornate black-and-gold chandelier she purchased decades ago. It’s similar to one she recovered from her mom’s house and which now hangs in the main-floor bathroom. Two trumeau mirrors grace the walls of the pantry and the guest bedroom upstairs. The dining room, master bedroom and Paul’s home office house the couple’s favorite paintings.

Other touches are more subtle and evocative of the Big Easy: wallpaper patterns that call to mind vintage French decor; wrought-iron balcony and stair rails; welcoming gaslights at the front door; and faux-painted walls in the main staircase that conjure up the lime and gypsum plaster seen so often in old Southern homes.

At press time, Leslie was in the process of finishing the front living room, a space that may get ample use for games of pitch and playtime with her grandchild. The rest of the home has largely settled into a comfortable, finished state, and all the keepsakes and fixtures that remain appear as though they were always meant to be.

Leslie and Paul hardly notice what they parted with and Leslie spends far less time maintaining and managing the house. “You can’t keep everything, and not everything you want to keep will work anyway. Some of my best pieces I had to get rid of,” she says. “But I enjoyed all those things for a long, long time and now someone else gets to enjoy them.”