Armed with a file of ideas and a detailed wish list, this creative couple constructed their dream home in collaboration with their trusted design/build team. 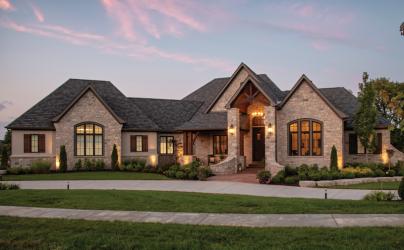 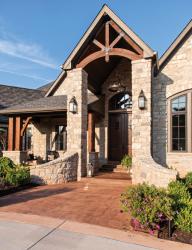 A stone facade on the exterior by Spencer Brickwork is enhanced by the cedar trusses for a rustic, French country feel. Landscaping by Surecut Solutions. Opposite page: What front porch would be complete without a traditional porch swing? Liston Design Build used stamped concrete flooring and a wood treatment on the exterior porch ceiling to elevate the style of the home. 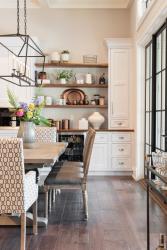 A breakfast nook off of the kitchen looks out to the covered, screened-in porch. Opposite page: The screen-in porch is an extension of the couple's indoor living space with a dining table and furniture from World Market and Grandin Road. 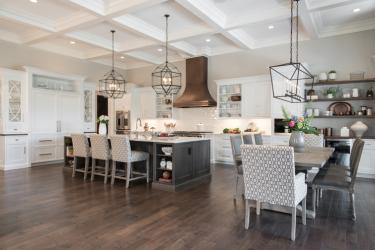 The kitchen is open to the great room and features an oversized quartz-topped island fabricated by Russo Tile & Design, Viking six-burner range by AUTCOhome, built-in coffee machine plus plenty of open shelving and cabinet storage. The massive hammered copper kitchen hood is framed by two geometric chandeliers from Metro Lighting. 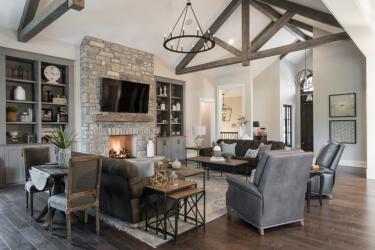 Vaulted ceilings with cedar beams carry your eye from the entry foyer through to the great room, which includes built-in bookshelves and a floor-to-ceiling stone fireplace. 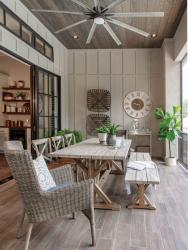 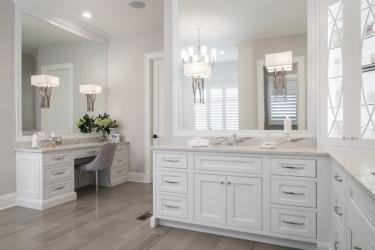 The master bath is serene yet sophisticated with two vanities, a makeup area, large shower and access to the master closet. Cabinetry by Beck Allen. Plumbing by Premier Plumbing Supply. 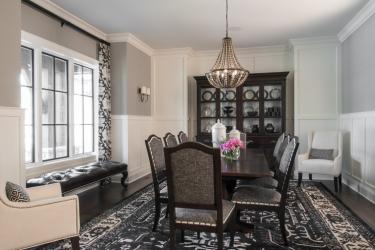 The dining room furnishings, rug and window treatment were selected from Ethan Allen. Windows by Kolbe Windows & Doors. The Cameron dining table in pekoe finish is accompanied by eight Hayden tapered-leg side chairs covered in a tweedy charcoal fabric. 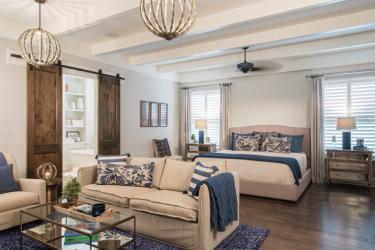 A sliding barn door separates the master bedroom from the luxurious master bath. 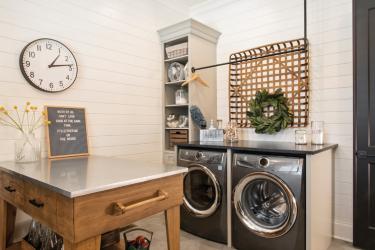 The flex room is one of the homeowner's favorite spaces in the house with a desk, large work table and washer/dryer. The flex room also connects to the master closet making laundry day a breeze. 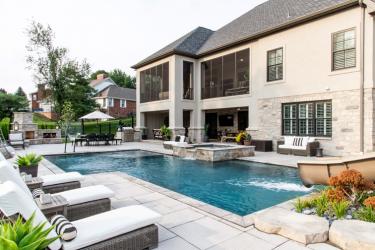 A pool with spa, outdoor fireplace and outdoor kitchen were must-haves on the couple's wish list so they could enjoy summers outside entertaining family and friends.

The couple's daughter's room is every teenage girl's dream in shades of blue, green and pink. 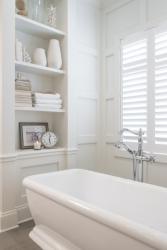 With her tub already selected before building began, the floor plan was amended to accommodate for the tub by bumping out the exterior wall making a cozy nook for relaxing baths. 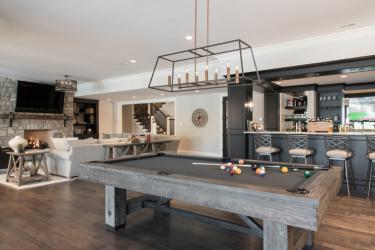 The lower level is all about entertaining with a custom built bar, large open living space and pool bathroom. 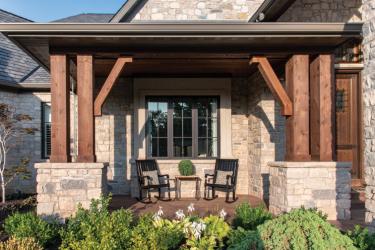 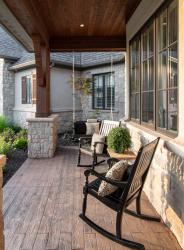 When the to-do list of projects and renovations ran out at their current residence, a St. Charles couple set their sights on something bigger. “We decided we wanted to build,” the homeowner explains. “There are not a lot of areas to build north of highway 70, but we were lucky to purchase the last two lots available in the neighborhood.”

Only a few miles from their previous residence, the new plot of land was purchased in the summer of 2015 and the planning phase began right away. The couple turned to longtime family friends and construction gurus Keith and Jeanne Liston of Liston Design Build to help them make their dreams a reality. “We have worked with Keith and Jeanne for more than 15 years,” the homeowner says. “They added an addition to our old house and renovated our master bathroom, kitchen and outdoor space.”

With a file full of ideas from home design magazines, Houzz and Pinterest, the homeowner had a pretty clear vision of the basic elements their new home would have to include. Jeanne says that her pre-planning ideas helped kick things in motion. “She did lots of prep work at the beginning which helped make the whole process go smoother,” she says.

The initial concept for the home was based on the couple’s lake house, which was a ranch. “We like how we live at the lake and how it works for our family,” the homeowner says. With a basic plan for a ranch with bedrooms split between the two sides of the home, the couple’s other wishes included a screened-in porch, flex room, finished lower level, pool and large entertainment area.

The homeowners along with Liston worked with architect Larry Spraul of LR Spraul for more than a year to conceptualize and finalize the plans for the design.

Keith played a big part in the initial meetings between the client and architect to develop the overall floor plan and the best way to utilize the lot and site - the "build" portion of the home.

During this year of planning, the homeowners worked closely with Jeanne to make furniture and finish selections, getting most items ordered before they even broke ground in the fall of 2016. “We selected and had a vision of what every room would look like before we even had the plan finalized,” Jeanne says. “It made the whole process go smoother and be more enjoyable for all.”

Liston says this approach is the philosophy of Liston Design Build. All the work is done up front prior to starting the building phase so that everyone involved has a good idea of what the end result will be. It allows tweaks and changes to be made to the plan to make the client’s desired design a reality and makes the whole experience more custom to their wishes. “Their philosophy really works,” the homeowner agrees.

When all the details had been worked out, Liston broke ground in the fall of 2016 and the home began to take shape. For the exterior, the homeowners knew they wanted a stone facade. Cedar trusses and rock in the landscape create a rustic, French Country look. A large front porch, with a swing the homeowners just love, creates an inviting first glance into the home. A plank stamped concrete porch and tongue-and-groove wood on the exterior ceilings elevates the level of style and craftsmanship of the home.

An oversized front door and transom window lead you into the home’s entryway where the first thing your eye is drawn to are the destressed beams that mimic the exterior. “We decided to carry the vaulted ceiling from the front entry into the great room at the back of the house adding the stained beams to draw the focal point up,” Jeanne explains. “It gives a very dramatic look when you walk in the front door.”

The great room features a stunning floor-to-ceiling stone fireplace flanked by custom-built bookshelves painted dovetail. “The darker paint color provided depth and worked well with the interior color scheme," Jeanne says. The homeowner knew specific pieces would hold certain places in the bookshelf, so Liston’s craftsmen built the shelving on site to the exact sizes needed for each special object to fit.

Many of the home’s important pieces were purchased new from Ethan Allen, and the homeowner worked closely with the furniture company’s designer Leslie Rust to get the size and scale of the great room seating arrangement just right. The homeowner selected furnishings and finishes that would be timeless and classic. She describes her style as traditional, yet cozy and comfortable.

At nearly 7,500 square feet, the house still feels very warm and inviting. Engineered hardwood in a maple laid in varied widths blankets the entire home’s floors, and Liston selected Sherwin Williams’s agreeable gray for the walls. “It’s a warmer gray that works well with everything,” she says.

One of the couple’s main requirements in the new home’s design was for the main living spaces to be open. The kitchen flows right into the great room with a massive quartz topped island separating the two spaces. Two oversized geometric pendants from Metro Lighting illuminate the island and perfectly frame the hammered copper kitchen hood. The white cabinetry wall by BeckAllen is broken up by open floating shelving for visual interest. The homeowner loves to cook, and she knew she wanted a Viking six-burner range and double wall ovens, which were sourced from AUTCOhome. Other special touches include a built-in coffee machine and beverage refrigerator. “It is such a good cooking kitchen, and I love all of the counter space,” the homeowner says.

Just off the kitchen is a breakfast area with a long farmhouse table from Restoration Hardware. The table is set in front of a wall of glass doors overlooking the back screened-in porch. All of the window and door frames in the main living spaces are painted black, which Jeanne says adds so much depth and drama to the room. “It was a scary decision, but I love it now,” the homeowner says. “We looked at each and every piece of trim while the painter had the brush in hand to decide what would stay white and what would be painted black,” Jeanne adds.

One side of the kitchen/great room space is the master bedroom and flex room as well as the side entry from the five-car angled garage. The flex room was an important space to the homeowner who uses it as a work area. Decked out with a desk space, washer/dryer, plenty of storage and counter space and work table perfect for folding laundry or wrapping Christmas gifts, the room has a pocket door that connects it to the master closet, making putting away laundry a breeze. “The flex room and master suite were really designed to fit the way the couple lives,” Jeanne explains. “The husband can get up for work, shower and get dressed and then slip out of the room through the flex room without disturbing his wife.”

Sliding barn doors lead the way into the luxurious master bathroom, which includes a makeup and hair area for the homeowner and her daughter, large walk-in shower and a freestanding tub with floor-mounted tub filler tucked into a bumped out alcove. “The homeowner had already selected the tub as we were working on the plan, so we were able modify the design and bump out the wall to get the desired outcome,” Jeanne says.

Other spaces on the main floor include a guest bedroom; the daughter’s colorful bedroom in shades of green, blue and pink; the husband’s study with custom-built bookshelves and the dining room, which the homeowner was initially against including in the home plan. “I’m so glad we decided to include the dining room,” she says. Liston built a nook into the space to house the homeowner’s hutch. Detailed paneling on the walls adds subtle texture to the space.

The lower level is a scaled-down version of the main living space and has the same flooring, built-in bookshelves and stone fireplace facade as the great room. It is a perfect place for the couple to entertain and spend time with family and friends. Liston built a custom bar with lots of storage and even included a kegerator that the husband can access and change from a storage area, allowing it to be concealed to look like cabinetry. Another bedroom, laundry area and workout room are also in the lower level as well as a full bathroom that can be used by pool guests. A wall of doors open to the lower level outdoor entertaining area that includes a pool, hot tub, fireplace seating area and an outdoor grill and kitchen.

The homeowners moved in in March 2018 and after living in the home for a year, the homeowner says she wouldn’t change a thing. The couple is forever grateful for the collaboration with Keith and Jeanne Liston in creating their dream forever home. The homeowner says, “We feel like we’re at our lake house when we are at home.” Comfortable, cozy, classic and planned to perfection.