Clever sourcing and a hands-on approach created a new Wildwood home with lots of history. 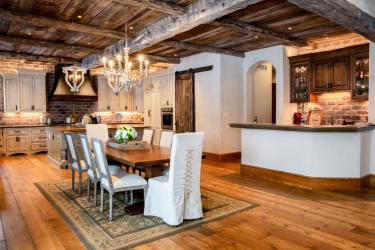 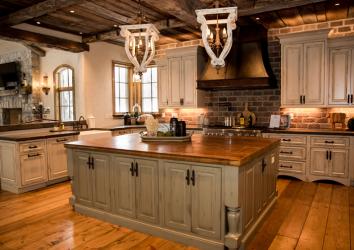 Jeff and Gina Schindler’s Wildwood home may be less than two years old, but it has generations of history built into it. Not only did Jeff, a longtime builder, build the family home, but he personally gathered many of the reclaimed materials that now lend it so much charm. This is particularly true of the kitchen and hearth room, where interior designer Ellie Redders incorporated the wood and brick Jeff wanted to use in the design.

“The (kitchen ceiling) beams came from a barn that we took down outside of Washington, MO,” says Jeff of the hand-hewn wood. “The big beam in the kitchen was a sleeper beam in the barn that held up the floor above it. It was an 1880s barn. We took some beams from a barn in Jefferson County, too. Good German engineering and ingenuity with different dovetail joints that weren’t widely used in the area.”

Planks from a 1930s railroad boxcar were incorporated into the kitchen floor by Historic Floor Company and also make up the top of the large kitchen island. “They’re 3 inches thick and real tongue-and-groove, and it was perfect for it. It has scrapes and gouges and lots of character,” Jeff says. With two sons, ages 8 and 11, and two dogs in and out, the couple appreciates a space that is not so delicate they can’t live normally as a young family tends to do.

Together with the Schindlers, Ellie helped plot the use of the reclaimed wood, as well as the Purington paver bricks Jeff got from a street in Chicago. The bricks adorn the kitchen backsplash and found a home in the mud and laundry room. Next, the designer turned a critical eye to selecting finishes such as lighting, hardware and wall coverings that would contribute to the warmth of the space without making it too dark.

“The space has so many textures and layers that all work so well together,” Ellie says. “The feeling being what it was, things could get dark really quick, so it was important to keep the walls light and keep that light linen in the furnishings.”

Ellie loves to “go big” on lighting and hardware but has an eye for keeping things in scale. While the light fixtures in the kitchen and hearth room are large, the openness of them prevents them from swallowing up the space, she says. Similarly, she scaled up the kitchen hardware to make a statement without drowning out anything else. “The island is a big, beefy piece, so little pulls just didn’t work.”

Wood, stone, warm neutrals and a big touch of muted green create a French Provencal vibe that echoes the rural-countryside look of the landscaping outside.

For Jeff, it’s easy to feel transported as he stands in his kitchen gazing up at the old nail holes and scratches made during decades of use, and the Roman numerals the original German builders carved in the wood beams to organize each piece. “Right above my sink you can see the number 13,” he says. “It’s neat to think of all the things that went on for 140 years in that barn. It has so much unique history to it. I like to daydream.”