Forney’s new design wrapped the existing porch around three sides; rebuilt an old addition connecting to the garage; repositioned the front entrance, adjusting a dormer for symmetry; and replicated the vintage sawtooth detailing in the gables. Windows and doors provided by Pella. 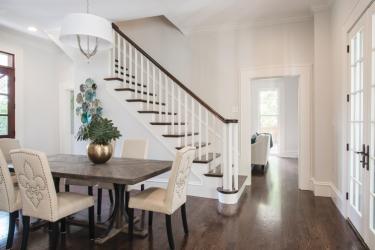 The central staircase was opened to the dining room, allowing additional space for the entry foyer and hall. 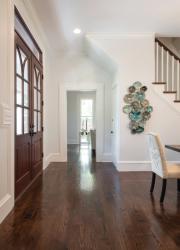 To the left, the entryway to the living room was widened. 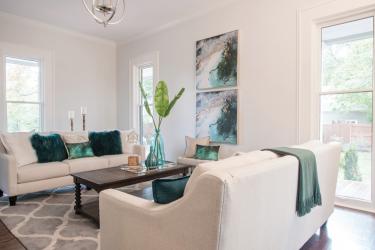 Although taken down to the studs, the living room’s millwork was saved, as were the 8-foot Jefferson windows, which were reglazed. Throughout the main level, the original flooring was replaced with red oak in random widths. 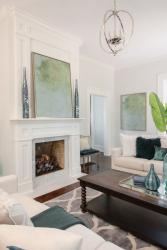 The living room fireplace was reworked in authentic period styling. 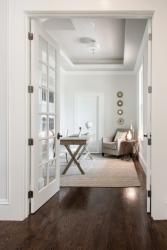 Once the kitchen, this space at the front of the home was converted to a den.  Adjoined by a new bathroom, it would be equally suitable as a guest suite. 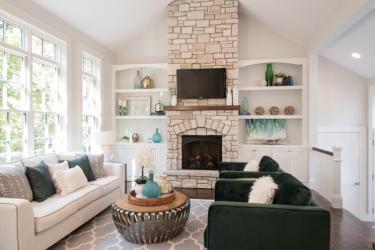 Demolished and totally rebuilt, the old addition was transformed into a gracious family room. The vaulted ceiling extends the roofline to include the garage; full-height windows overlook the rear yard; and a stepdown on the right accesses the family entry and garage. 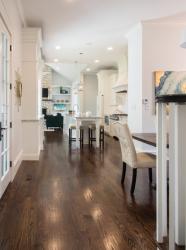 Open to the family room and dining room, the kitchen is convenient to both of these entertainment/activity areas. Designed by Beck/Allen Kitchen & Bath, the kitchen is centered by a 12-foot work island and appointed with traditionally styled cabinetry, fixtures, and hardware. 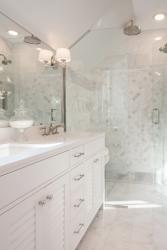 Upstairs, two of the original four bedrooms were combined to create a generous master suite.  Fresh and bright, the master bath features dual vanities with louvered cabinet doors and a glass-enclosed rainhead shower. Both the kitchen and bathroom boast work from Stone Fabricators. 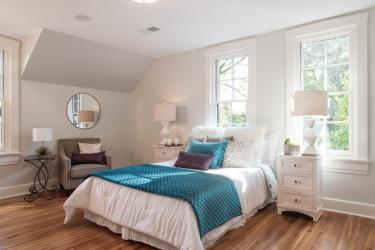 Windows on two walls fill the master bedroom with natural light. Still in good condition, the heart pine floors throughout the upper level were refinished to restore their original beauty. 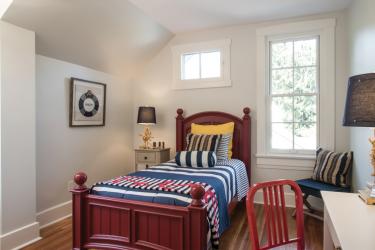 Formerly interconnected, the two additional bedrooms were separated and provided with walk-in closets and a full, Jack and Jill style bathroom. 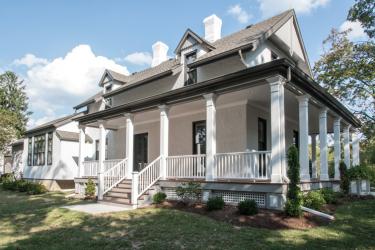 Now extended to the rear of the home, the wraparound porch adds elegance and authentic character to the Couch House from all sides. The stepdown family entry is equipped with a “mud room,” including coat hooks and a handy bench.

If ever a vintage house could be described as a “survivor,” this might be the one.  Built in the mid-1800s on nearly 60 acres of land in Kirkwood, the stately Gothic Revival two-story was locally known as the “Couch House,” so named for a prominent early owner. By 1909, the residence was still imposing, but most of the surrounding property had been sold off, and the town had begun to grow around it.

Over the ensuing decades, subsequent owners made numerous alterations to the structure. Indoor plumbing and central heating were installed. Much of the original board and batten siding was covered with stucco. The front entry was relocated to adapt to the neighborhood’s new street grid, and a garage was built with a room addition connecting it to the house.

When a young couple viewed the property in 1962, the house had sat empty for some time. Seeing it as a “diamond in the rough,” they acquired, repaired and updated the home for themselves and their infant son. As a result of their efforts, the Couch House was listed on the city’s historic register, and the family enjoyed their “country estate” for more than 50 years.

In 2014, the son, Chris Franks, inherited the house where he’d grown up, and he and his wife, Sherry, began looking for an architect who could bring the structure up to current standards and improve its curb appeal while preserving its historic character. Research led them to Jane Ann Forney, AIA, NCARB, whose experience and previous renovations seemed well-suited to their objectives.

Having earned a 5-year degree in architecture from Notre Dame, Forney came to St. Louis in 1991 with her husband, who is also an architect. She worked for two major architectural firms here, simultaneously undertaking several residential projects in China. Tired of traveling and ready to strike out on her own, she founded FORNEY + architecture, LLC in 2010, offering a full range of services from site planning through construction.

With an old photo of the Couch House as her inspiration, Forney began a design that would restore the exterior details, wrap the existing porch around three sides of the home and reconfigure the interior spaces for today’s lifestyle. Meanwhile, the homeowner, who intended to serve as builder/general contractor, was methodically clearing the proposed improvements with Kirkwood’s architectural review board and the historical commission.

To give the home “street presence,” Forney’s plan repositioned the front entrance, adjusting a dormer on the upper level for symmetry and either restoring or replicating the wraparound porch’s architectural features. Overhead, a decorative beadboard ceiling and sawtooth detailing in the porch and dormer gables revive the original Stick styling. Completing the effect, a curved walk, carefully looped around an existing redbud tree, further emphasizes the entry approach.

Inside, major changes were made to the original floorplan. The addition connecting to the garage had deteriorated badly and had to be razed and rebuilt. Forney designed the new space as a vaulted family room, extending the roofline to include the garage. Moving the front wall forward, she was able to gain sufficient space for a family entry, step-up mud room and a first-floor bathroom.

Elsewhere on the main level, part of the formal dining room was used to enlarge the entry foyer, and the central staircase was opened to the dining room and hall. Previously located at the front of the home, the kitchen was converted to a cozy den that can also serve as guest accommodations.

To the left of the foyer, the living room entrance was widened, and the room was taken down to the studs. The millwork was saved, however, as were the classic 8-foot Jefferson windows, which were reglazed. The newly designed island kitchen was moved to the rear, with access to the dining room on one side and open to the family room on the other.

The upper level presented Forney with several interesting challenges as well. When first built, the four bedrooms were all interconnected, which may seem odd to today’s privacy-seeking homeowners. A logical explanation was found during construction, when flues were discovered, indicating that the upstairs had probably been heated by a wood-burning stove and the rooms left open to circulate the heat. With the advent of indoor plumbing, a single bathroom had been installed on this floor later, serving all the bedrooms.

Revising the second-story floorplan, Forney transformed two of the bedrooms into a generous master suite with a roomy walk-in closet and a private bath with dual vanities. The two auxiliary bedrooms, both with walk-in closets, were separated, and another full, Jack-&-Jill style bathroom was added. As an extra touch of convenience, she also created a laundry with stacked washer/dryer on this level.

Once Forney’s architectural design had been approved, the homeowner, Chris Franks (a mechanical engineer) and his wife, Sherry, supervised construction, which took approximately two years. The exterior stucco was repaired and repatched. Flooring on the main level was replaced with red oak in random widths from four to six inches. Upstairs, the original heart of pine floors were still in good condition and only required refinishing.

French doors were installed in the formal dining room, leading to the wraparound porch. Designed by Beck/Allen Kitchen & Bath, the adjacent kitchen features transitionally styled white cabinetry and revolves around a 12-foot work island with overhang. Open to the kitchen, the vaulted family room is naturally lit by a wall of windows that overlook the lovely rear yard, and dominating this inviting space is a floor-to-ceiling stone fireplace flanked by full-height custom shelving.

Superbly redesigned and beautifully renovated, the venerable Couch House is once again worthy of admiration and a source of pride for the owners, whose goal was to salvage “a piece of history.”