Lake Living for the Long Run

A Belleville-area home gets a traditional and functional redo — that also makes the most of lake views. 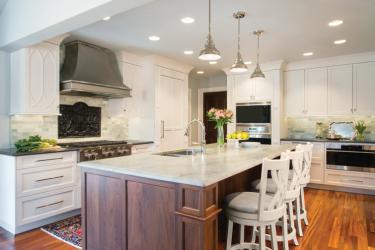 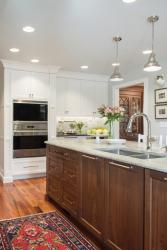 A plumbing catastrophe that damaged rooms on both floors was just the excuse Margaret Lowery needed to update a home that was stuck in the ‘70s and ill-equipped for her 70s. While she’s a ways away from that age milestone, she wanted designer Debbie Jacobs of Alspaugh Kitchen & Bath to use the opportunity to plan a home that would serve her needs for many years to come, whatever her physical abilities will be.

“Thirty years ago, I broke my back in a horseback riding accident. Three major reconstructive surgeries, a year in a body cast and countless hours in [physical therapy] learning to walk again, and I don’t take my mobility for granted,” Margaret explains. She worked with Debbie to not only plan reconstruction of the damaged rooms, but to reconfigure other areas of the home to better suit her needs.

The kitchen was dark and outdated and not entirely functional for a household where social gatherings are important. “We spent a lot of time planning the kitchen so that everything would be reachable within a single step. We planned the kitchen so that if I had to cook sitting on a stool or in a wheelchair, I could,” says Margaret.

Margaret designed a conservatory addition that would brighten the kitchen and provide a view of the nearby lake. Next, she answered Margaret’s desire for high-quality appliances with a Wolf range and convection steam oven, SubZero refrigerator, plus separate freezer drawers, icemaker and beverage center.

“On either side of the refrigerator and double oven, we built in 6-inch columns that hold oils, spices and cooking accessories,” Debbie says. “There was a cooktop with a brick surround before, so it was very closed off. [The columns] added an amazing amount of storage in a very small space, and it was a decorative element as well. She has a lot of appliances in there, so we had to make every inch count.”

Debbie made use of dead space for a custom walnut hutch where Margaret displays pretty china and glassware and restructured the room to create a butler’s pantry. An 8-foot island provides more usable counter space as well as a spot for guests to hang out. The layout gives Margaret easy access to everything with nary more than a step or two. “I don’t feel like I’m running a marathon to fix a sandwich or put away groceries …I can enjoy the most beautiful views of the lake and make a meal without becoming exhausted. I am also reassured that if something happens to my health, I will have a house that is functional for me to live in.”

And there are personal touches, too, like an antique fireback she purchased in Scotland and the Black Forest breakfast room table from Southern Germany. The pieces honor her father’s Scottish roots and her mother’s German heritage. “The heart of my home pays homage to my family’s past while allowing me to function well into the future.”