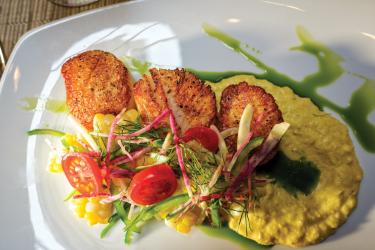 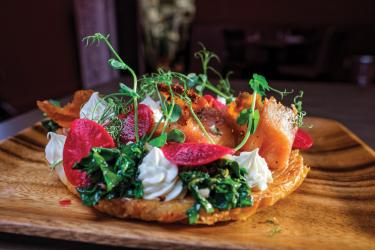 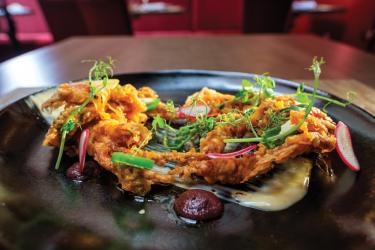 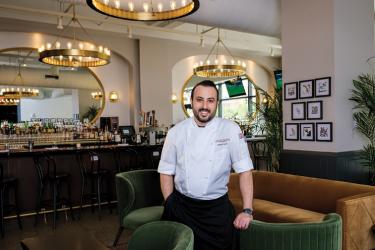 Robert Cantu already had celebrity-chef street cred when he threw his toque into the ring to head up New York restaurateur David Burke’s new St. Louis eatery, Grand Tavern. A lifelong resident of San Antonio, Texas, he once worked for “The Father of Southwestern Cuisine,” Dean Fearing, at his eponymous Dallas restaurant, where he honed his innate skills.

“I did have to prove my chops with a tasting menu,” Robert recalls of his “audition” for the James Beard Award-winning chef in 2018. He came through it, Iron Chef style, winning his spot, in part, with a clever caviar-tin-contained eggs benedict.

The creative plating of Grand Tavern takes place on the ground floor of the Angad Arts Hotel in Grand Center, a fitting locale for food with a flair for the dramatic arts. Hotel guests can select bold-hued rooms to suit their moods – Passion Red or Tranquility Blue, for example – and many items on the restaurant menu echo the theme. There, Robert’s take on “angry lobster” is a bit less spicy and goes by the name of Emotional Lobster Dumplings. (For diners feeling more hot around the collar than weepy, there is Angry Broccoli.)

True to the spirit of the arts district and Burke’s avant-garde aesthetic, the food is designed to please the eye as well as the palate. “All our dishes were made to turn heads,” says Robert. “The Clothesline Bacon and the lobster dumplings are our biggest sellers. They’re nice presentations, and when we torch food tableside, our guests like that.”

Southern Fried Crackling Pork Shank, one of his personal favorites, was inspired by his wife’s desire for a bit of crunch. “It’s braised with the skin on, and the skin is like pork rinds – bubbly and crispy.”    Lest one think that Grand Tavern solely brings a Big Apple sensibility to Middle America, Robert assures that locavores will find familiar comfort-food indulgences. Gooey Butter Donuts pay homage to St. Louis with a sauce inspired by the city’s favorite sweet. He’s also stepping into hallowed barbecue territory; by St. Louis Homes + Lifestyles' press time, he’s expecting to have a meat smoker on premises. In the meantime, patrons can enjoy simply seasoned barbecued and grilled dishes, from burgers and brisket to bison short ribs to filet mignon.