Betty Thomas of Interior Visions has applied her design mantra to this custom home in Ladue for two decades. 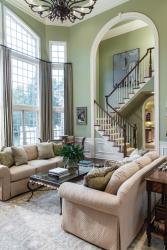 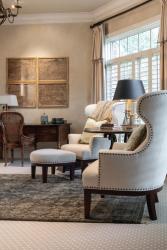 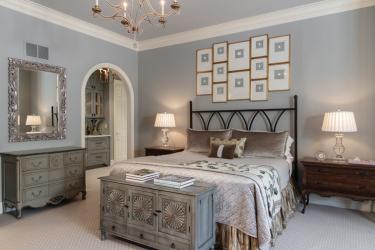 In the master bedroom, framed antique Italian intaglios are arranged above the wrought-iron headboard, and the soft blue/gray walls are complemented by an antique bureau and chest, painted and distressed in a related hue. 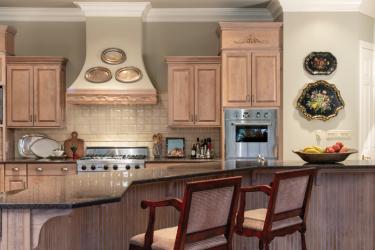 A few subtle touches gave the kitchen an updated look, including a lighter shade of French sage on the walls, new nickel hardware on the original chestnut cabinetry, and new Minton-Spidell bar chairs under the granite-topped island’s overhang. 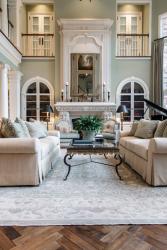 Redesigned with a custom Bourges mantel and overmantel, the great room fireplace was fabricated in cast stone by Tartaruga Design, Inc. and topped with an antique French Trumeau mirror. 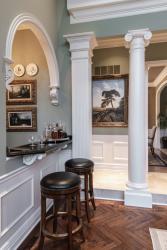 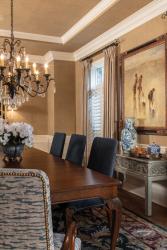 Welcoming dinner guests of all ages, the dining room was made less formal and child-proofed. A high-resilience surface was applied to the owners’ existing table, the chairs reupholstered in an interior performance fabric. Lighthearted artwork and an Asian-inspired side table provide stylish accents. 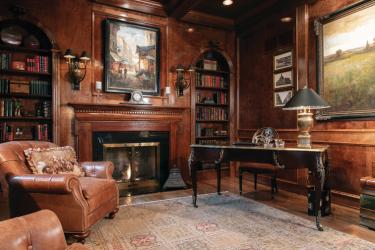 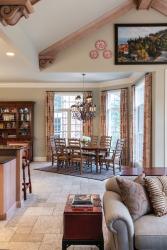 Open to the kitchen and hearth room, the casual dining area features caned ladderback chairs and an oval table in custom-finished hickory.  At the left, the original built-in recipe desk was removed and replaced with an antique Bausman English hutch.

Custom-built by Freeman Homes, this gracious residence is one of several the owners have built during their 40-year marriage. Both retirees from Purina, the couple had downsized at one point, planning to move to their second home in Florida. But the desire to stay close to family persuaded them to reconsider, and they decided to build another large custom home in Ladue.

St. Louis can be grateful for that decision, as well, since the two devote a considerable amount of their time to animal rescue and adoption efforts, volunteering and serving on the boards of various agencies — or as Diane describes it, “bringing pets and people together.” What makes this story so intriguing, though, is how the owners and their longtime designer came together.

Betty Thomas, ASID Allied, studied at Meramec Community College school of interior design, gained practical experience working with a local design company, then established her own firm, Interior Visions, in 1994. A few years later, Betty attended a party where the wife, Diane, also happened to be a guest. Although the two women hadn’t been in contact for a while, they’d been friends since grade school! And by sheer coincidence, Diane was looking for an interior designer to decorate a home they owned at the time.

From the outset, “Diane and I totally connected,” says Betty. “We can literally finish each other’s sentences.” So, the choice of a designer was never in question when the owners began construction of their current home in Ladue 20 years ago. “Betty has been involved since the first shovel went into the ground,” Diane recalls. And it’s a project that has been ongoing for two decades.

To keep the home current as their lifestyle evolves, the owners like to do a complete makeover of at least one room every year or so, Betty explained. With each upgrade, the styling has remained traditional, but the emphasis has always been “beautiful but livable, reflecting the activity level in the house.” These days, that translates to kid-friendly for the grandchildren who visit often and pet-friendly for the family cat and dogs.

Readily admitting that she is “totally visual,” Diane relies on Betty’s extensive resources to locate the quality, one-of-a-kind pieces that will perfect each space, and the two have traveled to furniture markets together on several occasions to make their selections.

An earlier renovation of the great room is proof of their collaborative working relationship. Husband Bill had never been happy with the original fireplace, and Tartaruga Design, Inc., was brought in to recreate this prominent focal point. Fabricated in cast stone, the fireplace now showcases an elegant custom Bourges mantel and overmantel, topped by an antique French Trumeau mirror that established the room’s color scheme.

The flooring was replaced with hand-oiled solid walnut, installed in a herringbone pattern. A custom Farrow & Ball French sage hue was chosen for the walls and a creamy white for the woodwork. It’s worth noting that there are no white ceilings anywhere in the home. Instead, the ceilings are all a lighter version of the wall color.

Nearly all of the great room furnishings were newly acquired, including the custom wool-and-silk Tabriz area rug from Pakistan; and to make the space feel more welcoming, the lofty architectural windows were lined with silk linen-weave drapes by Custom Creations.

Refurbished last summer, the objective in the formal dining room was to make it feel somewhat less formal. “We want the entire family at the table, no matter what the age,” says Diane, mentioning that 19 guests gathered for dinner this past Thanksgiving. The owners’ existing dining table was child-proofed with a high-resilience finish by Custom Furniture Works; the chairs were reupholstered in a sophisticated interior performance fabric; and new artwork and an Asian-inspired side table in distressed French blue lend a genteel touch to this well-used space.

Antique stone flooring blankets the open hearth room, casual dining area and kitchen, which is defined by an expansive U-shaped island. Equipped with built-in, high-end appliances, the kitchen’s granite countertops and chestnut cabinetry are original, but the hardware was changed to nickel for a more updated look, and new Minton-Spidell bar stools were tucked under the island’s overhang.

Among the significant alterations made to this spacious activity area, the hearth room fireplace surround was converted from wood to stone, and the built-in wet bar and recipe desk were removed and replaced with antiques, including a Bausman custom English hutch in hickory.

A dignified “gentleman’s study,” the husband’s office retains its original cherry paneling, but was revitalized with new furnishings. An antique French writing desk with ormolu fittings serves as his desk.  Tufted leather Baker chairs provide comfortable seating, and fixtures from Hart Lighting and a table lamp from Brody’s light the space. Adding visual interest and color are scenic oil paintings from Bailot Imports and framed architectural prints of St. Louis.

The main-floor master suite was the most recent to be transformed. A light blue/gray palette was selected, with new carpeting installed, window treatments added and a new bedding ensemble sourced from Design & Detail's showroom. This tranquil haven also displays two of Betty’s signature elements. “I like to mix antiques,” she says, indicating the bureau and the chest at the foot of the bed, which are painted and distressed in complementary hues. “Layered detailing” is another of the designer’s hallmarks, and she looks for unique pieces of antique artwork that can be custom-framed, such as the Italian intaglios arranged above the wrought-iron headboard.

A special favorite of both designer and owner, the private hall leading to the master bath features Diane’s personal beverage bar and vanity area, custom-designed by Bob Burmeister at Marc Christian Fine Cabinetry.  Exquisitely appointed, the master bath itself was a Marc Christian/Interior Visions design and a 2018 St. Louis Homes + Lifestyles Platinum award winner. Adjacent to the master bedroom, Diane's office was made more feminine with the addition of a hand-inked, four-piece street map of Paris, two Baker wing chairs and a crackle-distressed display cabinet for her personal memorabilia. “Design is as much about creating a feeling as it is about enhancing function,” Betty concludes.  “Buying the things we love is only the beginning of the story. Using them well completes it.” And with 8,500 square feet on the three levels of this fine residence, there will be plenty of opportunities for the homeowners and their designer to continue applying that philosophy for years to come.