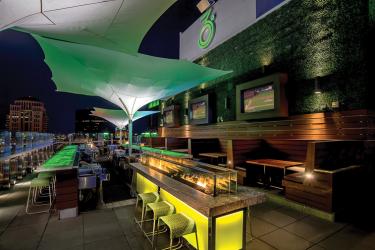 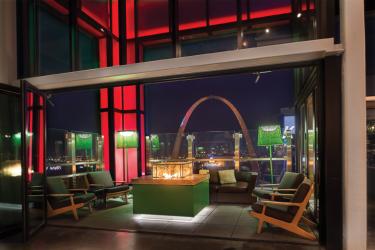 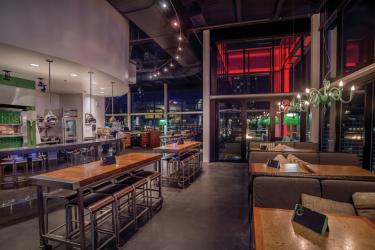 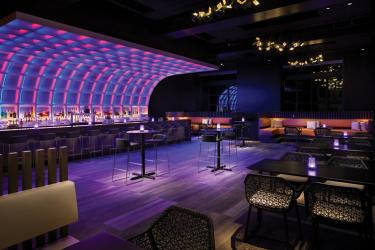 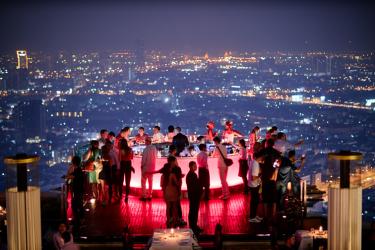 As the closest hotel to the White House, W Washington DC wished to provide both locals and visitors with a taste of splendor. Located on the 100-year-old rooftop of the hotel is POV, a bar that features views of the National Monument and the National Mall. To make the bar’s terrace comfortable in all weather, floor-to-ceiling retractable glass windows were added so as not to distract from the view. To match the bar’s metropolitan design, they hired Gaia, a Baltimore-based street artist to create a large-scale mural that welcomes customers onto the terrace from the elevators. If you’re less worried about the view and more worried about the food and drink options, POV won’t disappoint. POV’s cocktail program is under the care of Amsterdam-based Cocktail Professor, a group known for their inventive and delicious cocktails across the world. Take a seat in the main serving area or snuggle down into your booth for a VIP bottle service.

Have you ever enjoyed a cocktail at 820 feet above a booming city? If not, Sky Bar at The Dome at lebua in Bangkok, Thailand may have the excitement you’re looking for. Sky Bar is known for being one of the highest rooftop bars in the world; the bar itself is suspended on a precipice on the 63rd floor. Lebua Hotels; Resorts calls their Bangkok location “the world’s first vertical destination,” and Sky Bar fits in perfectly as one of its 11 famous restaurants. In fact, Sky Bar at The Dome is largely credited for beginning the rooftop bar boom in Asia, though it reached its height of fame after scenes from The Hangover Part 2 were filmed there. Soak in the views of Bangkok and the Chao Phraya River at sunset while sipping on an innovative cocktail at Sky Bar.

The highlight at any rooftop bar should be its view, and Three Sixty, a bar located atop the Hilton St. Louis at the Ballpark, is no different. As its name implies, Three Sixty offers an unencumbered view of the St. Louis skyline including a bird’s eye view into Busch Stadium. Not a baseball fan? The Gateway Arch, Mississippi River and many other St. Louis entertainment staples will be in plain sight. While sipping your cocktail at 400 feet above downtown, you can enjoy all 6,000 square feet of indoor and outdoor seating that the bar has to offer from fire pits to flatscreen televisions. The space’s sleek and contemporary styling fits in perfectly with St. Louis’s urban feel. In 2011, Frommer’s Travel Guides listed Three Sixty as one of “The 10 Best New Hotel Rooftop Bars in the World.” Whether you’re going for the top-of-the-line bar food, a fresh cocktail or just to enjoy the view, Three Sixty is sure to wow.