Photography by Photographie by Li 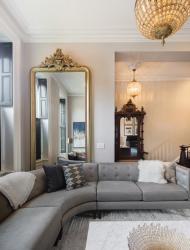 Cool grays, stunning golds and powerful blacks give this room the contrast it needs to shine. 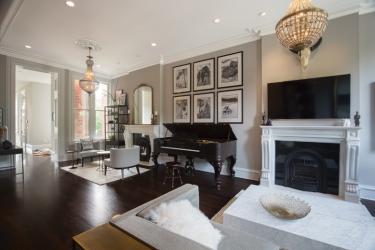 After two-and-a-half years of waiting,  the homeowners finally received their rehabilitated piano that plays itself. 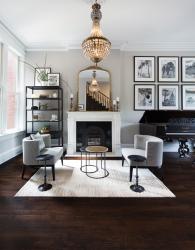 The homeowners chose statement chandeliers from Restoration Hardware that not only fit their style, but also the time period and dimensions of the home. 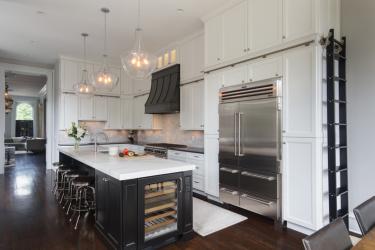 Custom floor-to-ceiling cabinets by Marc Christian Fine Cabinetry give the homeowners the space they crave. 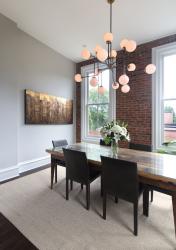 Jermaine Todd of Mwanzi Studios handcrafted this table for the homeowners by repurposing the home's old floor joists and studs. 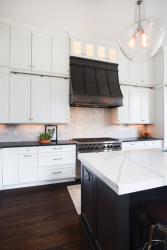 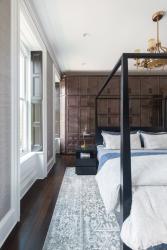 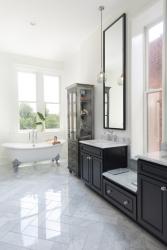 With Carerra marble dominating this striking bathroom, the homeowners can always enjoy their bath time in luxury. 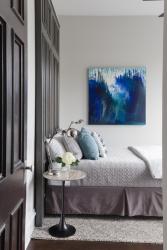 A personal painting done by the homeowner strikes a pose next to the custom headboard made of old parlor pocket doors. 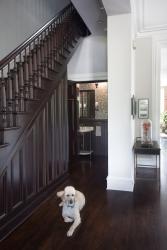 Emerson the dog lounges next to the home's original staircase.

We used to play this game every time we walked past the house,” says homeowner Ryan Jacob Wood. “We’d ask each other, ‘What would we do if it was ours?’” Living in a condo only seven doors down at the time, Wood and partner Bary Klevene had to ask the question often on their daily strolls past Lafayette Square Park.

When a neighbor asked the pair if they’d be interested in buying the home, their game became a reality. “We knew we wanted a home in the area, and a fixer-upper worked best for our budget,” Ryan comments. “We wanted a house that was made specifically for us while staying true to its history.”

As soon as they entered the home for the first time, they knew it would take an army to make it livable. The previous owner used it as a workshop for woodworking and a storage space for St. Louis artifacts. Before they owned the home, the homeowners were let in to take measurements and begin drawing up their floor plans.

Originally built in 1878, the home endured more than average wear and tear; there was a fire in the front of the house that destroyed much of the original crown molding, and various leaks caused rotting in both the south and east-facing exterior walls. These walls were removed and rebuilt from the foundation up to make the home’s exterior load-bearing walls safe for homeowners and builders alike.

Once the exterior walls were repaired and the previous homeowner’s possessions relocated, Ryan and Bary began making the home their own; there were two small parlors that dominated what is now the living room. “We wanted to make the house livable in modern times,” Ryan says. “The parlors were too small and stuffy, so we took out the wall between the parlors and the wall that made up the hallway.”

After removing the parlors, they focused on bringing the front room up to historical par, hiring on professionals to remake the crown molding to match the style of their neighbor’s home. The light gray paint on the walls paired with stately chandeliers from Restoration Hardware give the room a livable feel of late 19th-century high society.

Bary and Ryan decided to decorate with only personal artwork, whether it be photos from the over 50 countries they’ve visited, gorgeous acrylic paintings by Ryan or small metal sculptures crafted by Bary. “I’m a big advocate of knowing that we can create artwork ourselves. I don’t want to put something on my wall just to have something there. I want to have something meaningful.”

While the artwork is stunning, the highlight of the room is a square grand piano built in 1875. Ryan came upon the piano when cleaning out a family member’s garage. Though the statement piece seemed in disrepair, he sent it to a historic piano restoration company. After two and a half years, the piano came back in its intended splendor; everything about it was original except for the interior strings and hammers, and Ryan had it made into a player piano.

At the back of the living room is a small powder room that packs a designer punch. Using an old-school smoking lounge for inspiration, the homeowners strove for a dark and moody vibe. Ryan describes the wallpaper as “deceptively metallic,” as the tossing ocean pattern glimmers slightly in the light cast by a pendant light bought in Dubai. The black ceiling makes its 12-foot height seem endless, and the wainscotting gives a nod to the original dining room’s design. Because the floor space was so small, they opted for a Carerra marble corner sink with double mirrors to free-up space.

The living room’s color scheme of white, black and gold flows seamlessly into the new kitchen and dining space. Natural light floods in through the windows, illuminating the 12-foot floor to ceiling cabinets, made by Marc Christian Fine Cabinetry, complete with sliding ladder. The 13-foot Silestone island houses the main kitchen sink, and black bar stools from Restoration Hardware surround it. The Belgium Bluestone counter top boasts a beverage and prep sink as well as an 8-burner Sub-Zero Wolf gas stove with double ovens. A marble backsplash finishes off the kitchen with a final touch of texture.

The dining room overlooks the homeowners’ beautiful back yard. A statement chandelier from Restoration Hardware hangs above a handcrafted table by Jermaine Todd from  Mwanzi Co. The homeowners had the table made from floor joists and stud wall beams that they’d removed from the house during renovation.

Just inside the entryway is the remaining original staircase, which Ryan stripped himself along with all of the doors inside the house. He chose a dark stain to complement the stained white oak flooring. At the top of the stairs, a curved wall in the hallway stands as the only piece of original plaster left in the house.

The master bedroom holds another of the home’s original fireplaces made of marble, redone by Stone Fabricators to fix any flaws in the stone. They also added a newly cut hearth stone made from black granite to add contrast against the white Carerra marble. The home’s original shutters help moderate the temperature in this street-facing room. They had their floor to ceiling closet custom made by Modern Kitchens & Baths to allow for more storage space in the bedroom, painted in a muted gray to match the blue and gray bed coverings from Crate & Barrel.

Off the master bedroom is an exquisite marble master bath; the floors, shower tile and vanity tops are all made of Carerra marble. Between the vanities, there is a seat to allow the long vertical window to remain in its original location. This full-size window draws attention to the symmetry of the room with tall vanity mirrors on either side. The walk-in shower sports three shower heads to bring it to the height of luxury. Next to the cast iron tub is Ryan’s soap cabinet. He runs his own soap company, called Woodberry Co., and he keeps a sample of each soap in the cabinet to use it as a reference point for later batches.

The laundry room to the left of the master bath acts as a second entrance into the hallway where the “kids’ rooms” are located. These rooms, while cozier than the master bedroom, hold the same attention to design and personalization as all other rooms in the home. One bedroom has a custom made headboard fabricated from the old pocket doors originally located in the parlors. In this same room, another one of Ryan’s paintings sets the color scheme.

With paintings, photos and personal touches galore, this home has a foot planted firmly in the past and the present. By staying true to the area's historical integrity, the remodel gave back the home’s stately ambiance while providing the homeowners a space that reflects their goals and experiences.