There’s nothing wrong with a tried-and-true Aspen ski trip — hello, Moncler puffer vest and Après — but it’s a shame how many tourists skip over Colorado’s capital city. This year, for an unforgettable holiday getaway, make Denver the main event. 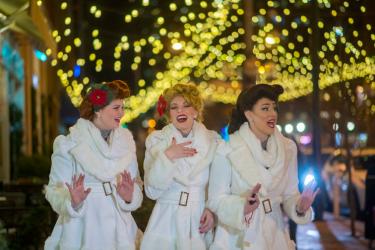 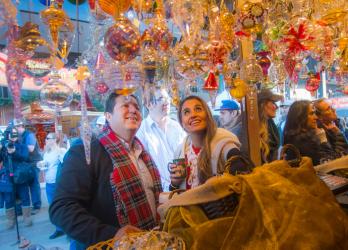 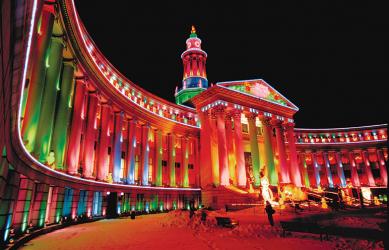 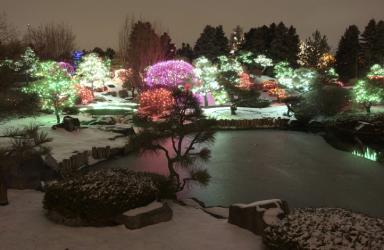 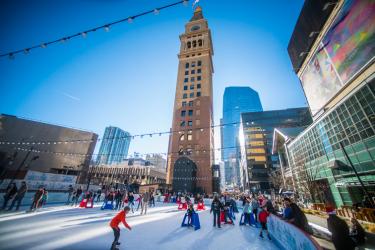 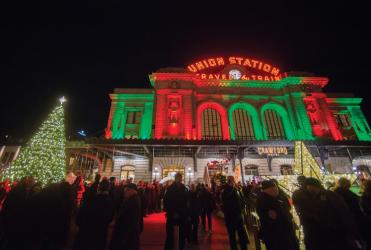 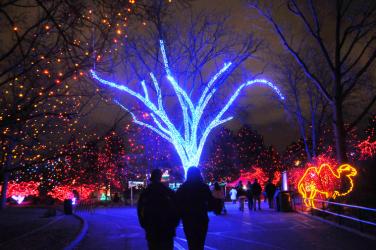 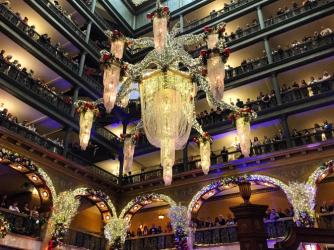 The first thing to do after touching down at DIA is steer your rental car toward Denver Union Station, a posh transit building anchored by its stunning Great Hall, which opens to Terminal Bar and several worthwhile restaurants and boutiques. Denver hurdles itself into holiday mode on November 29 with a ceremonious lighting of Union Station. Through the New Year, the streets of Lower Downtown and its surrounding districts will be totally decked out with lights, tinsel and seasonal art galore.

One of Denver’s most festive offerings, Miracle, is a pop-up cocktail bar with themed drinks and kitschy décor. Grab a drink, then cozy up by the fireplace at Tavernetta, the upscale Italian spot behind Union Station, before trekking six blocks southeast to Larimer Street. Turn right to reach Larimer Square. You’ll know you’ve hit Denver’s oldest, most historic block when you see the canopy of lights overhead. In early December, a group of local artists turn the windows along Larimer Square into festive masterpieces, and this “Yuletide Window Walk” is always a fun stroll.

If you’re traveling with children or grandchildren, Santa visits Larimer Square on select days, but I prefer seeing the Jolly Old Elf at Winterfest on Old South Pearl Street, December 6 and 7, with Box Elder horse and wagon rides, caroling and roasted chestnuts, as well as an open-air holiday market. Also on December 6 and 7, the annual 9News Parade of Lights, held at Civic Center Park, is a spectacular, albeit crowded, way to get in the spirit, with illuminated floats, giant helium-filled character balloons, marching bands and traditional equestrian units.

The weather can be shockingly mild in Denver in late December, so plan time to enjoy the outdoors. Red Rocks Park, one of Colorado’s most iconic sites, is my go-to for entertaining out-of-towners. The main attraction is an open-air amphitheater consisting of two 300-foot monoliths. But the 738-acre park is also a popular stop for hikers. The 1.4-mile Trading Post Trail Loop provides great views of Colorado’s rugged beauty, plus some of the area’s most unique bird watching.

You could also try snowshoeing at the Eldora Nordic Center, located at Eldora Mountain Resort, with a warming hut, gear rentals and miles of peaceful, scenic trail. Eldora is a stone’s throw from the charming college town of Boulder, where Pearl Street Mall is a premiere destination for seasonal shopping and dining.

Back in the Mile High City, idle away an afternoon at Denver Christkindl Market, a German-themed exchange set up downtown, on the 16th Street Mall, November 22 through December 23. For upscale shopping, and additional merriment, wander around the Cherry Creek North neighborhood, too.

Denver’s art scene is legendary, and the River North Arts District — RiNo for short — is where you’ll find dozens of galleries and a handful of creative collectives best explored, if possible, on November 1 or December 6, when artists open their doors to the public during the First Friday Art Walk. Through February 2, the Denver Art Museum houses the most comprehensive U.S. exhibition of Monet paintings in two decades, featuring more than 120 paintings.

For performing arts, try the Colorado Symphony, offering “A Colorado Christmas,” “Holiday Brass,” and “A Night in Vienna,” the latter of which is a perfect sendoff into 2020. Located in Denver’s Theatre District, Denver Center for the Performing Arts also presents a handful of holiday plays and musicals, but if you’re getting burned out on Christmas, you could set your clock to island time instead with “Jimmy Buffet’s Escape to Margaritaville,” playing at the Buell Theater December 23 to January 5.

From the Ritz-Carlton Denver to the JW Marriott, Denver has plenty of luxury accommodations. Over the holidays, I recommend the Brown Palace Hotel and Spa, with its champagne cascade, afternoon tea and caroling. The Oxford Hotel also goes all-out for Christmas, and Hotel Born, Denver’s newest Kimpton property, is a solid lodging option, along with Halcyon Cherry Creek and the ART, an award-winning property in Denver’s Golden Triangle neighborhood.

You came all the way to Colorado, so you really should take a day trip to Colorado Springs for the Broadmoor, which puts on an elaborate holiday dinner show akin to what you’d get at Radio City Music Hall. Grammy Award winner Debbie Boone headlines at this year’s event, and seasonal songs sound especially good alongside a holiday feast from the Broadmoor’s top-rated chefs.

Buy standalone tickets to The Classic Broadmoor Holiday show, or consider staying overnight, so you’ll have time to check out Penrose Room, Colorado’s only five-star restaurant, as well as the hotel’s massive gingerbread display. Don’t leave without grabbing a batch of Old Fashioned Hot Cocoa mix at Café Julie’s. If the weather cooperates, you might even squeeze in a round at the Broadmoor Golf Club.

Twenty-five minutes west of LoDo, historic downtown Golden offers a completely different kind of day trip. The former gold rush town goes all out for the holidays with a very special Candlelight Walk Parade and fireworks over Lookout Mountain (December 6), weekly Olde Golden Christmas Parades (December 7, 14, and 21), plus miles of twinkling lights strung along the banks of Clear Creek. Weekend afternoons in December, a horse-drawn carriage ride is the perfect prelude to dinner at Abejas or the new Tributary Food Hall & Drinkery. You can also see how the Coors Brewery Tour stacks up against the Budweiser experience.

Less than a century ago — in the 1930s – downtown Denver was the best place to hear live jazz between St. Louis and San Francisco. Hands down, my favorite way to end a night in Colorado is back in LoDo, celebrating the city’s jazz history with fresh beats and craft cocktails at Dazzle or Nocturne Jazz and Supper Club.

You’ve got plenty of options while rolling through town, but two things are mandatory: Water and sunscreen. Denver is 5,280 feet above sea level, and the sun shines over 300 days a year. Hydrate to avoid altitude sickness, and slather on the SPF.