A homeowner, designer and trusted contractor create a “luxury farmhouse” bathroom to welcome in a new phase of airy and carefree living. 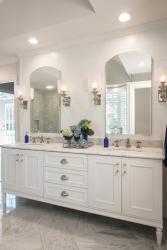 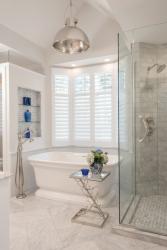 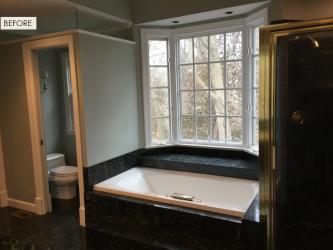 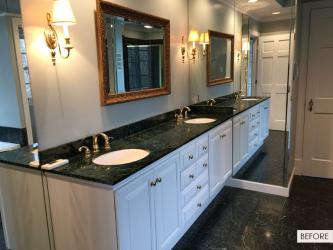 A job wasn’t the only thing the homeowner planned to leave behind post-retirement. “Since I’d been in St. Louis, I’d only lived in brick colonials. I wanted something cozy and cottage-y — more appropriately scaled for my living situation.” The homeowner was soon saying “goodbye” to stodgy Tudors and sprawling suburban fortresses and “hello” to a converted Ladue stable and the promise of a fresh start.

But she and her interior designer, Nancy Barrett of Beautiful Rooms, agreed: this new chapter came with an unexpected blast from times past. The bathroom was desperately in need of a new beginning of its own.

“I think it was late seventies, maybe early eighties,” the homeowner says of the dark space, which was meticulously fashioned with “hunter green marble and a platform tub,” according to Barrett. “The footprint was good. The water closet was already separated,” the designer explains. But it was a long way away from “Luxury Farmhouse,” the jaw-dropping, serenity inducing after-effect of a few months of teamwork and some serious help from co-designer Kathy Cissell and Rudar Construction.

“Whenever Nancy brings something to us,” laughs Greg Rudar Jr., “my son and I look at each other and say, ‘What are we into now?’” He and his wife, Vicky, have worked with Barrett for 15 years, running their family-owned enterprise by bringing incredible designs like this one to life. “This was one of those projects where Nancy did her homework so well that everything fell into place.”

“We went for a common color scheme throughout the house. Grays and blues with nice touches of cobalt in the bathroom, which really pop,” says Barrett. To add texture and interest to this consistent palette, Barrett incorporated a variety of tiled patterns and complementary materials into the design. Polished nickel hardware looks sharp and streamlined against Carrera marble in elongated and subway patterns on the vanity and shower walls. A tight basket-weave pattern on the shower floor, which took nearly six days for Rudar to install, plays nicely with a herringbone layout running the entire length of the room.

Marble’s price and cold-to-the-touch nature can give homeowners “cold feet” prior to installation, in spite of it being the gold standard for damp spaces like bathrooms. But Barrett, ever the thorough planner, ensured the homeowner would never have a second thought about her farmhouse bath.

No creature comforts spared, the team also added accessible outlets and a television monitor, a traditional showerhead and a hand-held to account for alternating preferences and easy cleaning. A private, attached sitting room gives the homeowner a place to rest and prepare for whatever the day may bring. “It is my peaceful oasis where I can shut out the world,” the homeowner sighs. “I thought it had charming roots, but Nancy made it a cohesive living space.”

Barrett didn’t plant the serene wooded glade outside the bathroom’s bay window, and Rudar didn’t lay the stonework to support the stable. But together, they provided the professional eye and flourish central to the homeowner’s luxury farmhouse and new stage in life. “It has everything a bathroom would want,” Barrett says. “The best part, though, is that it makes the homeowner happy.”