It Must've Been Kismet

The twists and turns of this custom home-building story almost defy credibility! 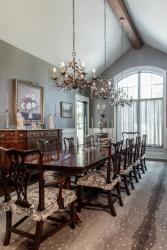 Furnished with family heirlooms, the beamed formal dining room showcases a mahogany table, buffet and sideboard. The owner fabricated toile slipcovers for the 200-year-old Chippendale chairs and added a touch of nature with a vine-like chandelier and a canvas of peonies painted by a grandfather. 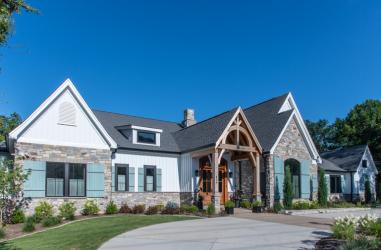 Blending rough-sawn cedar with tumbled stone, board-&-batten shutters in a pale blue patina and a complex roofline, architect Jeff Day describes the residence as a “modern farmhouse with a French Country look.” The steel siding-board and batten profile is a Quality Edge building product. 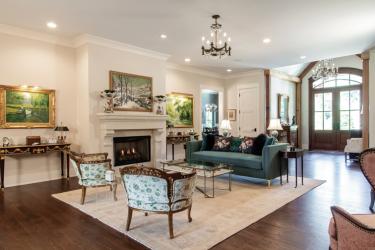 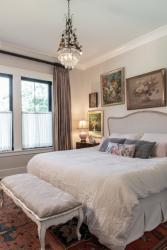 Vintage florals surround a linen-upholstered headboard in the guest bedroom, which is lit by an antique French chandelier. 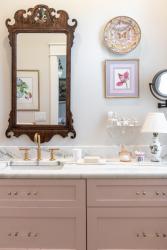 One of six in the home, this full bath is done in delicate shades of pink, with an antique mirror and unlacquered brass fixtures. 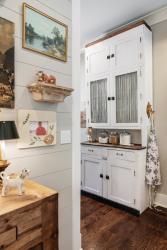 Shiplap adds character to the kitchen walls, and an antique-style European cabinet with chicken wire glass doors serves as a convenient baking station. 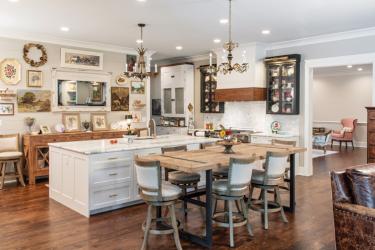 Dominated by a marble-topped island, wood-aproned range hood and black wall cabinets, the kitchen is adjoined by a casual dining area with rustic farmhouse table and nailhead-trimmed swivel chairs. 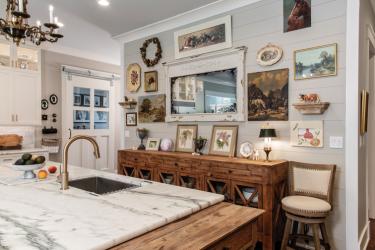 A china cabinet in reclaimed pine, Park Hill mirror and an array of artwork and mementos emphasize the kitchen’s old-world country aesthetic. 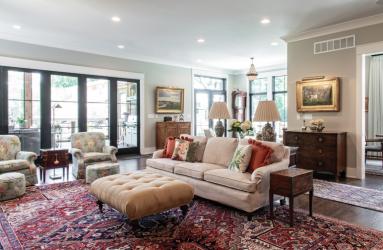 The hub of Day’s open-concept plan, the family room has 15-foot accordion doors accessing the screened porch, well-cushioned seating arranged on an antique oriental rug and a bow-fronted mahogany chest from the George III period. 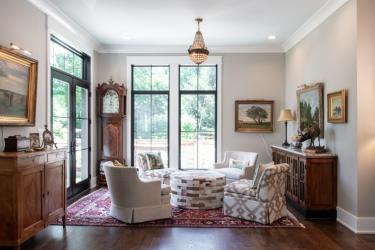 Off the family room, the conversation/sun nook is furnished with favorite pieces from the owners’ previous home, including a cowhide ottoman, plush chairs, a glass-fronted library chest and an English grandfather clock. 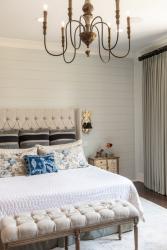 Longtime Kirkwood residents Mike and Susan weren’t in the market for a new home. The couple was perfectly content with the spacious home they’d owned for 25 years, filling it with antiques, family heirlooms and cherished memorabilia. That is, they were “content” until…

Driving home one day, Susan took a slightly different route, and a “Coming Soon” sign caught her eye. The picturesque 1.5-acre property included an Adirondack-styled ranch home and a 100-year-old barn that had potential as the headquarters for her thriving business, Knollwood Lane, where she and her partners hand-craft vintage-inspired gifts and décor.

Susan wasted no time bringing her husband back to view the property, which they purchased in March, 2016. Then Mike began having second thoughts about their investment. More than a half-century old, the house had been expanded and updated, but was less than half the size of their current home.  It would need considerable work, and the barn was another story entirely. But Susan had a vision, so she made overtures to three well-known local architects in hopes of assuaging her husband’s concerns.

Jeff Day & Associates Architecture was the first to respond, and Jeff Day himself arrived for a Saturday meeting with the couple. Although typical of Day’s attentive client service, what makes this so remarkable is that his firm can have as many as 50 projects underway at any given time.

Plans for a gut rehab of the ranch soon began, and Day found Susan to be a kindred creative spirit, saying, “She operates like an interior designer and wants to collaborate.” The owners’ objective was an open-concept layout, more suitable for their empty-nester lifestyle and large family gatherings, but with distinct privacy areas for houseguests. As Day produced various floorplans, Susan would attempt to fit scale images of their treasured belongings into the spaces. Eventually, however, renovation of the existing structure proved impractical, and the decision was made to “scrape the lot” and start over.

Freed from the constraints of renovation, Day was able to incorporate all of the owners’ desired elements, including a rustic vaulted entry, lower-level walk-out, full finished basement with three guest suites, separate office space for Mike and a large side-entry garage. Responding to the architectural styling that had first captured Susan’s imagination, he designed a “modern farmhouse with a French Country look,” featuring rough-sawn cedar, tumbled stone, board-and-batten shutters, and a complex, three-dimensional roofline that adds visual interest to the elevation.

Construction began in May of 2017, with Kirkwood-based Lewis Homes as the builder and Day specifying the architectural components. Since his firm emphasizes sustainable design, these included fully recyclable steel siding, a 98-percent-efficient HVAC system, high-performance windows, LED and can lighting and flash and batt insulation, a hybrid technique that combines fiberglass and closed-cell spray foam to minimize air infiltration and optimize the R-value. He also designed each of the rooms to allow the filling of natural light at the appropriate time of day.

Various materials salvaged from the original property were also repurposed. For example, reclaimed timber beams were used for the new screened porch, and the former barn door was installed on the lower level. Susan participated in virtually every exterior/interior selection and personally designed the blend of the front masonry, choosing tumbled stone in cedar and gray hues with a rubble finish.  “Her involvement made the process seamless and more fun,” Day remarks.

Inside, site-finished, wide-plank red oak flooring unifies the main-floor spaces. Counter surfaces are Danby marble throughout, and the 10-foot ceilings are painted a pale blue that seems to change hue subtly depending on the wall colors, which are predominately a soft gray/beige.  Another of the owner’s clever décor treatments, the custom millwork and window frames are all a crisp white, but the sashes are black, drawing attention to the beautiful views and prompting her to note, “There needs to be some black in every room.”

As construction progressed, Day’s working relationship with his clients was taking some intriguing turns, as well. In Susan’s words, “What began as a quest to turn a Kirkwood property into our dream home developed into a fast friendship with all kinds of crazy connections.”

Over time, the trio had discovered numerous people and places they had in common, including the Dallas area where the owners’ eldest son was soon to be married. He and his fiancée were looking for a minister for the wedding, and Day happened to know one. Unfortunately, the minister had a last-minute schedule conflict, but Day stepped up to the plate again. An ordained minister, the architect was eligible to perform marriages, so he flew to Texas and officiated at the ceremony!

Back in Kirkwood, the new residence was ready for move-in by June of 2018. Although configured very differently from the owners’ previous home, each space had been meticulously designed to accommodate their existing furnishings. The vaulted formal dining room, for instance, easily holds their antique mahogany buffet and sideboard, the vast mahogany table inherited from grandparents, and 200-year-old Chippendale-style dining chairs that had belonged to Mike’s father. For a more casual “farmhouse” look, Susan chose silvery-gray grasscloth for the walls and fabricated slipcovers for the chairs in a country house toile print.

Off the foyer, the living room showcases a cast-stone fireplace (the firebox outlined in black), vintage French provincial accent chairs and a unique bi-level coffee table in glass, marble and brass from The White Rabbit that displays a collection of antique napkin rings and baby teething rattles. Like most of the home’s antique rugs, the woven wool oriental had also come from Susan’s dad.

The heart of the home, though, is unquestionably the expansive family room/kitchen/breakfast room/casual dining area and adjacent conversation/sun nook. Fifteen-foot accordion doors access the screened porch from the family room, and a 10-foot marble-topped island defines the kitchen. Epitomizing the blend of modern farmhouse and French country styling, the kitchen has shiplap walls arrayed with artwork, a wood-aproned range hood, and black wall cabinets, customized with museum lights, black glass font cabinets lined with black and floral wallpaper, and displaying heirloom china pieces.

While this stunning 8,500-square-foot residence is clear proof of Jeff Day’s professional skill and ability to interpret his clients’ objectives, the best testimonial comes from Susan. Reflecting on the overall experience and their enduring friendship, she quipped, “Jeff designed such a perfect home for us that we may not need his architectural expertise again. However, we still have two children yet to be married!”