Echoing the bright hues of their adjoining living room, a young couple’s office space transforms into a whimsical temporary nursey for their first child. 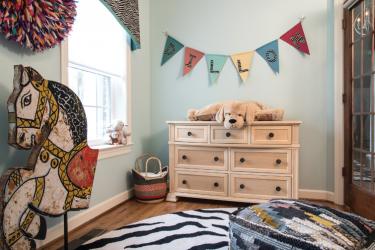 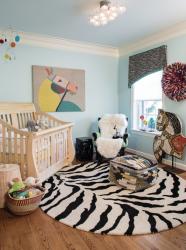 Converting an office into a nursery—and then eventually back to an office without a total redesign—was the key challenge for this St. Louis couple expecting their second baby. After deciding they needed professional guidance, they called on interior designer Marcia Moore, owner and principal designer at Marcia Moore Design, to help them create a smooth and stress-free remodel.

“These clients chose me to work with them when they originally moved into this home,” says Marcia. “We had already renovated the main living areas as well as the master bedroom and bath, so when they got pregnant, they called me back to create the nursery. Their style is transitional, not too serious and family friendly,” she adds.

Situated right next to the front door and open to the living room, the office was the only space close enough to the master bedroom that would work for a nursery. But once the baby was out of the crib, he would move to another bedroom in the house. The couple’s primary goal was to create a space that functioned as a nursery but didn’t look too nursery-like and that could easily revert to an office the following year.

“The color scheme was dictated by the adjacent living room, which was blue, gold, yellow and gray,” says the designer. “Our first purchase was the painted horse figure, which gave us our color palette. After that, we were able to add lots of other whimsical items to make the nursery bright and cheery,” she notes.

Being near the front door and next to the living room posed the greatest challenges for the team. But because the space would eventually need to revert to an office meant that Marcia and her clients had to carefully consider each design element and ask themselves, “Can we keep this in an office?” The bold artwork, tailored window treatments and graphic zebra-striped area rug were all chosen with this question in mind.

“Add a funky desk and interesting chair, and these nursery pieces would then work for an adult office space,” says Marcia. “It was really fun designing the custom-made name flag that created the perfect focal point for this room. I don’t often get to work on nurseries, so this project was especially enjoyable for me. This is a space where you can have a lot of fun and go a little over the top—which we did,” she laughs.