A major renovation breathes new life into a Kirkwood landmark while preserving its historic integrity. 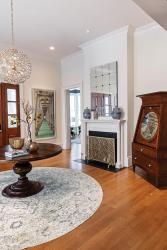 To relocate the main entrance from the south to the west side of the home, the original study was removed and transformed into an imposing entry foyer.  Although no longer functional, the study’s fireplace was preserved as a decorative element. 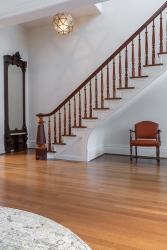 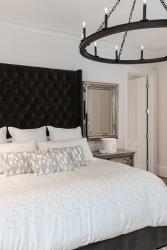 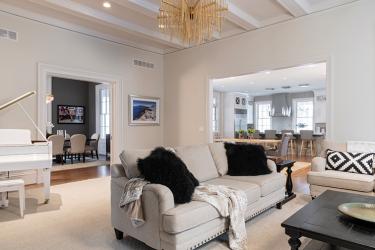 The main floor’s original footprint was retained, and no changes were made to the dimensions of the family and dining rooms. Major structural issues had to be addressed, however, when creating the large cased opening to the fully renovated kitchen and casual dining area. 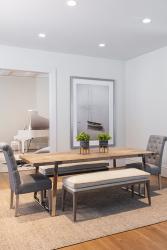 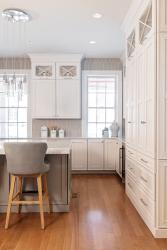 Comfortably furnished with previously owned pieces, the family room’s original 12-foot ceiling was preserved. For a more contemporary look, the owner added the dramatic lighting fixtures displayed throughout the home. Rich-hued walls and stylish transitional furnishings give the formal dining room its gracious ambience. Adding dimension and natural light to the space, the bay window (visible on the opposite page) is original to the home. 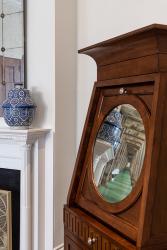 Fresh and feminine, the daughter’s bedroom is one of the original four on the second floor. Adjacent to the dining room, the family room showcases a graceful chaise set on a hide area rug, symbolizing the transitional décor that bridges the gap between the home’s historic origins and the family’s modern lifestyle. Architect Lauren Strutman carefully chose materials and design elements to establish a cohesive effect while conforming to the City of Kirkwood's regulations.

To the medical community, this Kirkwood homeowner is known as Dr. Matt Bruckel, founder, CEO and president of TAUC® (Total Access Urgent Care), the fastest-growing healthcare organization in the region. To his neighbors, Matt is the congenial father of two who purchased and renovated the city’s historic “Spencer Smith house.”

In fact, Dr. Bruckel has a penchant for historic homes, and this is the third residence in the metro area that he’s renovated in recent years. But let’s go back to the beginning…

This particular home is reputed to have been built in 1853 for Spencer Smith, one of Kirkwood’s earliest residents and the owner of a large tract of land he intended to subdivide.  The house itself was expanded around 1870, has had a series of subsequent owners, and is now designated a Kirkwood Historical Landmark. With its cross gables, overhanging eaves and brackets, veranda and other decorative elements, the two-story is usually described as Italianate in design. It was, however, less ornate than many Italianate homes of its era, perhaps since this architectural influence was fairly new to St. Louis at the time.

Attracted by the property’s close-in location, memorable past and neighborhood setting, Bruckel acquired the 165-year-old home in early 2018 and began making plans. Based on her skill and expertise, he selected well-known local architect Lauren Strutman, a member of the St. Louis County Historic Buildings Commission.

Beyond updating the home’s systems, the owner’s primary objectives were to design a more open, functional layout for the main level; remodel the 4-bedroom upper story; add a main-floor master suite, attached garage and recreation area for his children; and, topping the list, create a wrap-around porch that would invite neighborly interaction.

Because of the home’s landmark classification, the improvements were planned in two stages. The initial permit allowed for any necessary structural repairs—a daunting task in itself!—and for rearrangement of the interior spaces.

First on the agenda was replacement of the floor joists on the first floor. The stone foundation walls had rotated outwards, so that the original floor joists were no longer supported on the foundation.  When the original plaster and lath walls were removed, structural support issues also had to be addressed to create the new, large cased openings. In addition, the former radiator heating was converted to forced air HVAC, and the mechanical, plumbing and electrical systems were all updated.

Over time, Kirkwood’s street pattern had changed considerably, and one of the first alterations called for by Strutman’s new design was repositioning of the main entry from the home’s south side to the west. To achieve this, the original study was removed, creating an entry foyer and making access to the house more convenient.

Although the first floor retained its original footprint, major changes made during this phase included fabrication of a large cased opening from the foyer to the main staircase, opening the kitchen to the living areas with another large cased opening, removal of a rear stairway to the second floor and installation of rift and quarter-sawn white oak flooring, five inches in width, throughout the main level. Due to the home’s age, numerous other structural challenges were encountered, as well. For example, seven layers of hardwood had to be removed from the kitchen floor, and interior access to the basement had to be provided, since floor plan changes for the new addition eliminated the original basement stairs.

Carefully preserved throughout the process were the 12-foot ceilings in the living and dining rooms, the free-standing spiral main staircase and niches, the dining room’s bay window and the former study’s fireplace, which is now purely decorative.

On the upper level, the four bedrooms (one of which would serve temporarily as the master) and existing baths were gutted and remodeled, and another bath and upstairs laundry were added. The gracefully curved walls and pine flooring were preserved, and flexible moulding was used to reproduce the original crown millwork faithfully. For another touch of authenticity, a curved radiator was salvaged for use as a decorative element in the hallway.

Remarkably, all of these renovations were completed within months, and the family moved in. Meanwhile, negotiations were underway with the City of Kirkwood for the project’s second phase, which involved the planned addition of a 3.5-bay attached garage, main-floor master suite, laundry room, powder room, second-floor recreation room with half-kitchen and a huge outdoor recreation deck with hot tub, gas fire pit, grill and wet bar.

The City’s historic homes are subject to stringent ordinances, and any exterior repairs to the original structure must replicate the architecture exactly. Additions, however, must be clearly identifiable as different from the original. Strutman had faced this challenge before and carefully chose materials and design elements that would establish a cohesive effect while conforming to the regulations. But the biggest hurdle yet to be overcome was obtaining a variance for the full wrap-around porch.

Ultimately, plans for the addition were approved, including the porch, which was designed with columns and a spindled railing consistent with the home’s original architecture. The existing detached garage was razed, and construction of the long-awaited second phase began, expanding the home’s total area to approximately 6,700 square feet.

In spite of his busy professional life, the owner was involved in every stage of the process. Going for a “contemporary but comfortable” look, he’d personally chosen all of the lighting fixtures and furnished the various spaces with a mixture of new and previously owned pieces.

Brilliantly designed and beautifully crafted, the newly renovated residence is everything the owner had hoped for—ideally suited to his family’s twenty-first century lifestyle while retaining its historic legacy. Asked if he had plans to acquire and renovate another home in the near future, Dr. Bruckel was quick to respond. “No!” he stated emphatically. “This one is big, but doesn’t feel too big. The smaller spaces create an ‘environment,’ and we even have a golf cart for quick trips to downtown Kirkwood. It’s the perfect house!”