Trying to define “modern” architecture can be confusing. 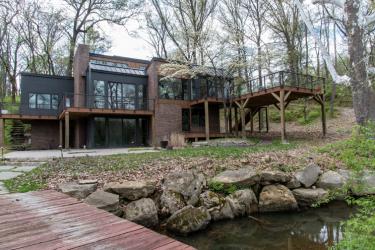 Modern. Mid-Century Modern. Postmodern. Contemporary. Unless you’re an architect, differentiating between these design styles may be rather perplexing. Put simply, the first three terms are specific architectural movements. While sharing many similar characteristics, they are clearly identifiable and have evolved sequentially over time. “Contemporary,” on the other hand, isn’t an actual historical movement. Instead, it’s a broad category for designs that break with conventional standards, giving architects the freedom to innovate and experiment with state-of-the-art materials, concepts and technologies.

Most pundits agree that the origin of Modern architecture can be traced back to Queen Victoria’s reign, with construction of the Crystal Palace in London. Built entirely of recently introduced plate-glass, slender cast-iron rods and wood, the modular structure astonished visitors to the Great Exposition of 1851.

Development of new industrial materials and engineering techniques progressed rapidly into the early 20th century, and architectural design underwent a dramatic transformation. Veering sharply away from the ornate, eclectic styling of the Victorian, Edwardian and Beaux-Arts eras, European and American architects began to lay the foundation for “modernism.”

Two fundamental principles adhered to by virtually all architects of the Modern movement were, “form follows function,” and “less is more.” Basic characteristics of residential design included a simple, clean aesthetic, emphasis on rectangular forms and horizontal lines, concrete, steel and glass as the predominant structural materials, flat or low, gently sloping roofs with broad overhangs, ribbon and oversize windows for natural light, and open, free-flowing floorplans with a minimum of interior walls and hallways.

Starting in the 1920s, minimalism became a distinct trend, with the objective of reducing architecture to its “essence.” This meant stripping a design down to its simplest form and volume and eliminating any elements that weren’t absolutely essential. Some Modern architects, however, defied the trend. Frank Lloyd Wright, for example, was considered a rebel, challenging minimalism with the idea that a structure should be more “organic,” blending with its natural surroundings. To achieve this effect, he included brick, wood and stone among the list of authentic exterior materials.

Although many of the strict early-Modern principles are still evident in today’s home designs, they focused primarily on form. With the housing boom following World War II, styling for the average American family renewed the emphasis on function and livability, setting the stage for the ensuing Mid-Century Modern and Postmodern movements.