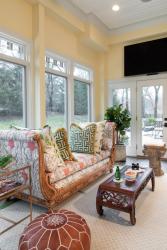 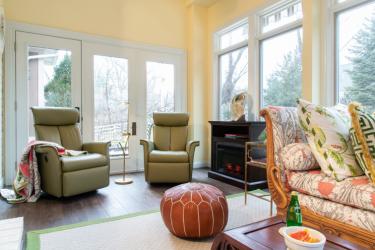 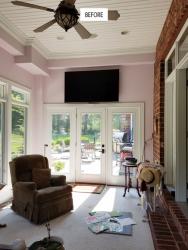 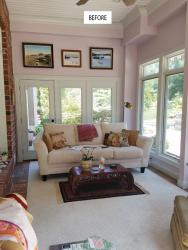 Drafty, cold and damp are not the words you want to use to describe a sunroom. But, unfortunately for a St. Louis couple, these were exactly the conditions they faced in their unused solarium. Originally an outdoor patio with an overhang roof built with the home in 2009, the couple had it glassed in shortly after moving in with the hopes to make it a more livable space adjoined to their living room. While the solarium had a great outdoor feel, it was built on top of garden pavers, so moisture seeped up from the pavers giving the room a damp feeling when it rained. Doors to the main house could be opened up to help with air conditioning, but it didn’t take the chill off. “Plus, the brick wall screamed ‘add on’ and not in a good way,” says the homeowner.

While in the midst of a remodel of several other spaces in the home, it was time to give the proper attention to making the solarium a place the couple could actually enjoy. Interior designer CJ Knapp, Yours by Design, met the couple when she was hired to design their study. They’ve continued to share a working relationship over the years and knew she could transform the space. With more than 25 years in the industry, Knapp’s philosophy is that “each space we design should reflect the client and function for the way they live.”

In addition to addressing the flooring issues, the homeowners wanted to be able to keep the view of the lap pool in the yard and needed a comfortable place to read with two recliners. Knapp’s first step in the remodel was to paint the walls a soft yellow to take advantage of the sunlight from the Northern exposure. The homeowner loves the color as it makes the room feel warm and lush, even in the winter with snow outside. “In the summer when we’re looking at the pool and fountains, the room feels like a verandah in the tropics,” the homeowner says.

Next, Knapp suggested painting the exterior red brick and step from the living room white “to blend them into the white French doors,” she says. The homeowner says once the brick wall was painted white, the room no longer felt like it was an afterthought to the rest of the house. To update the flooring, Knapp selected a vinyl floor product that looks like wood but could withstand the changes in temperature. An electric freestanding fireplace was also added to warm the room in the winter.

Knapp chose furniture and fabrics that would give the room the tropical, Floridian flare the homeowners requested. “We were in sync with the direction for the room from the first meeting. As I brought fabrics out, the layers started to come together,” Knapp says. “The homeowners have very well-made pieces of furniture they have collected over the years.”

The sofa originally in the solarium wasn’t working with the new design. Knapp suggested moving a signature piece that was in the living room to make it a feature in the new space. The daybed frame is hand-carved and was originally covered in a small blue-and-gray tweed fabric, which just didn’t work in the new room. Knapp, who began her career in draperies, always incorporates beautiful fabrics into her designs, so there was no question she’d recover the daybed with a more appropriate fabric option, an outlined, quilted print.

A hand-carved teak table that belonged to the wife’s grandmother and was brought back from Hawaii in the early 1920s is another special feature in the solarium. Two leather recliners are a cozy place to read while enjoying views of the serene landscape. After finishing the solarium, a few pieces in the living room needed to be replaced and a ceiling strip was added to pull the spaces together.

The homeowners are taking full advantage of their newly renovated and now usable space, especially in the summer. For the homeowner, the best part of the experience was “the joy of the transformation. Whenever I walk into one of the rooms, I literally get a lift.”

Interior design: Yours By Design