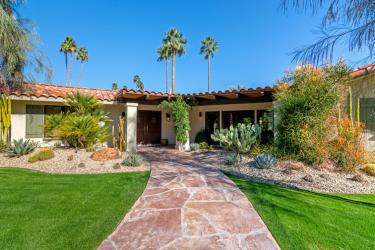 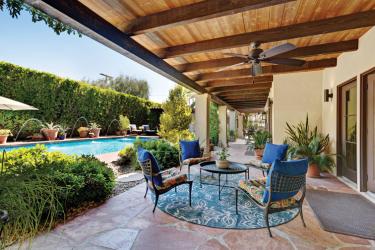 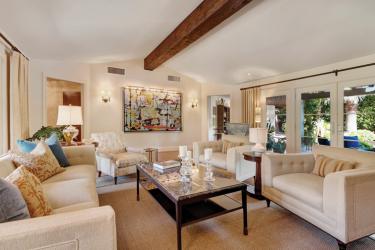 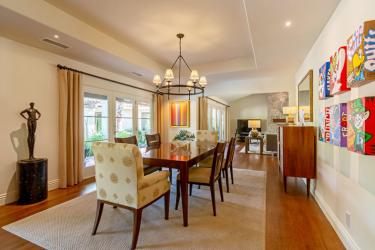 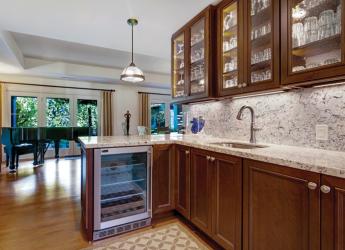 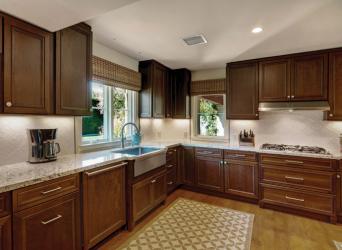 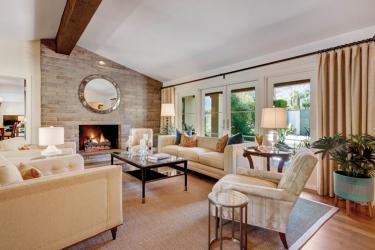 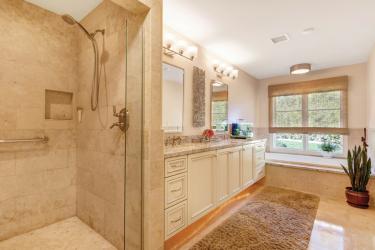 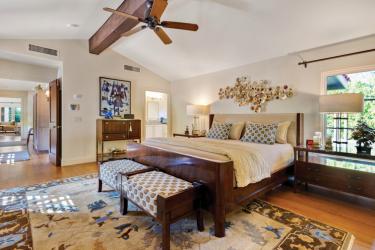 “This is a new house in an old shell,” says Steve Toedebusch, founder and owner of Toedebusch Design, who has been an interior designer both in St. Louis and Palm Springs for more than 30 years. “The house was built in 1951 and endured a lot of additions over the years. We wanted to bring it back to its former California Spanish ranch style, which was the original style of house,” he adds. “The homeowner—a client I worked with here and in St. Louis on his penthouse—was moving to Palm Springs full time and had a lot of creative input with specific tastes that were mostly modern and contemporary.”

Situated in the heart of Old Las Palmas, a legendary neighborhood known for its lavish movie-star residences—Leonardo DiCaprio lives around the corner—this exquisite home mixes well with the classic older homes in the area. Within walking distance of art galleries, designer boutiques and chic eateries, the historic locale is also backdropped by the scenic San Jacinto Mountains.

“I worked with an architectural engineer redrawing the new plans for the home,” says Steve. “The house was cut down to the studs, but we wanted to keep the original bones because we felt it would be more interesting. People in Palm Springs love lots of shade, so we designed breezy, open-air porches with steel columns we had plastered with stucco. The porch floors are paved with red limestone, as is the front walk. We also created a guest house 10 feet away from the main structure on the south side so visitors could enjoy complete privacy,” he adds.

The team also made the home highly energy efficient with state-of-the-art insulation that keeps the interiors cool even in the intense heat of summer. They also brought the structure back to modern earthquake standards with new footings and other earthquake-proofing technology throughout the entire home. Oak hardwood floors were added throughout befitting the home’s rustic contemporary style and three magnificent fireplaces—one in the family room and one in the master bedroom—create striking focal points. The original eight-foot flat ceilings were taken out and replaced with 15-foot vaulted ceilings in both the family room and living room.

“Some of the beams in the living room are hollow to hide the electrical wiring,” says Steve. “The beams are actually made of oak planks that are mitered together in the corners and stained a rich, dark brown. We also designed a beautiful tray ceiling for the dining room,” he adds.

For the interior palette, Steve decided on a neutral theme to complement the lush green hues of the landscape outside as well as the homeowner’s colorful rugs and vibrant modern artwork. An avid collector of contemporary works and pop art, his favorites include two Peter Max paintings—one in the entrance hall and one in the study—a Jeff Koons dog sculpture on the kitchen counter, various metal figure sculptures by Luis Efe Velez and the dining room’s striking pieces that resemble the graphic comic-book creations of Roy Lichtenstein.

“The homeowner also brought in some spectacular mid-century modern pieces that we mixed with contemporary Baker furniture,” says Steve. “I like to use window treatments to soften things up a bit, so we applied draperies everywhere and used woven shades to create texture and softness. The stained cherry kitchen cabinets were purchased in St. Louis and pair perfectly with the beige-brown granite countertops. All the bathrooms have granite countertops as well, along with elegant marble flooring. We used a lot of muted golden tones throughout to go with the scheme, which I call ‘sophisticated desert,’” he laughs.

When revamping the patio area, the team decided to leave the same shape of the original pool but added a sunning area on one side with umbrellas and a spa in the pool with fountain jets. A terracotta-colored stained concrete surface around the pool as well as an inviting lanai complement the home’s original Spanish style. The desert landscape includes several species of cactus at the homeowner’s request, and there is also a huge side yard for his dogs.

“I loved creating a seamless indoor-outdoor environment for this client, who is a casual entertainer and loves to be outside,” says Steve. “Also, one of my fondest memories of working on this project was partnering with the architectural engineer. We worked together for hours and got all the permits from the city, which is very strict. It was fun for me because I got to be the architect when there really wasn’t an architect,” he laughs.