A modern makeover breathes new life into an historic home in the scenic Shaw neighborhood with a bright white palette and accents of gold. 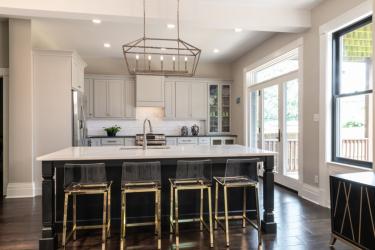 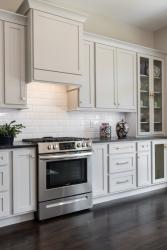 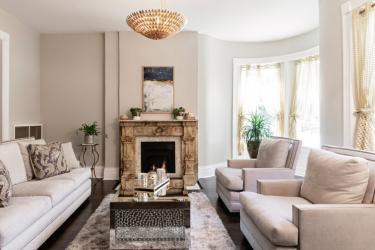 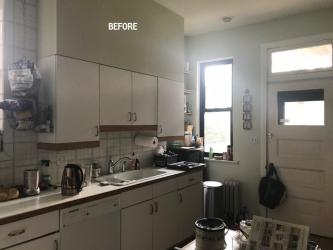 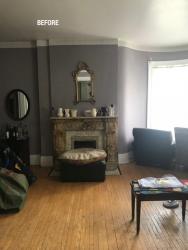 It is often the greatest reward to see your vision come to life—and such was the case for this St. Louis couple who wanted to update their grand but outdated historic home in Shaw. Built in the 1890s on a quiet tree-lined street dotted with many other spacious multi-family dwellings, the house possessed a spectacular Victorian character they definitely wanted to preserve. After coming up with a specific design vision they wanted to achieve, they called on Ladd and Jen Suydam, owners of Ladd Suydam Contracting, LLC, to guide their extensive renovation.

“The homeowners wanted to keep the original historic style of the house,” says Ladd. “The difficulties we faced were a closed-off living room and kitchen. To accomplish their goals, we removed a mother-in-law staircase that led to the third floor that was no longer being used. While doing this, we had to revamp a structural opening that would allow an open concept between the kitchen and dining room. Although our original call from the client was for a kitchen and living room remodel, we saw that the needed scope encompassed the whole first floor,” he notes.

Additional goals that were met during the renovation included adding forced air to the first floor, new floors throughout, remodeling the powder room to allow for the laundry to be brought up from the basement, updated lighting, renovating a side room office into a cozy nook and bar area and revising the exterior rear wall to bring in more light and allow better access—as well as a visual connection—to the back yard. Beyond this, the homeowners had two marble fireplaces that were salvaged from the 1904 World’s Fair. During the project, Ladd and his team were able to bring them back to life with a proper installation and even adding an operable gas fireplace insert to one of them.

“The wife’s decorating sense tended to lean towards traditional, but she wanted a slight modern take on it,” says Jen. “We took cues from some of the gold elements she had around her house—and she also loves bees. A hexagon pattern makes its way throughout the design in several different areas, from the new bathroom floor to the new light in the bar area, which were chosen by our client as a nod to the honeycomb. Other fun elements include a dragon motif on the sofa she chose to emulate the mascot of the Saint Margaret of Scotland Church and school in their neighborhood,” she adds.

Jen and Ladd guided their clients with fixture selections such as the cabinet design, countertops, lighting, flooring, hardware, tile and paint colors. They also designed a hutch on the end of the perimeter run of the kitchen cabinets and counter so the wife could display some of her treasured items she currently had on open shelves in the previous kitchen. Gold and brass detailing for the hardware and lighting were used throughout as an homage to the home’s historic heritage.

“We enjoyed these clients immensely,” says Jen. “Some of my favorite memories include bringing lunch to the guys during break and hearing from one of the clients that they enjoyed Ladd singing on the job site—they promised a karaoke party when the project was over,” she laughs.  “I envisioned over the holidays this last year our clients entertaining in their space with family and friends,” says Ladd. “I know that was brought up at our first meeting to discuss their goals for the hard work and time put in to making that happen.”