Too Fine to Flip

First viewed as a potential investment property, this stately residence in the CWE Instead became home to its new owners. 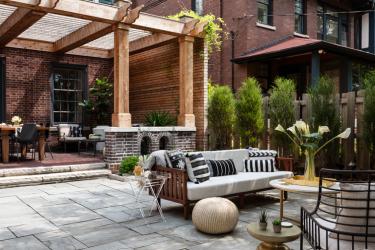 A handsome pergola tops the renovated patio, which was extended to a lower level entertainment area, surfaced in Pennsylvania Bluestone and equipped with an outdoor fireplace and barbecue island. 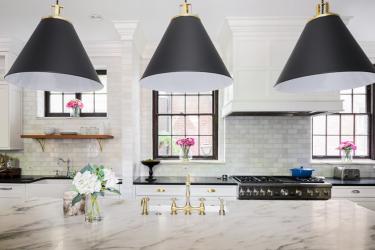 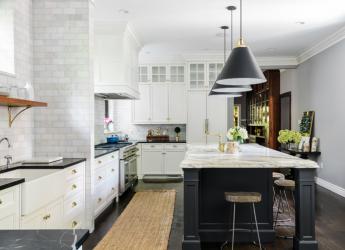 Taken down to the studs, the kitchen was expanded, incorporating the former pantry, laundry room and rear entry vestibule.  Clad in marble subway tile, the partial wall conceals the plumbing pipes.  Now stunning in black-and-white, the kitchen adjoins the original butler’s pantry , which was converted to a "scullery" while preserving its rich wood cabinetry. 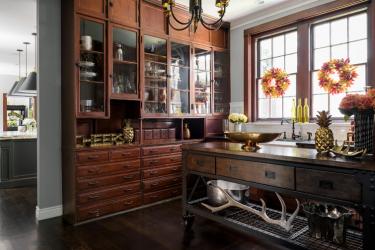 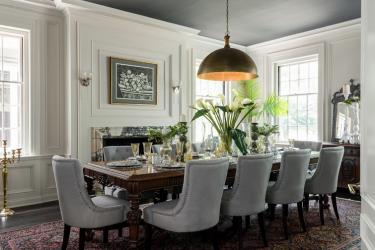 Fresh paint, all-new lighting fixtures and a refinished floor restored the grandeur of the formal dining room.  Purchased at an estate sale, the magnificent table once belonged to the owner of St. Louis’ landmark Cheshire, and the button-tufted chairs are upholstered in linen.  Above the original marble fireplace is a monochromatic still life, painted by the homeowner’s uncle. 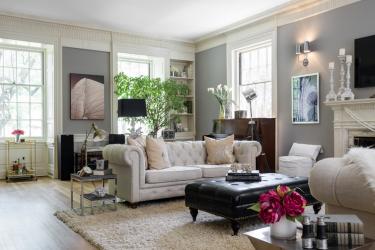 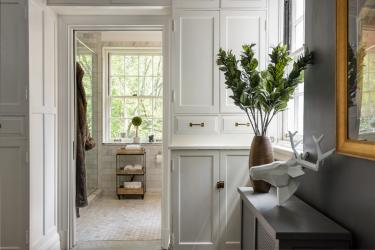 Viewed from a dressing room, the master bath was doubled in size by replacing the wall that had separated the original his-and-her bathrooms with a glass-enclosed shower, accessible from both sides. 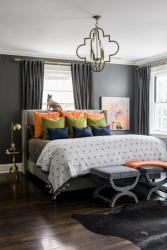 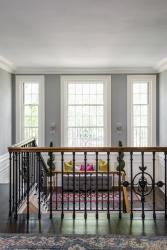 Perfectly intact, the staircase banister’s elegant wrought-iron design resembles the ornamentation on the railing above the home’s entry portico, which is visible through the window. 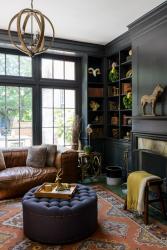 Painted a rich charcoal gray, the paneled library was transformed into a comfy den, with a built-in TV, caramel-hued leather sofa and tufted charcoal linen ottoman. 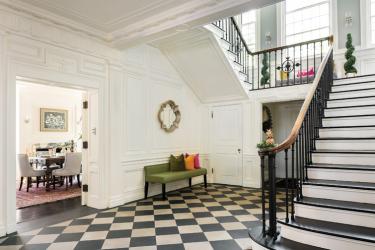 Several weeks ago, the PBS station aired "A Place Worth Saving: The Story of the Central West End," chronicling the ups and downs of St. Louis' historic enclave since the World’s Fair era. Among those the documentary credits for revitalizing the neighborhood are the courageous rehabbers who began salvaging and restoring the CWE’s magnificent homes in the 1960s.

Fast forward to 2015, when this energetic young couple joined the preservation effort. Before marrying, both had lived in vintage homes, and the husband had renovated two—the first for himself and a second in Compton Heights, which the newlyweds restored together. Both had busy careers as professionals in the medical field; their family had grown to include two little boys, and although they’d started thinking about the need for more space, they were in no hurry to move. Until...

The husband’s mom is a real estate agent and had recently toured a century-old three-story that was for sale in the CWE. It needed work, but she thought her son might be interested in the residence as an investment property, purchasing and renovating it for resale.

Built in 1915 for Nathaniel Ewing, founder of one of St. Louis’ first electric light companies, the elegant Georgian Revival was designed by H. Guy Study, a local architect responsible for several city landmarks. The 7-bedroom classic was set on a 1/3-acre lot with a nice back yard and had been owned by only three families throughout its 100-year history.

For the prospective buyers, it was love at first sight. “The grand entry and staircase were amazing,” the husband remembers, “and the second-floor bedrooms were all en suite, instead of the typical central-hall layout.”  Then there were the magnificent architectural details—ornate woodwork and fireplaces, French doors and large sash windows. Almost instantly, the couple rejected the idea of flipping the property and decided to make it their own.

Their offer was accepted with the stipulation that no major changes would be made to the original floorplan. Robinson Remodeling Services was chosen as the builder and renovation began in January, with the husband acting as general contractor, the wife scouring the internet for new furnishings and decor ideas and the mom stripping outdated wallpaper. Completion was targeted for November, but the plan gained urgency when the couple’s existing home sold quickly, forcing the family to find temporary accommodations and jam the furniture they intended to keep into the Georgian’s living room.

Construction started with installation of central air conditioning, relocation of various plumbing pipes and demolition of the kitchen, which would be rebuilt combining the former kitchen, pantry, laundry room and rear-entry vestibule into one spacious culinary/gathering area. “The house was sold ‘as is’ and, in view of its age, we weren’t surprised to run into a few problems,” the husband says rather casually. Opening the kitchen walls, for example, exposed significant termite damage. Upstairs, structural repairs were expected to be minimal, but disaster was narrowly avoided when dry rot was discovered, threatening to bring a bathroom crashing down through the kitchen ceiling.

Nevertheless, what makes this project so remarkable is how much of the home could be preserved. The original radiators had been built into the walls, and previous owners had installed a high-efficiency boiler, making the heating system fully serviceable. Most of the white oak floors were in good condition and simply refinished, and a coat of white paint was all it took to revitalize the exquisitely detailed crown molding and wainscoting in the imposing entry foyer.

At some point, however, the foyer floor had been covered with linoleum.  When peeled back, it revealed dramatic black-and-white marble tiles laid diagonally in a checkerboard pattern, and vigorous grinding and solvents restored the floor to its former beauty. The grand staircase’s handrail and artistically crafted wrought-iron balusters were fully intact, so the carpeting was removed and the treads painted black to complement the rejuvenated floor.

Their attention to detail is evident here, as well. The kitchen’s window frames were salvaged and the sills replaced with marble. McMillan Cabinetmakers fabricated the traditionally styled cabinetry, the builder custom-designed a matching range hood, and when the selected faucets weren’t available in satin brass, they were replated to correspond with the cabinet hardware. McMillan also transformed the adjacent butler’s pantry into a “scullery,” modifying and duplicating the original cabinets to include a sink, dishwashers and beverage/wine storage.

On opposite sides of the grand entry, the formal living and dining rooms were brightened with fresh paint and all-new lighting, since the original fixtures had been removed. In the dining room, a dark charcoal ceiling makes the white walls and woodwork “pop,” complementing the refurbished marble fireplace surround. Formerly a paneled library with exposed quarry tile floor, the den is now a cozy family space—the paneling painted a deep gray, a TV integrated into the existing shelving and the fireplace converted to gas.

On the second floor, all three bedrooms included built-in closets and adjoining baths, which were updated. Typical of the era, the master suite further emphasized privacy with separate baths and dressing rooms for the owners. To enlarge the space, the “lady’s tub” and the wall separating the bathrooms were removed and replaced with a glass-walled shower, accessible from both sides. The original cabinetry and brass hardware, however, were retained.

Off the den, the patio was rather small and in need of a major overhaul. The patio’s brick flooring was replaced and a handsome pergola and privacy wall added. Steps lead to an expansive lower-level terrace, paved in Pennsylvania Bluestone and perfect for fresh-air entertaining, with an outdoor fireplace and barbecue island with grill, kegerator and beverage center.

Modernized yet thoroughly faithful to its historic origins, this superbly renovated residence is a tribute to its owners and conclusive proof of the documentary’s premise. The Central West End is definitely worth saving!