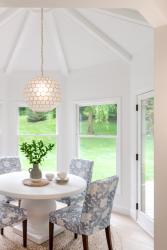 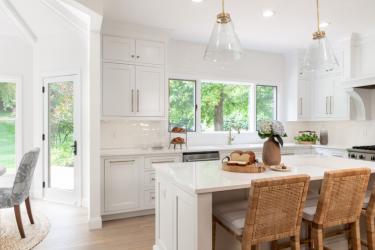 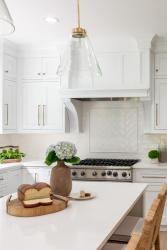 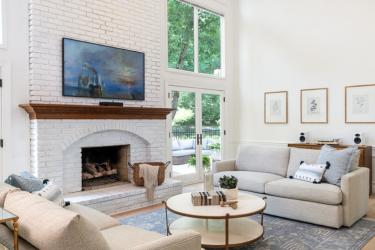 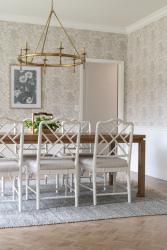 Tony-nominated Broadway star Taylor Louderman moved to St Louis to reside closer to her family, but the region held other enticements, too. “My husband and I moved from New York City, so we had been used to the concrete jungle. What also drew us to the suburbs was the one-acre lot and the outdoors, not that I want to go camping or anything,” she laughs, “I haven’t done that since I was a kid, but we just wanted to have the open spaces and an inviting outdoor area.” Things that don’t typically come without a hefty price tag in the big apple.

“I wanted a home with great bones but that needed some updating. I wanted that more than buying a new house because I wasn’t in love with new builds. Besides, they didn’t have a lot of grown-up trees,” Taylor says excitedly. Eventually the couple found a dream of a home. “What we have here is an acre lot with fully grown trees. And it’s a great location!”

Large windows ushered in the light and beauty of the great outdoors. The original kitchen, like much of the home, had a style reflecting the era in which it was built; dark stained wood, featured in the cabinets, rendered the space feeling smaller and darker. “I really love a lot of light. Cheerful, bright spaces make me really happy,” says Taylor.

With the help of Krista Howard, co-owner of KH Interiors with her husband Kevin, Taylor was able to design spaces suiting her admiration for dazzling white rooms. “Ethereal” and “heavenly” are the words Krista uses to describe the final result of the home’s newly redesigned spaces. “The living room is one of my favorites because after we’d painted it white, the vaulted ceiling felt enormous. The room feels never-ending, like you are floating there.”

For the kitchen, the color "artic" was selected for the cabinets, which hail from Shiloh Cabinetry. The walls offer a crisp, delicate white, pairing well with the cabinets without overpowering them. These shades combine to create the perfect backdrop for the room’s features like the quartz countertop that was honed “so there’s no sheen on it,” reveals Krista. White subway tile arranged in a herringbone pattern and delicate-looking hardware, made to appear aged, dazzle alongside the gorgeous light fixtures, which Krista calls the room’s jewelry.

To get the white rooms to communicate with each other, “you need to vary the textures going from one room to the next,” offers Krista. “We kept inviting new metals, woods or textures into each of the rooms. It’s like telling a story with each chapter being a little bit different.” The layering in of varying details keeps the home’s designs feeling fresh and new. Hence, Taylor’s style of coastal casual blends and fuses from room to room with a boho look achieved through items like rattan chairs that don’t outshine the classic quality of the overall designs.

“White walls allow the homeowners' furnishings to speak,” says Krista. Taylor might agree, as she looks forward to changing out her décor with the coming seasons, anticipating the holidays especially. Krista says, “You can never tire of white, not really. Change your artwork, change the window treatments, change the décor. But leave the white walls. They’re timeless.”