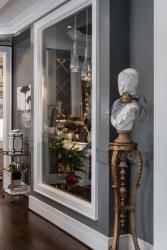 From the dining room, guests can view the wine room through this window. In Haupt’s previous home, the wine cellar was located on the lower level. A floating stone counter displays part of Haupt’s collection. 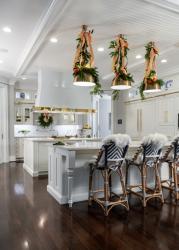 In designing the home, owner Melissa Haupt wanted a large kitchen. Rusted Chandelier’s Patti Porter, who loves to utilize fruit for kitchen holiday décor, added lemons and oranges for a pop of color and to play off the brass hardware highlighting the artful La Cornue range and custom cabinetry by Beck/Allen. 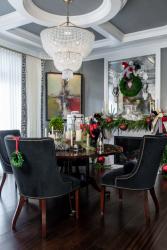 Navy velvet chairs encircle the round table, which was already accessorized with an artful grouping of ginger jars, champagne bucket, hurricane lamp and candles. Patti Porter added red oversized ornaments, ribbon and touches of gold. “I like to tell people, ‘don’t clear your mantels. Just add to them,” says Porter, who took her own advice and hung drippy Norfolk pine garland in front of the mantel, not on top of it, to keep Haupt’s tasteful pheasants and hurricane lamps in place. 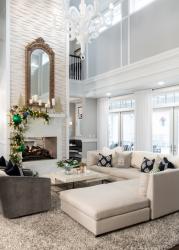 The Moooi chandelier was the starting point for the great room’s interiors, which combines contemporary styling such as the chandelier and the fireplace’s textured tiles with the home’s exquisite, traditional trim work. Three sets of French doors open to the outdoor living space for easy movement in and out. 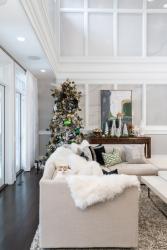 Patti Porter says she’s usually inspired by a room’s existing aesthetic for holiday decorating, evidenced here by the tree’s greens, blues and golds taken from the contemporary artwork on the credenza. Fraser, a Scottish fold, snuggles amidst a throw on the sectional. 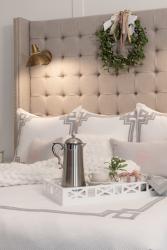 Inspired by a photo, homeowner Melissa Haupt and designer Rachael Dolan collaborated in designing the custom bed with integrated reading sconces for the primary bedroom. Ribbon and greenery add a touch of yuletide ambience. 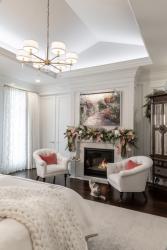 “Surrey Cottage,” a painting by Mark King, holds a place of honor above the primary bedroom fireplace. Patti Porter used the work’s “romantic” pinks, greens and golds in selecting long-stemmed dusty miller and eucalyptus to create a garland accented with five different ribbons. Charlie the cat, a Scottish fold, approves. Homeowner Melissa Haupt found the bowl sink at the Kohler Design Center in Wisconsin, her home state. The wall mount faucet is Kohler as well. With book-matched marble for the counter and the wall’s chevron pattern, “the powder room is gorgeous,” says Patti Porter. “In a room as exquisite as this, a simple pine garland and ribbon is all that’s needed.” 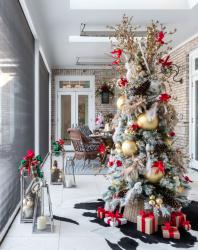 Using birch sticks as a topper coming out of the tree and placing the cardinals on outer branches help the tree appear three-dimensional, says Patti Porter. She used natural elements—birds, birch logs, pine cones and feathers—on the tree for the outdoor living space. The basketweave tree collar continues the use of natural elements, while the cowhide is an unexpected touch grounding the space. The outdoor space’s many accruements include ceiling-placed heaters and retractable screens for 4-season outdoor living. 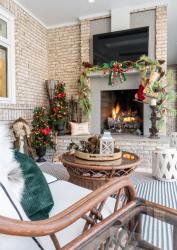 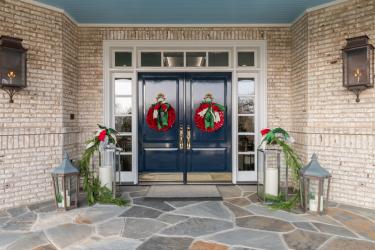 To welcome holiday guests, Patti Porter utilized homeowner Melissa Haupt’s magnolia wreaths lacquered in red and dressed oversized lanterns with simple greenery and pine cones. The front doors are painted Fine Paints of Europe’s Hollandlac Brilliant in Navy Blue, a hint of the colorway to be found in the home’s interiors. Homeowner Melissa Haupt purchased the Serena & Lily swing for the space and painted her existing rattan and wicker furniture a crisp white. Faux fur and fleece throws and pillows add seasonal warmth to the outdoor spaces. Melissa Haupt didn’t need much convincing when she was asked to open her home for the Deck the Halls of Glennon Homes Christmas Tour in 2020. An accomplished hostess, she loves entertaining. “It’s a great cause, and I was happy I could contribute,” says Haupt.

What gave her a slight pause was the fact she’d always done her own holiday decorating. Talking with a Glennon Guild officer, Haupt wondered aloud if she could handle the scope of yuletide trimmings Haupt felt a tour home should receive. The Glennon Guild officer suggested Patti Porter, owner of Rusted Chandelier, could do the job, and Haupt and Porter transformed Haupt’s already exquisite home into a holiday wonderland.

“Her house is magnificent,” Porter says of the 4-bedroom Dutch Colonial in Frontenac. Designed by Mitchell Wall Architecture and Design and built by R.G. Ross Construction, the 6,500-square-foot home was inspired by Haupt’s love for architecture often found in the Hamptons. “I wanted a very open floor plan and to be able to access everything, from the outdoor living to my bedroom, from one level,” Haupt explains. “I also liked the concept of the house wrapping around the outdoor living spaces.”

Opportunities for outdoor living are apparent upon arrival, with front porch swings beckoning. Haupt painted existing rattan and wicker tables and chairs a crisp white. Overhead, the “haint blue” ceiling is a nod to long-standing traditions. The glossy front doors with gas lanterns on both sides are painted in Fine Paints of Europe’s Hollandlac Brilliant Navy Blue, a hint of the colorway to come in the home’s interiors. “I love navy,” says Haupt. “I have a lot of things that are traditional, and I wanted to utilize a lot of that furniture. But I also like a lot of contemporary details. Navy is a good way to coordinate styles because it’s classic. It never goes out of style as far as I’m concerned.”

Working with Mitchell Wall designer Rachael Dolan, Haupt envisioned interiors that were crisp, yet relaxed. The great room is an excellent example of traditional and contemporary flowing together cohesively. Haupt saw the Moooi chandelier in a design magazine and fell in love with it. “That chandelier is very contemporary but if you look at the room itself, with the trim, the wood, the very foundations of the home are very traditional architecturally. But it all works together.” A cascading, see-through fireplace is clad in modern textured stone tiles and accented with a traditional mirror hung above the marble mantel and fireplace surround.

For holiday décor, Porter says she’s usually inspired by a room’s existing aesthetic to enhance what’s already there. She took cues from a contemporary artwork’s greens, blues and golds in decorating a large, flocked tree tucked in a corner of the great room.

Porter used a similar approach in the primary bedroom, where a beloved painting hangs above the fireplace. “My late husband and I loved to buy art when we traveled, and this piece was purchased at a gallery in Vail, Colorado,” Haupt explains. “It’s an original Mark King. I love waking up and looking at it in my bedroom.” Porter says the work’s “romantic” pinks, greens and golds influenced her use of long-stemmed dusty miller and eucalyptus to create a garland accented with five different ribbons. “Two ribbons are OK, but five are great to get all the texture and colors,” says Porter.

For the holidays, Haupt takes turns hosting Thanksgiving or Christmas with one of her sisters. When it’s Haupt’s year to host Christmas for their families, which includes Haupt’s adult son and daughter, she places the prepared dishes on one of her two kitchen islands. “Nobody’s bumping into each other and the space flows very well,” she says. Guests then make their way to her classically exquisite dining room, with its navy velvet chairs, window treatments embellished with a Greek key border, marble fireplace surround, detailed wood trim and viewing window into the adjoining wine room. When she first toured the home, Porter says she was taken with the grouping of ginger jars, candles and champagne bucket Haupt had placed on the dining table. “I wouldn’t change anything,” Porter told Haupt. “I’d just add to it.” Utilizing drippy Norfolk pine garland and cedar in front of the fireplace mantel rather than on top, Porter could incorporate Haupt’s silver pheasants and glass hurricanes. Porter accented the rich navy with red oversized ornaments and ribbon and touches of gold.

If the December weather is nice enough, Haupt’s guests move to the outdoor living space, which flows from the great room through three sets of double French doors. Decked out with a dining table, a fireplace, TV, grill and heaters in the ceiling, it’s a true four-season space Haupt loves.

For the Deck the Halls home tour, Porter set a beautiful tablescape and place settings utilizing Haupt’s crystal and Christmas china. Porter added a flocked tree decorated with cardinals, birch logs, pine cones and feathers. Continuing the use of natural elements, Porter used a basketweave tree collar instead of a skirt and added Haupt’s own cowhide on the floor to ground the space. Porter likes to group smaller baubles together in what she calls “ornament bouquets.” Instead of having just one 5-inch ornament, it makes more of an impact to group smaller ornaments together, particularly when mixing matte and shiny textures, Porter says. Both women say the “flying cardinal tree” turned out to be a favorite among all of Porter’s holiday designs.

Hundreds of visitors enjoyed Haupt’s home during the Deck the Halls tour, which raises funds for the children cared for by SSM Health Cardinal Glennon. “I was delighted to be a part of it, and I think people enjoy seeing what is going on in St. Louis from an architecture and design standpoint,” Haupt says. “What motivates us most, of course, is the ability to help the kids.”