From the outside, this St. Louis home may resemble a Tudor. But inside, Mediterranean features and pops of brilliant color offer boutique Turkish hotel vibes. 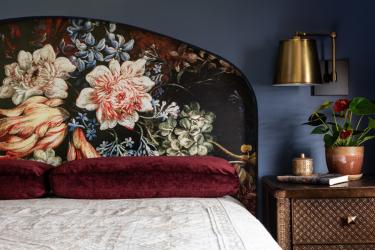 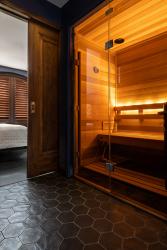 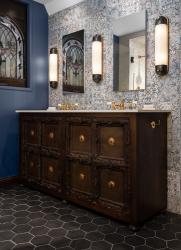 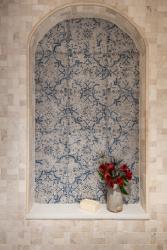 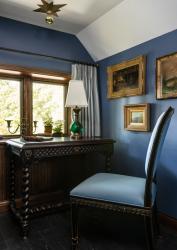 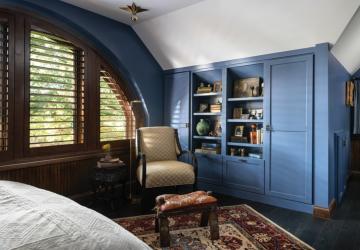 From the start, Brad Zimmerman was drawn to the house he now calls his beautiful European cottage. “It was the first home I looked at, and I just knew it was the house for me,” he says. It had sat on the market for 90 days because the house “seemed a bit quirky.” It was a home originally built in 1933. “But it had so much character that you could truly make it your own.”

Brad set out to add his own spin to the abode and hired a creative team that included a designer, contractors and an architect. “The outside has a castle appearance with touches of old-world,” says interior designer Geri Hayes of Ideas Only. “The first floor had an old-world vibe, too, so I knew why Brad had bought the house. He loves antiquities.” The first floor came with a vaulted ceiling and a fine stone fireplace. All Geri and the team had to do was refinish the flooring and add some new tile in the entryway.

The second floor was another story. “The salmon-colored stucco on the walls was razor sharp,” says Brad. The 1970s wallpaper was orange and pink, “while the bathroom’s shower looked like something off a cruise ship. The floor’s roof lines came down so low that you couldn’t place a bed against the wall without bumping your head,” Brad says. Architect Chris Marshall took the inventive step of bringing out the walls farther. Before this, the ceiling would end a few feet from the floor.

In terms of design, Brad wanted an Old World feel with some Turkish flair. “He asked to be transported to another time and place in an authentic way,” says Geri. “That meant that all the design elements couldn’t appear new. Authenticate and replicate was our design mantra.”

Dana Dunbar, general contractor of Lorrien Homes, brought in his team of craftsmen. “We were in tune with Brad’s vision and approach,” he says. “All the upstairs doors are solid wood, but much of the trim we cut ourselves. Everything was very specific. And because of that, it was a really collaborative process.” Together, the team brought in maple floors with an ebony stain to appear aged and worn. Meanwhile, the hallway and bath floor tiles gave an Old World charm, with weathered ebony finishes and hexagonal tattered edges.

Adding to the Turkish flair, Brad wanted a specific type of blue. “Geri did a fantastic job finding the right blue to create the right feeling,” he says. That feeling was one of relaxation and calm. “Brad wanted to come home and feel like he was on vacation at a boutique Turkish hotel,” recalls Geri, hence, she selected a Benjamin Moore paint called Blue Heron for the walls. To compliment the Blue Heron, gold-toned brass star lights and plumbing fixtures were chosen. The amber colored accents work with the blue vanity tiles, while the gold, blue, and garnet hues featured in the rug and the floral design inside the bed arch solidify the Mediterranean palette. The entire palette is illuminated by the light streaming through the shuttered arch window, reminiscent of a Mediterranean beachside veranda.

Choosing the right color was key. “The first thing we perceive is color, and so working with clients, I show them they should start with that,” Geri says. “Color, contrast and then shape and form—that is the order of designing a space.” With each detail, the home pays subtle homage to these pillars of design. But for Brad, his home’s color might be the best part about his space. “The blue we chose makes you feel like coming home to kick back and relax,” he says.