Homeowners create their ideal stay-at-home getaway. Among Walt and Maryann Vitale Alles family and friends, their landscaping is known as the “Alles Oasis.” 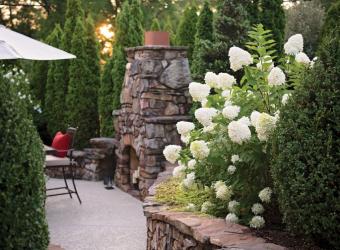 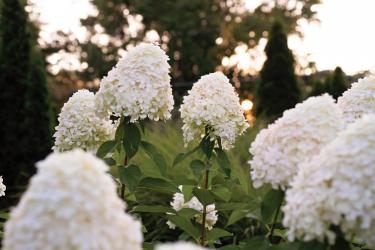 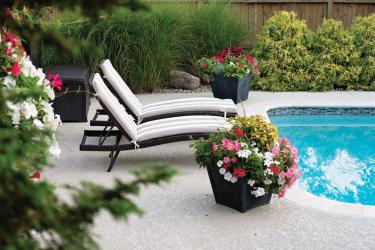 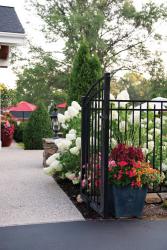 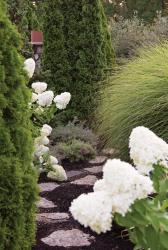 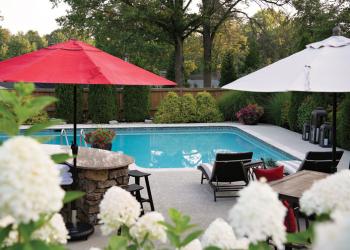 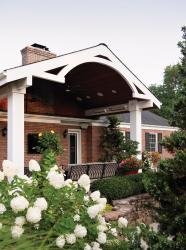 It is easy to see why. From a wide terrace spanning multiple rooms in their red brick ranch home in Des Peres, two staircases descend to a jewel-like swimming pool that glitters sapphire blue. Although the space is small, it is picture-perfect. Stands of columnar DeGroot’s Spire and Emerald Green arborvitae, interspersed with burning bush for fall color, provide a buffer from neighboring property. Graceful, billowing Karl Foerster Feather Reed Grass and pyramid-like Golden Threadleaf false cypress soften a wooden privacy fence.

It was hard to imagine such an oasis could exist when the Alles first viewed the property in 2011. The yard was a wasteland. Eleven trash cans cluttered the unkempt space. The hard, spiky balls from three sweet gum trees littered the ground. A chain-link fence and a line of overgrown yews spanned the space where terrace steps now descend to the pool. “When I looked at the yard, I didn’t even realize there was a pool,” Maryann recalls.

The couple knew the house was a rehab project and they looked forward to transforming it to suit their lifestyle. They were ambivalent about the pool. “We never wanted to buy a house with a pool,” Walt says. “We thought about taking it out but it turned out it was in great shape.” With enough on their plate renovating the house, the couple decided the pool would stay. It has turned into an important part of their life together.

Both Maryann and Walt had been married previously. With six children between them, they knew they needed space for their children and grandchildren to informally gather and mingle. Once they made a decision to keep the pool, they were determined to turn it into a welcoming outdoor space that everyone could enjoy.

Maryann, who co-owns Berkshire Hathaway HomeServices Select Properties, is accustomed to looking at houses and she had a vision of the back yard as a two-level space. The top would connect with the house and provide an informal, covered gathering space where guests could visit and watch television. She also wanted an outdoor kitchen, bar and fireplace near the pool. Both spaces needed to blend seamlessly with each other and with the house. Privacy was extremely important.

“We talked with several contractors and they wanted to give us what everyone else had,” Maryann recalls. “I wanted something that looked like it was original to the house.”

Then, they met with Dan French of Dan French Masonry. “I told him about my vision and he said, ‘Lady, if you can draw it, I can build it.”

While originally the couple had planned to work first on the house and then on the outdoor space, a hold up with the master bathroom turned their attention outside. “We knew we were eventually going to have to do something with the outdoors, so we finally decided we should go big or go home,” Maryann recalls with a laugh. “It just snowballed. We were doing the stonework outside at the same time we were working on the interior of the house.  Even though it was not our intention, it turned out to be great. When Dan finished the stonework, we had a place we could sit outside and have a drink.”

The hardscape and stone work were only half of the vision, however. Any oasis needs lush green plants. Walt jumped into that part of the design. Recently retired from a career in heavy equipment sales, Walt had gone from living on a farm in Union, MO, to moving into Maryann’s high-rise Clayton condo when the two married. With time on his hands and a background that included growing up in a construction-oriented family, he was actively involved in renovating the home he and Maryann had bought together. He had no qualms about taking over the landscaping. “I love being outdoors, and I can dig a hole as well as the next guy,” he quips.

He was not without professional advice, however. The knowledgeable horticulturists at Timberwinds Nursery in Ellisville became his go-to experts. “I would visualize what I wanted to do. I would go out there and talk to them and ask them what do you think about this plant.  We would talk about the height and width and they would give me suggestions. Low maintenance was always an important factor.”

While Walt specializes in planting trees and shrubs, Maryann takes over when it comes to selecting the flowers that go into the two pots that frame the oasis entrance, the five window boxes and four poolside containers. Beginning with pansies in the spring, around Mother’s Day she switches out the containers with brilliant flowers that flourish in the bright sunlight around the pool and thrive in the heat of summer. Favorite plants include geraniums because “they are so easy and colorful,” marigolds and sun coleus. “I always use spikes and vinca vine and asparagus fern to trail. Every year they are a little bit different. Sometimes I take a picture with me.” One of her favorite places to shop is Greenscape Gardens in Des Peres. “I usually have to make two trips to get everything in the car,” she says, laughing.

Each year, to cover the unattractive meters attached to the side of the house, Maryann plants mandevilla vine at the base of a trellis.

To keep her containers flourishing throughout the summer, she adds chicken manure to the potting mix. “I have learned through the years to buy smaller plants; they grow so fast and I don’t want the containers overcrowded.”

The blend of Maryann’s design and Walt’s plantings has harmonized into a gem-like garden neither one envisioned when they first viewed the trash-filled, overgrown yard. “People are always surprised when they come over and walk into the back yard,” says Walt.  “It is not very big but it has turned into our oasis.”