This Gothic revival Tudor home gets a timeless look full of elegant details. 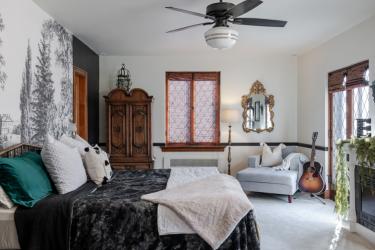 The accent wall behind the bed in the master bedroom is wallpaper from Graham and Brown that Christa customized to render a fabric feel. Combining several different colors running throughout the home, Christa chose pops of warm wood with the bamboo drapes and trim in the door and windows. 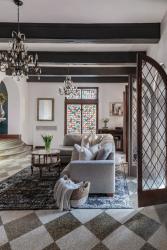 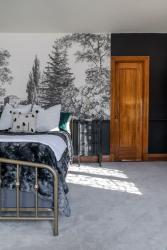 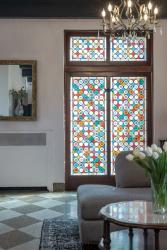 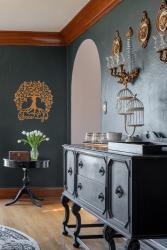 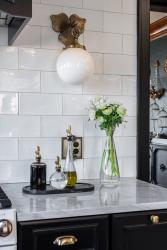 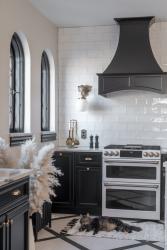 The smaller pendant light fixture is composed of opal milk glass made in America. These types of lights would only have been found in the most elegant of spaces during the 1920s and '30s, says Christa. 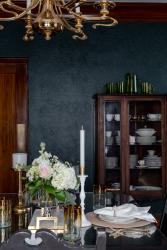 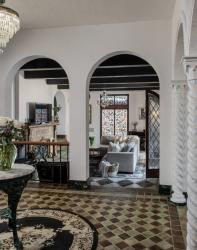 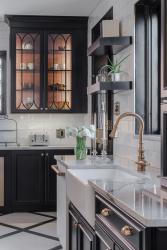 Loren painted the window trim a matte black to give an additional pop. The leaded windows are original to the home and offer so much natural light that the black cabinetry from Starmark is further illuminated against the creams and whites used in the kitchen.

Realtor Christa Edelen (Jackson) of Lou Realty Group always loved old houses. But when she and husband J.T. Edelen came across what would eventually become their forever home, Christa never imagined she would fall in love with a Gothic revival Tudor house. The abode’s construction began in 1926 and ended around 1932, a period known for its elegance. “One of the reasons we love this home so much is because it’s almost all original,” says Christa. “I love good architecture, and this Tudor home called to me—the woodwork in the doors, the high arched windows—it looks like a castle inside, especially in the foyer.”

However, stepping inside the house during the initial look-around, Christa thought to herself that the wall separating the kitchen from the foyer had to go. So did the original kitchen’s egg yolk yellow wallpaper with frilly floral motifs. “What we really wanted was a Gothic apothecary castle, 1930s-style kitchen,” she says, listing off all the space’s rich vibes. Thus far, the kitchen has received the most updates, but its changes have been impacted by the rest of the home’s unique look.

“When we bought the property and started talking about what we wanted for the kitchen, we both knew that we wanted it to be period-specific. We wanted to get everything as close as possible to the kitchen as it should have been originally.” The challenge was making the kitchen look like it had always been that way, like the rest of the home.

The couple turned to Loren Lang of Lang Building Solutions and Ginger Fridley, lead designer, for help making their vision a reality. Loren helped disguise a series of pipes within one of the kitchen cabinets and worked in other ways to keep the project on track. “We general-contracted the whole kitchen,” says Loren. “We supplied the designer and everyone that had their hands on it, from the electricians to the plumbers, and brought in Ginger who worked with Christa on the designs.”

Ginger was eager to work on a period-inspired home. “I love clients who know what they want. It helps me channel my energy into their vision. Christa is a strong, confident decision maker, and together we were able to make everything fit the period,” says Ginger. The easiest way to begin shifting the home back to the 1920s and 1930s was to seek inspiration in the space’s existing features. Thus, the diamond shape of the leaded windows throughout the home is echoed in the kitchen’s porcelain floor that mocks the glitter of terrazzo material, something befitting the glitz and glamor of the roaring ‘20s.

Next, the women found inspiration in the heavily fluted columns and the archways in the foyer. “We had the arch in the kitchen above the refrigerator built to tie it in with the arched windows recurring throughout the home. The amount of detail in the home is incredible,” says Ginger.

At first, Ginger thought perhaps the amount of details Christa and her husband craved might clutter the house. “As a designer, you might think, ‘Oh no, this seems a little too much,’” Ginger reveals, “but I knew that as I was designing the cabinetry layout that if I stuck with symmetry and repetition, those basic design principles, everything would feel clean and restful, offering viewers a real wow factor.” As a result, everything they did had the amount of details Christa wanted. “In other words,” Ginger adds, “there’s a lot going on, but nothing ever feels overdone or stuffy.”

To balance the newly renovated kitchen with the rest of the home, Christa wanted to repeat some of its key elements. In the master bedroom, for example, she ensured that the accent wall behind the bed reflected the kitchen’s whites, rich browns and blacks by way of the wallpaper from Graham and Brown customized to offer a textured, fabric feel. The bedroom also has pops of wood in her choice of furniture and bamboo drapes. “I wanted to walk in the home and see a play of colors in the house with lots of blacks, clays, creams and nudes,” says Christa.

These exact colors hail from the main room’s mock terrazzo floor. Used by the family as a living room, the main room is sunken, allowing the lofty antique black and gold chandeliers above to cast a kaleidoscope of shimmering speckles. The pigments underscore the vividly hued stained-glass window nearby. Thus, pops of color wind their way inside the house from the oversized rug in the living room to the peppering of gold hardware in the kitchen. “One of the first things I did was wallpaper the powder room off the foyer. And I did it in bold black and gold using a large waterfall deco wallpaper,” Christa says.

Another example of standout color occurs in the little inlays of gold acanthus leaf in some of the kitchen’s wall fixtures. “These symbolize enduring life in ancient Greece,” Ginger explains. “Isn’t that great for a kitchen you want to endure?” Without a doubt, Christa wanted her home to look gorgeous well into the future. “We wanted something that wouldn’t just be timeless because it reflects the past,” she says. “We want people in the future to still think our home is gorgeous.” The attention to age-specific details makes the home transcend any modern touches. “The lighting specifically was something that I was super diligent about,” Christa says. For her, the magnificent light fixtures ultimately transformed the house into a richly adorned period home.

In fact, she had collected so many light fixtures that her basement was filled with them. Looking for the perfect one to fit her hallway, she finally settled on an antique light on Facebook Marketplace. “We thought, ‘That’s the light we need.’ And when we later showed it to our friends who live down the street they said, ‘We have that same exact light in our hallway, too. It’s original to our home!’” she says with a giggle. It turns out, the light Christa had scoured over the internet for might actually have been the original light fixture from her home’s hallway. “It’s these little touches, all the added details, that make a space feel period specific,” Christa explains. “The lighting is really the most important part. That was the icing on the historical touch.”