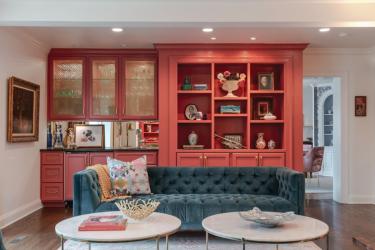 “It does not give me pause to order a teal sofa,” says Cathie Laufketter. “I pause to do anything white or neutral.” The Anthropologie sofas are actually portions of two sectionals purchased for the Laufketters’ previous home. 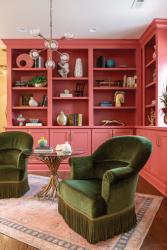 “I feel color sets the mood for your home,” says Cathie Laufketter. “I want my house to feel lighthearted and a place where there is laughter and kids running around and it’s not the end of the world if something gets spilled.” She brings a lighthearted sensitivity to a corner of the living room, pairing fringed green velvet chairs and contemporary lighting with built-ins painted in Benjamin Moore’s joyful hue, Lip Gloss. “It’s an interesting color that changes tone throughout the day.” 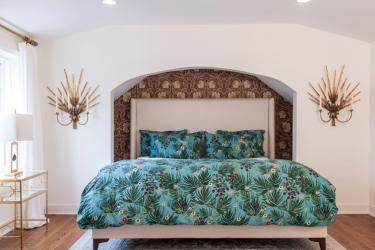 Pushing the headboard into the wall’s arched opening was inspired by a similar look Cathie Laufketter observed in a French chateau. The vintage fan sconces were purchased years ago at the Randolph Street Market in Chicago. 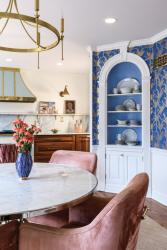 Wherever there were slanted walls in the secondary bedrooms, the Laufketters added charming book nooks (or sleepover beds). “I also added sconces to the book nooks,” says Cathie Laufketter. “I love coziness. It must be my Danish roots.” 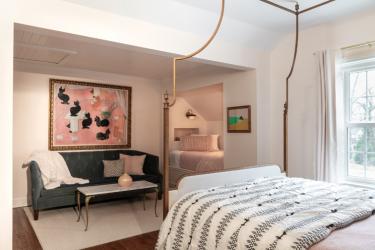 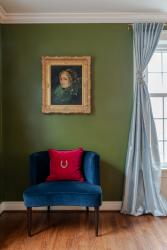 The La Cornue range in Roquefort and matching range hood are the focal points of the kitchen. Lumen, an exotic light blue marble with hints of gray, green and white veining forms the backsplash and tumbles from the island in a waterfall edge. 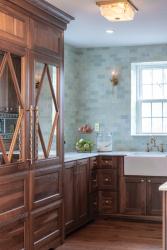 A spacious butler’s pantry was a must-have. A mirrored front-paneled refrigerator, inspired from a model at the RSI Kitchen and Bath showroom, provides a polished look alongside walnut cabinetry from Omega. The shimmering Wow tile in mint gloss is from the Fez collection. 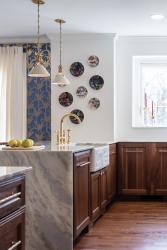 Many of us hesitate to boldly use color in our homes, particularly when it comes to big-ticket items like sofas or appliances. Audacious wallpaper or vivid paint hues? Forget about it. We’re afraid of making expensive mistakes, fearful a trendy shade will come and go before the paint dries or the sofa gets its first spill.

Cathie Laufketter is the exact opposite. “I feel color sets the mood for your home,” she says. “I want my house to feel lighthearted.” In fact, she pauses to make any major purchase or design decision in a neutral. She learned her lesson, she says, in her previous home, when she made a 180-degree turn and painted all the walls a shade of off-white. “It did not feel like a home to me,” Cathie says of her decision. “Pretty quickly after that, we went through the rooms one-by-one and repainted them.”

“Sometimes I have to talk myself into doing something neutral,” she adds. “That’s a lot harder for me, because I learned at the last house I just do not like white or off-white. I need color.”

And color she has, in the newly renovated home she shares with her husband, Matt, and the youngest of their three children. This is the sixth home in the past 15 years the Laufketters have renovated and updated, and all of them were older structures with considerable character. “We love historic homes and have so much fun reimagining them for modern living, while retaining as much of the original character of the home as possible,” says Cathie. “But when they’re done, I don’t know if we get bored or what, but something just moves us to start looking for another house.”

So it was for this home in Frontenac. The major appeal? It sat on two acres with room for a pool. The Laufketters have a large extended family. They like to spread out, especially during outdoor gatherings. In addition, the home had a three-car garage that had been added by previous owners—perfect for housing Matt’s love of old cars. The square footage also fit their family, with room for extended stays when adult daughters living out of town come home. The home’s exteriors of painted brick, stone and James Hardie siding oozed cottage charm.

The downside? The original home, built in 1936, had not been updated in years, although previous owners had added a functional addition less than a decade ago. Cathie could imagine reworking the home’s floor plan to provide better flow for their family. She could also envision adding en suite baths to each bedroom. “We wanted a home that could comfortably handle it when our kids are home at the same time,” Cathie says. They purchased the home in June 2020 and immediately began renovating the original portion of the house while living in the addition, which held a living room, office, full bath and a mudroom, plus the three-car garage.

The most significant renovation involved the kitchen and butler’s pantry. By removing walls and reconfiguring existing spaces, the home’s original kitchen now houses an expansive butler’s pantry, which was a must-have for the Laufketters. “In our previous house we had a butler’s pantry and I put our fridge and all food storage in there,” Cathie explains. “I wanted the same thing for this house because I prefer to have those defined spaces when I cook.”

Cathie had visited RSI Kitchen and Bath, where a mirrored front-paneled refrigerator caught her eye. With this fridge planned for the butler’s pantry, Hollie Cunningham, senior designer at RSI, suggested mimicking the fridge’s mirrored, diamond-shaped wood insets in the base of the kitchen island. Opposite the island, a La Cornue range in Roquefort with range hood painted to match stands as the kitchen’s focal point. “We had a La Cornue at our previous house and I am hooked,” says Cathie.

The color palette was inspired by the blue and pink hues in a painting Cathie found at an estate sale. She says the painting reminds her a trip she took following the path from one of her favorite books, All the Light We Cannot See. “My daughter and I went all over Normandy, France, and ended up in Saint-Malo, where this book is set,” explains Cathie. “This painting just reminds me of everything in Saint-Malo.” The painting is nearly as well traveled, as it went along to every cabinet, appliance and countertop appointment Cathie made during the design phase. “I probably drove everyone crazy with it.”

In the nearby breakfast area, the Laufketters removed a bay window and installed double doors. “On pool days we open them up and everything just flows to the pool area,” says Cathie. She went bold and bright with a Tenue de Ville wallpaper in cobalt blue; it blends with pink chairs at the breakfast table and island barstools in the happy hhue.

In the living room, the built-in cabinetry was painted in Benjamin Moore Lip Gloss. Cathie’s teal sofas were originally sectionals purchased for their previous home. “The sectionals were too big for this space, so we took off the smaller section of each,” says Cathie.

Whether teal sofas, cobalt blue walls or built-ins painted in a shade for lips, color creates a mood, says Cathie, who says she first ventured into interior design at the age of 12, when she redesigned her bedroom in red. “Cathie has amazing taste and knows what she wants,” says Cunningham. “It was very much a collaboration working with her, and I think her spaces turned out beautiful and unique.”

While Cathie says she won’t redo her bedroom in red again, she does understand the bold use of color is very difficult for people. “I have cousins who want my help picking a paint color, and they love it on the swatch, but then they just can’t do it,” Cathie says. “I always say to them, ‘it will look great, I promise you. Just do it.’ Color creates a happier mood. We all need it.”