Bloom on the Brink

Story and photography by Kristina DeYong 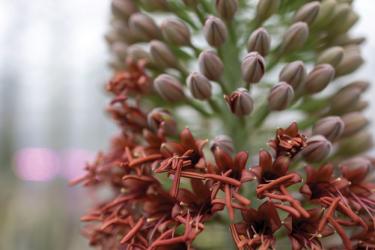 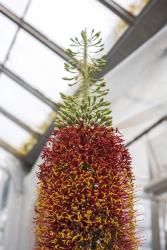 A critically endangered agave plant that flowers just once every 20 years bloomed early this spring in the Missouri Botanical Garden greenhouses. The Agave pelona is monocarpic, meaning that the plant will die after blooming.

The Agave pelona is endemic to the mountains of Mexico’s Sonoran Desert. It inhabits “sky island habitats,” which refers to its occurrence at higher altitudes where the temperature is much cooler than the surrounding desert. As temperatures rise with climate change, the Agave pelona is left with nowhere to go. This, along with pressure from collectors who seek it out for trade or personal collections, has pushed this already-small population to the brink of extinction.

With very few of these plants left in the world, the species’ survival depends on the remaining specimens’ ability to reproduce, so Garden horticulturists hand-pollinated the flowers to provide the plant with the chance to produce seed. This rare bloom is more than just a pretty flower—it has allowed Garden horticulturists to work to protect the future of the Agave pelona.