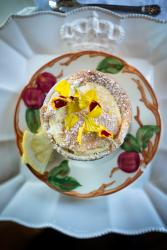 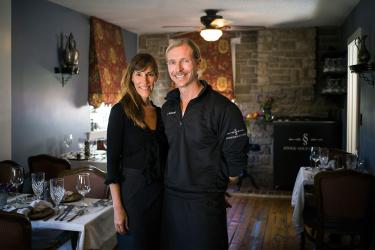 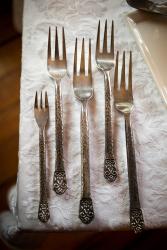 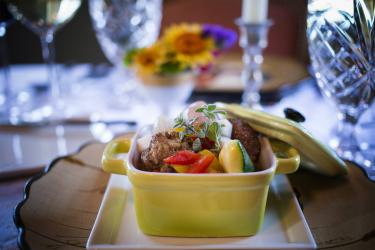 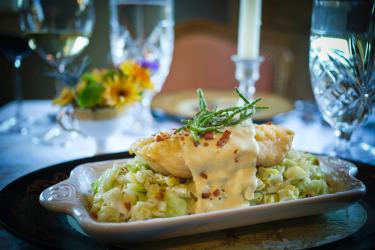 McConnell fell in love on a Russian icebreaker transiting the Arctic. It’s not your usual how-we-met story, but then, Stone Soup Cottage is no ordinary restaurant.

The cottage is a pre-Civil War home in Cottleville, about 30 miles west of St. Louis. The McConnells’ offer one seating, Wednesday through Saturday, serving a six-course tasting menu that changes every three weeks. Reservations usually must be snagged six months in advance, longer for Saturday nights.

Despite the fixed menu, Carl is happy to alter his dishes for vegans and others who require special diets. “We’ve become known as a trustworthy source for those with dietary needs,” Nancy says.

The McConnells worked for years in the travel industry – she was the cruise director and he the executive chef on the ship where they met. Cottleville reminds them of Europe, Carl says, mentioning that the town has a good butcher shop, flower shop and gourmet chocolate shop. “I lived my life traveling around the world, and now I live my life in a 10-square-mile area,” he says. “It’s been a life-changing experience.”

Most of the restaurant’s produce comes from Wiese Nursery, about a mile down the road. “When we conceptualized the restaurant, I went to the farm stand,” Carl says. “The owners, Norman and Ruth, were growing a few things. I was very impressed with the quality.” This winter’s crops, grown in greenhouses, include lettuces, microgreens, herbs, leeks, baby beets, shallots and four types of carrots. “I draw inspiration, of course, from my friend Norman,” Carl says.

He also draws inspiration from Old World cookery, perusing 18th–century English and French cookbooks. “I look for unique ingredients,” he says, then modernizes the recipes. He became intrigued by periwinkles, a type of sea snail, and decided to use them in a recipe inspired by Old English and Northern French recipes. Periwinkles are so small that nut picks are too large to release the meat from the shells, so he sterilized straight pins and distributed them to the diners. “We always like to have something off the beaten path,” Nancy says.

• Fennel Sausage Garbure with Winter Vegetables, a hearty soup with a garden’s worth of vegetables and herbs. “Traditionally, everything but the kitchen sink goes in it,” Carl says.

• Oven-Roasted Pike with Bacon. The fish sits atop a mound of braised cabbage and under a Dijon mustard beurre blanc. A tangle of salty sea beans serves as the garnish. “What a great partner that is to the pike,” he says. “And they taste like the sea.”

• White Chocolate Hot Pot with Lemon Sabayon. Melted white chocolate enriches the batter of these individual cakes, and a dollop of white chocolate ganache is baked in the middle. McConnell uses a spoon to break the crust of the cake, ladles in the bright yellow sauce and garnishes with colorful, edible marigold petals.