Amidst the abundance of the Missouri Botanical Garden blooms the apothecary’s rose, known for its beauty and healing properties. 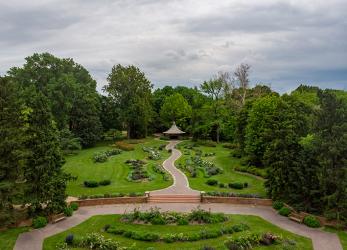 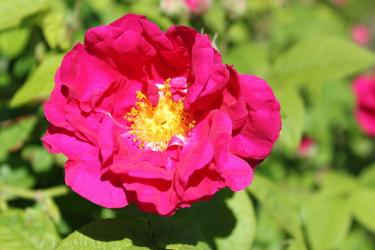 Summer brings an abundance of blooms at the Missouri Botanical Garden, from Japanese water irises to Asiatic lilies. Roses, too, are among the flowers blooming, and one rose is especially intriguing: the apothecary’s rose.

Gardeners divide the rose family into modern roses and old roses. Any plant bred after 1867 when the first hybrid tea rose was introduced is considered a modern rose. The apothecary’s rose predates 1867, making it an old rose. In fact, it is a very close relative to species roses that would have been found in the wild before cultivation.

Beyond being a centuries-old ornamental beauty, the apothecary’s rose has been planted for a number of practical uses over the years. Its name comes from its many medicinal benefits—it is high in Vitamin C and antioxidants and has the potential to support the immune system, reduce inflammation and improve mental health by boosting serotonin and dopamine. Its rose hips are excellent for making tea.

The apothecary’s rose is also highly sought after by the perfume industry. Native to south and central Europe, it was originally cultivated in Iran and has been traded out of the Middle East for centuries. Because of the high demand for its aromatic oils, it can sometimes be difficult to find available for purchase. The best time to smell a rose is at dawn or dusk, so be sure to stop by during the Whitaker Music Festival, when visitors have the chance to visit the Garden in the evening.