Something to see fills every corner of this small, perfect space.

Category:
Gardens of the Year
Gardens
| 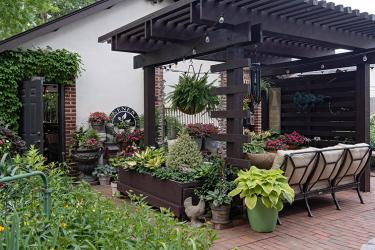 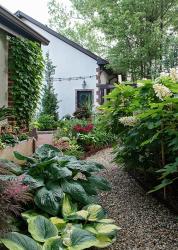 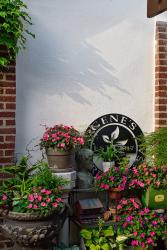 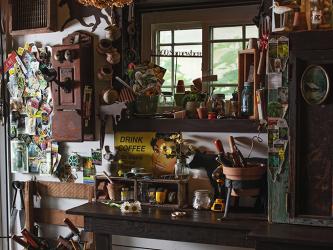 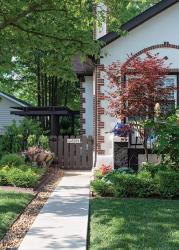 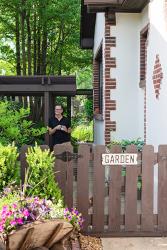 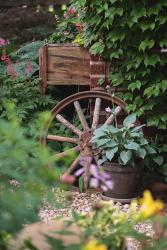 If a landscape could smile, Gene Pulliam’s Glendale landscape would be grinning from ear to ear. It is at the same time exuberant, charming, beautiful, serene, artistic and clever enough to bring chuckles of admiration. Gene has managed to create this stunning, joyful tribute to horticulture and design in just five years’ time. And all in just a .15-acre space.

There is a hint of what’s to come in the manicured landscaping of blue spruce, boxwoods, oak leaf hydrangeas and colorful annuals in front of the Spanish-style bungalow. The gates from the front yard and rear of the property, tagged with signs proclaiming “GARDEN”, leave no doubt that something special is in store. “Where nothing would grow” just a few years ago, the shady narrow strip of land on the other side of the front gate now overflows with hostas of all sizes and shades of green. To help define the small space and add vertical elements to his garden, Gene built two pergolas. One further shades the hostas and screens a neighboring house with three large, drooping, trailing spider plants suspended in baskets from the top railing of the structure.

At the end of the shadow-filled walkway, an arbor-style gate with the sign “FLOWERS” emblazoned on top is true to its word. A riot of daisies, daylilies, blacked-eyed susans, phlox, bee balm, coreopsis, Asiatic lilies and coneflowers, all organized along gravel pathways, teems with color-filled happiness. Along the pathways, hydrangeas, small boxwoods and diminutive evergreens provide structure and winter interest.

At the center of the garden, another pergola shades the brick-floored seating area accented to overflowing with flower- and shrub-filled containers. Streamers, which Gene picked up at a garden center and made up of tiny pieces of driftwood, dangle from the corners and sway in the breeze, providing a soothing, calming element. A collage of rusty farm implements, utilizing shovels, saw blades and rakes in artistic ways never dreamed of by a farmer, decorates the garden side of the pergola wall. A bronze of galloping horses races across the interior backdrop. No space is wasted. With earth at a premium, Gene builds upward, utilizing everything from terra cotta urns to old wash tubs on legs as planters for shrubs and flowers. There is not a corner of the yard his landscaping talent has not touched.

Although the garden is only five years in the making, the expertise that has gone into it reflects a lifetime of living with the land. Growing up on a farm southwest of Kansas City, Gene spent his youth working the earth and going to farm auctions with his father. His fascination with vintage farm artifacts, his appreciation for their design and history and his ability to cleverly include them at just the right spot in his garden are what makes visitors want to take an hour or two to explore the small space. There is something to see everywhere.

An old-fashion wire garden gate, immersed among the daylilies and black-eyed susans, is tucked just a few feet beyond the actual gate into the flower garden. The large, multi-spoked metal wheels leaning up against walls of the house and garage came from the hay rake he “walked behind as a kid.”  Wooden wagon wheels trim other spaces. A whimsical statue looking like Will Rogers in full cowboy regalia stands guard against the back of the house and surveys the garden. A rusty, miniature windmill accents the opposite corner of the stucco residence.

Gene stepped away from his farm roots for a 42-year career as a mortgage banker but still owned a ranch where he raised angus cattle. The influence of his farm upbringing is never far away. The design and plants in his landscape, however, reflect his high school junior and senior years spent in Denmark, where the family he lived with tended an English country-style garden.

Ten years ago, a career move brought Gene from the Kansas City area to St. Louis. When he bought his home in Glendale in 2017, he knew exactly what type of garden he wanted to create. He considered the small yard “perfect” for the cottage garden he had in mind. The stucco and brick garage off an alley at the rear of the property and backing the garden space, however, “was falling down.” Rather than raze it and build something new, Gene decided to make the necessary repairs and salvage the old structure. “I thought, ‘No. It’s an antique,’ so I saved it. One of my grandmothers lived in a really old house and as a little kid I was attracted to really old stuff,” he says, describing his penchant for structures and objects with history attached.

Now, the garage is a treasure trove of Gene’s collection of everyday garden tools coupled with farm antiques and vintage garden pots and implements. Collages of plant tags decorate the walls like fine artwork. He has furnished one corner with wicker chairs including a rocker. “Sometimes during the winter, I come out here with coffee and read,” he says.

The garden includes 50 hostas permanently planted in containers. In winter the garage attic, which Gene built, provides a place to store the smaller dormant pots of hostas. The containers come out again in late March or early April. Watering brings them back to life.

Gene designed the garden and worked with a contractor to install the hardscape. Then, his own talent took over to finish the project. “I have no formal training,” he explains. “Everything I know comes from years of trial and error. I have a large garden library and I read all winter long and dream of spring.”

He created this hosta-filled shade garden during the Covid lockdown. “I’d come out here to get away from my inside office,” he recalls. Gene began with just a few hostas and when a friend noticed his interest, he suggested Gene join the Saint Louis Hosta Society, which Gene did two years ago. It proved a match made in horticultural heaven with Gene vastly expanding his collection and the group recently touring his garden. “It had to be perfect before I turned it loose,” Gene says with a laugh.

The garden’s small size makes watering labor intensive as there is no space for sprinklers. Gene estimates watering by hand can take three to four hours per day during particularly hot spells. Fortunately, it is a garden chore he enjoys. He is judicious and picky about the plants that he puts into his landscape due to its compact size. “Even the work area has to look good,” he emphasizes. “I don’t hesitate to fire a plant if it is not working. Real estate is in high demand in this garden.”

He never tires, however, of searching for additional containers and adding interesting and whimsical objects to the garden. “In the winter, I get bored. I’m always going to antique malls and picking up stuff I can use to plant,” he continues. “I have friends trained. If they see something out by the curb, they take a picture of it and send it to me. I’ll text back and say, ‘put it in your vehicle.’”

After a lifetime of owning various properties including the ranch and a couple of condos, one at the Lake of the Ozarks, Gene has spent “a lot of time going back and forth. This is the first time in my life I have owned only one home, and I love it,” he says.  “I retired in March,” he continues, “People asked me, ‘What are you going to do? I thought, ‘You have no idea. I have a plan to do what I enjoy most.’”