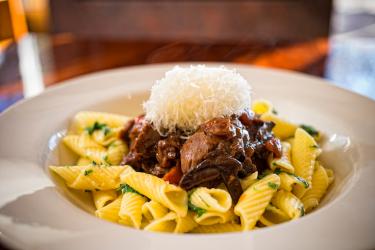 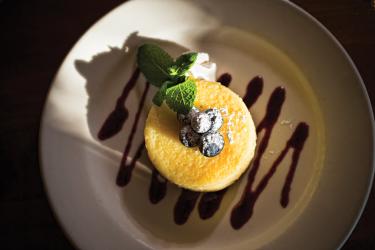 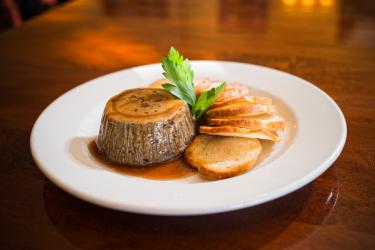 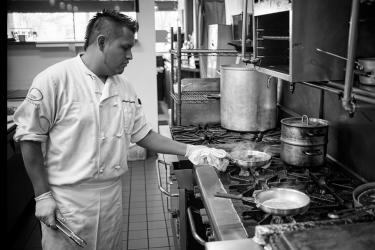 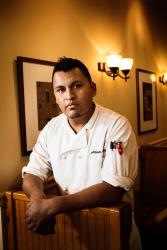 Chef/owner Bryan Carr pauses before describing Atlas Restaurant. “It’s a nice neighborhood restaurant, but our clientele comes from all over the area,” he says, explaining that Atlas, which is in the Central West End, draws many patrons on their way to performances at nearby Grand Center. Then he pauses again. “I never know how to describe a restaurant,” he says. “We are very detail-oriented. We just try to do things the right way.”

Carr and his wife, Diane, bought Atlas two and half years ago from their friends Michael Roberts and Jean Donnelly. The Carrs also own Pomme Restaurant and Pomme Café and Wine Bar in Clayton.

Pomme is a white-tablecloth, fine-dining restaurant. The café is casual, inexpensive, spontaneous. Carr puts Atlas somewhere in between.

“I’m at all three restaurants each day,” he says. “There’s a chef in each restaurant, and I work with all three of them.”

At Atlas, Alberto Ahuatzi is the chef de cuisine. Like Carr, Ahuatzi learned to cook by working in restaurant kitchens rather than by attending culinary school. “I attended the school of hard knocks,” says Carr, who grew up in Potosi, Mo.

Ahuatzi is from Tlaxcala, a small Mexican state near Mexico City. His hometown has a large French population, and he began working at a French restaurant at the age of 13. His family moved to St. Louis when he was 15. He knew little English. “I had a very hard time,” says Ahuatzi, who is 30, married to a woman from St. Louis and the father of two children.

While still in high school, he worked at Roberto’s Trattoria, and then went on to JP Fields. When the Carrs bought Atlas, Ahuatzi was working there three nights a week and working full time at Brio.

When the Carrs took over in July 2010, they retained the staff, the décor and the menu. Changes have been continuing and subtle. Some favorite foods – including the Piccolo Fritto, Roasted Beet Salad and Butterscotch Pudding –always will be offered, Carr says.

The two chefs work together on the evolving menu, Carr says. “We think about what tastes good. I never think about creating a dish." They’re not creating recipes from scratch, he says; rather, they are refining and interpreting dishes that have existed for centuries. "There are two kinds of creativity in cooking," he says. "The kind that interests me is not individual, it's cultural."

A taste of the Cooking School Menu:
Wild Mushroom Timbale with Crostini and Light Red Wine Sauce. An appetizer that combines French horn, oyster and organic crimini mushrooms in a savory custard subtly flavored with fresh thyme. A spoonful of red wine sauce is the crowning touch.

Lamb Ragout with Wild Mushrooms and Red Wine over Garganelli Pasta. Lamb shanks, fresh mushrooms, carrots and onion braise for five hours in veal stock and red wine, then are ladled over semolina pasta and topped with a cloud of freshly grated Parmesan.

Lemon Pudding Cake. Tart yet sweet, this simple dessert separates into a cakey bottom layer and a smooth, pudding-like top as it bakes. Garnishes include blackberry coulis, fresh blueberries, sifted powdered sugar and a dollop of whipped cream.