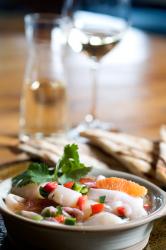 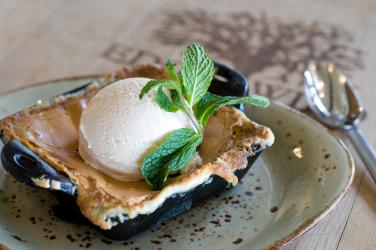 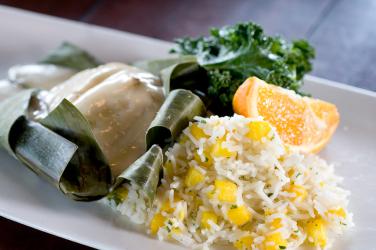 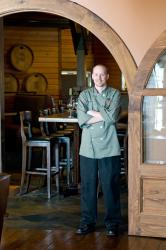 EdgeWild Restaurant and Winery chef Aaron Baggett was cooking at a Chinese restaurant and studying to be an architect when his sister convinced him that he belonged in culinary school. “I went from building buildings to building plates,” says Baggett, a graduate of the Culinary Institute of America in Hyde Park, N.Y.

EdgeWild’s most popular dish is an appetizer, Pistachio-Crusted Herbed Goat Cheese topped with white wine-quince syrup. It’s also the first recipe Baggett created for EdgeWild, which opened a year and a half ago.

“We want to be wine-oriented and infuse things with wine,” he explains. “We try to bring wine to the party.” EdgeWild is a bonded winery, aging 10 barrels at a time in a small dining room. Co-owner Dee Dee Kohn is a master sommelier who travels regularly to California and buys fine wine in bulk from wineries that produce more than they need, then bottles it under EdgeWild’s label.

“Being a winery allowed us to take that California-vineyard style of food,” Baggett says. “We evolved it to fit St. Louis.” The menu suggests wine pairings for each dish. EdgeWild also offers more than a dozen craft beers.

Baggett enjoys finding unusual twists for familiar foods, making meatloaf out of bison and wrapping it in pancetta, for example, and cooking salmon on an applewood plank instead of the more commonly used cedar. “People love the idea that you can get something you know, but not the same way you get it in every other restaurant,” he says.

The menu is large, as is the restaurant, which can seat about 420 guests. Stone-fired pizzas, low-calorie entrées and gluten-free dishes are among the offerings. “We try to accommodate all people,” Baggett says. “We have a lot of things going on.”