2013 Garden of the Year: A Decade Old Wonder

Category:
Gardens of the Year
Gardens
GOTY Past Winners
|

Mature "knock out" rose bushes contrasting with blue spruce mass around one of several staircase desgined to bring visitors into the Olivette garden. 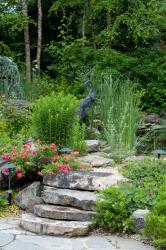 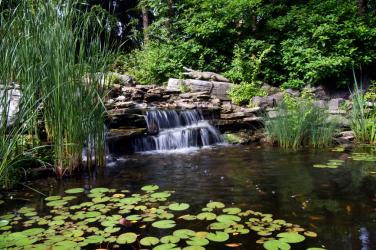 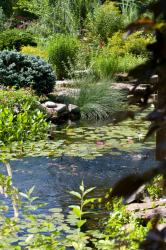 A lush Missouri pond is one of the many different vignettes encompassed by the garden. 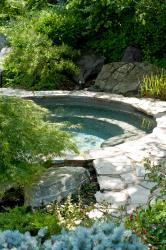 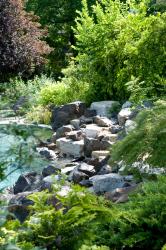 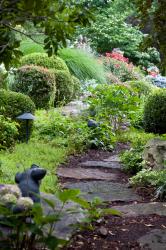 St. Louis Homes & Lifestyles Garden of the Year. Although an honor, the words hardly do justice to Muffy and Chip's horticultural masterpiece. Those who have been lucky enough to stroll the couple’s two-acre, Olivette landscape might easily term it a garden for the decades or a wonder of the suburban world.

While others marvel, to Muffy and Chip the garden has become the rhythm of their lives. In the 10 years it has graced their property, the splashes of the waterfalls, the flow of the streams, the reflection of the sun and the moon off the water, the power of the boulders and the peace and joy of the plants has woven its way into their hearts and minds. They listen to it, relish it and find peace in it.

The garden encompasses a huge, lake-like swimming pool, both small and large waterfalls, a meandering stream, a cattail and-water lily-filled pond, multiple pathways leading through sun and shade gardens, a charming guest cottage complete with kitchen and bar area and a variety of landscaped patio spaces to simply sit, relax and absorb it all. “It is a garden of different vignettes,” Muffy explains in summation.

The vignettes, in fact the entire landscape, are truly of the Matthews' making. Once a tennis court for their game-loving daughter Marka, the space suffered once she left for college. Muffy allowed it to languish for a year, mulling over whether it was time for a change and what the change would be. When she reached a decision, it was absolutely earthmoving.

“I wanted an ocean,” she says with a laugh. “I wanted as much water as we could fit in the backyard.” It was a project, she freely admits, that had to be planned and designed in phases. “It was too much for my mind to encompass at one time; it had to be phased in. We almost had to do everything backwards.”

Rather than designing a pool and a waterfall and a guest house, then fitting a garden around it, the Matthews began with rocks. “I’m such a rock hound,” she admits. “I just love rocks.” The rest of us would term Muffy’s rocks boulders, and she has lovingly selected them herself. One of her favorites “Big Red,” appropriately named for its sheen, weighed in at 7,500 pounds.  It now dominates one side of the salt water pool. Another boulder ripples with streaks of white. Still another bears spike-shaped vertical markings created by the metal rods pounded into the boulders to free them during the quarrying process. “When I picked it they said, ‘You don’t want that one; it has the rod markings,’” she recalls. “I said, ‘Yes I do. It shows how it was quarried. It’s interesting. It tells a story.’”

The rocks came first, Muffy explains, because the water had to balance the weight of the rocks to make the landscape fit seamlessly into the space. One of her favorite stories of the building of the garden was working with Free Form Pools on the size and shape of the pool. There was good news and bad news when working with the shape, she recounts. “The good news was that we finally had the shape right; the bad news was that we had to dig out an extra foot all the way around to make it big enough.”

Chip’s design and engineering expertise came to the fore in the creation of the waterfall that splashes into the stream and pond surrounding the guest house. The height and the amount and force of the water were all important to make the manmade structure appear natural.

Throughout the project, Chip noted three goals that were all important to him. “I wanted the garden to look like God had put it here; I wanted it to look lush, and I wanted color throughout the growing season,” he says.

The couple easily achieved those goals and have augmented them during the past 10 years. Muffy delights in adding small, whimsical ornaments to the garden, what she calls “little things placed here and there to make you smile.” A large wrought-iron ant crawls beside a garden pathway, a ceramic turtle suns itself on a stream-side rock; a whimsical frog appears ready to dive into the pool. “I don’t want things to be too obvious,” she says. “I want to create a series of surprises.” She has also fashioned the garden to be “happy and joyful” and at the same time “serene.”  “We’ve tried to use shapes and varieties of plants that will allow people to use their imagination; to let their mind wander, pretend, dream and soar,” she explains.

Not only do the Matthews relish the time they spend in their garden, they have been generous about sharing it with friends, charitable groups and allowing it to be on numerous garden tours. They’ve even added an extra set of brick steps from the upper terrace to the water features to provide additional access to the spots everyone wants to stroll. “I’m always being asked if I can host an event in the garden,” Muffy says. Almost always her answer is, “yes.”  “The most glorious part of the garden is sharing it,” she affirms.