Wining and Dining along the Douro

Known as the birthplace of sweet port wines, Douro Valley is home to Quinta do Vallado, the most historic wine property in the area. 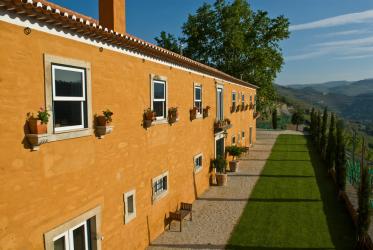 Great house at Quinta do Vallado. 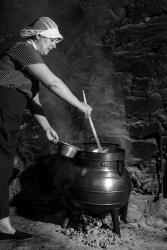 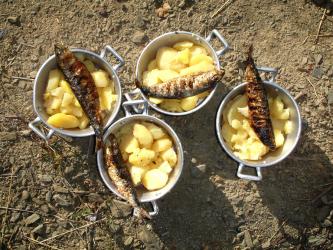 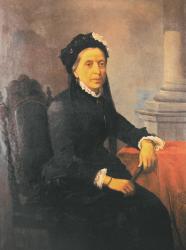 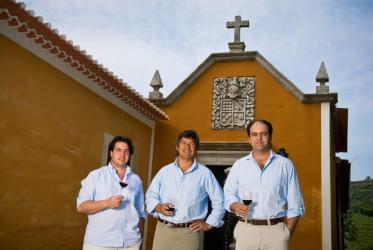 You are sitting in a glistening stainless steel and white-tiled kitchen, watching a Portuguese woman in what could best be described as 19th Century kitchen garb, including a white linen cap that is the much more stylish precursor to the kitchen hair net, stirring a black cauldron over an open flame in the nearly floor-to-ceiling burnished red brick fireplace that takes up an entire wall. In that antique pot is Caldo Verde, the traditional potato-based soup, filled with cabbage, onions and Linguica (Portuguese dried sausage), made exactly the same way it has been for centuries in the Douro Valley, the famous, picturesque wine region an hour’s drive east of the city of Oporto.

From the kitchen’s many large windows, you can see steeply terraced vineyards rising up from the Douro River’s banks to the high hills on both sides of it. This is the view that Joao Ferreira Ribeiro Alvares and his family (the sixth and seventh generation of the Ferreira family) enjoy while dining on one of the terraces at Quinta do Vallado, the most historic wine property in this area, which was the first demarcated wine region in the world.

It is the same magnificent view of the river and surrounding hills that his most famous relative, Dona Antonia Adelaide Ferreira, saw for most of the 85 years she lived in the vast, burnt-orange stucco and stone “great house” that still stands nestled in the hillside. It serves as both a guest house and the site of Ferreira family dinners, meetings and other significant events.   Widowed at the age of 33 in the mid-1800s, she was the first woman to helm a wine company in Portugal, and possibly the world.

While the Douro Valley is known as the birthplace of sweet (Port) wines, Joao and his two cousins, winery manager Francisco Ferreira and winemaker Francisco Olazabal, have become trailblazers, much like their famous ancestress and the original Ferreiras, who first planted grapes there in the early 1700s, by producing dry red and white wines that are excellent accompaniments to the menus their chef prepares. A traditional Portuguese red blend like Quinta do Vallado’s Douro Red – a premium, yet affordable, five-grape wine that is typical of the hearty, yet smooth, dry wines the region produces – works well with the pork, onions and spices that show off the meatiness of the clams.

Desserts include eggs in some amazing preparations, from Pasteis de Nata (egg custard tarts) to “Spun” egg pastries, or sweet fruit creations, like “Laminated Oranges” with Port wine a key ingredient. Joao serves this dessert with the modern winery’s first Vintage Port, fittingly named “Adelaide” – in honor of the “Doyen of the Douro” as Dona Antonia Adelaide Ferreira was known. It is a homage from a family both proud of their heritage and also looking forward, as their family has always done.