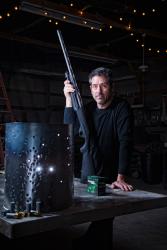 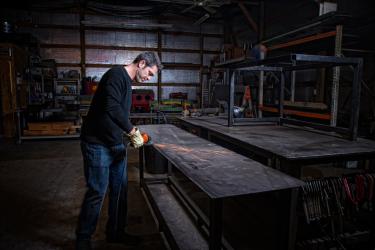 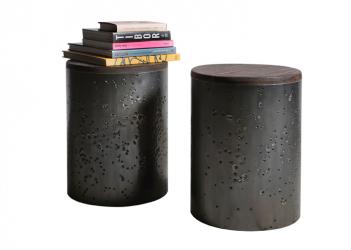 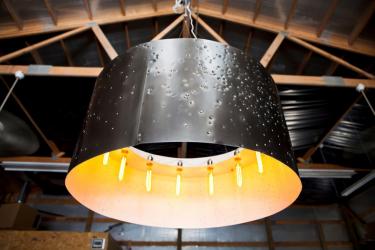 When John Beck couldn’t find an elevated dog feeder that would work for his American Boxer, Drama, he took matters into his own hands – literally.

He searched and searched for just the right materials, as he often does, and made the feeder himself out of steel and porcelain bowls.

The feeders are just some of the things he makes. He owns John Beck Paper and Steel in Edwardsville, Ill., where he constructs custom steel furniture, doors and lighting. To make the pieces, John and his team work with welding machines and saws, but most of their work is done with their hands. They clean, cut, weld, polish, sand and sometimes paint the steel. Or they will take a shotgun to it. Seriously! The shotgun pieces are his favorites, and the holes and indentations add character.

Although some of his work can be found locally in a few places, such as Winslow’s on Delmar, most of his work lives on the East and West coasts and in Chicago and Texas. He has sold his pieces to places such as Facebook, Google, Starbucks and Under Armour.

John’s interest in furniture making started about 20 years ago when he was looking at a Room & Board catalogue. John thought the furniture he saw in the catalogue was groundbreaking. Then he had another thought: He could make furniture like that. So he did.

At the time, he was working in welding supply and has a degree in graphic design, so he learned the techniques by doing. He eventually left his job and opened a furniture shop downtown called Blend with his sister-in-law, who collected vintage farm furniture. The shop closed, and he opened his current business.

His pieces are all about functionality. He isn’t into trendy, and he isn’t into fancy. If a part doesn’t serve a purpose, they don’t use it. And doodads? Forget about them. He’s not looking at what other furniture places are doing for inspiration. He doesn’t want to subliminally recreate something. He makes things, like the Drama feeder, that are necessary.  “My inspiration is necessity,” he says.

John will spend roughly eight to ten weeks on one project. When he does a project, he devotes time to really thinking about it and what things will make the piece unique. “I try to do some personal things,” he says. He’ll hide little surprises in his work. The pieces on his website are like starting points. Clients will see something online and will ask for customized versions of the pieces, like a painted top or longer sides.

On his website, johnbecksteel.com, he encourages you to get in touch if you think “no interior is complete without a healthy dose of steel.” But he’s not looking to push this style of furniture on anyone. “If somebody’s into it, they’ll know,” he says.