A team effort of the owner and his mom, this dynamic downtown loft exemplifies the best in urban living. 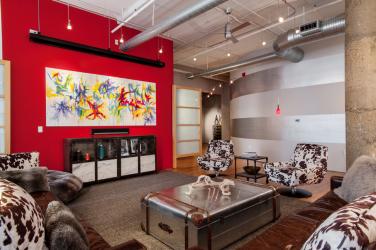 A fusion of the owner's taste and interests, the "living room" is delineated by a comfortable seating arrangement, grouped around a massive shipping trunk, which is topped with a piece of grapewood branch from West Elm. 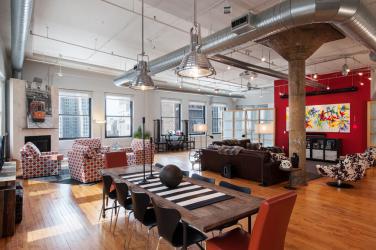 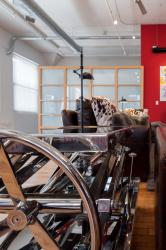 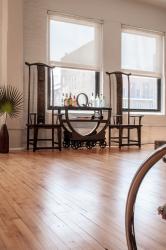 On an outer wall, Ming chairs from Arhaus and a vintage bar cart from Restoration Hardware make an intriguing combination. 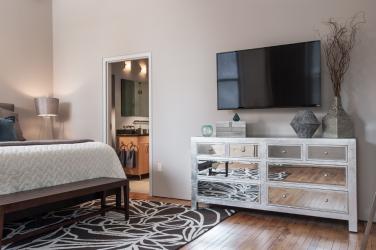 Soft grays and a mirrored, metallic-finish dresser and side tables give the master bedroom a crisp, contemporary look. 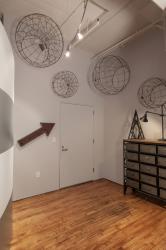 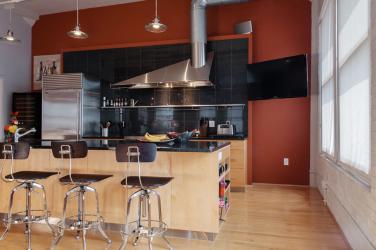 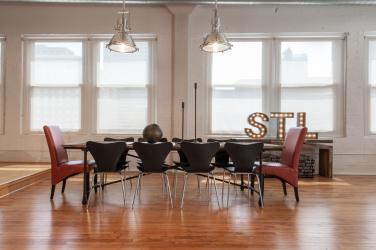 The reclaimed wood dining table is surrounded by leather and chrome-and-wood dining chairs. Lighted letters on teh sideboard are a whimsical reminder of the loft's vibrant downtown location.

Raised in Webster Groves, Patrick Quinn readily admits that he “can’t get St. Louis out of his blood and keeps coming back.” After years of back-and-forth travel to various U.S. cities and to Cambridge, England, this former corporate COO and father of two returned to the Gateway City, where he rehabbed a historic home in the Central West End.

Something was still missing, though. “With all that’s going on downtown, I wanted to be in the thick of the action,” says Patrick, explaining the allure of the high-rise loft he purchased 18 months ago just blocks from the riverfront. A year later, a fabulous corner unit became available directly across the hall, and Patrick snapped it up immediately.

Built as a warehouse in 1913, the 11-story building holds a place in history as St. Louis’ first downtown loft/condo conversion, and Patrick’s residence epitomizes the industrial loft lifestyle – nearly 4,000 square feet of open space, huge structural concrete support columns and towering ceilings webbed with a network of exposed ductwork and conduit. With 15 windows on two sides and panoramic views of the cityscape, Patrick describes it as “my home 10 stories in the sky.”

He wanted the loft’s décor to reflect his personality, which he contends is defined by “sports and music.” A huge sports fan, Patrick has played hockey since age four. He’s also on the board of the St. Louis Sports Commission and was particularly attracted to the building’s location by the fact that it’s within walking distance of all three of the city’s major sports venues.

To help bring his vision to life, Patrick turned to his mom, Barbara, the acknowledged “family decorator.” A retired cytotechnologist for St. Luke’s Hospital, Barbara casually dismisses her affinity for interior design as a hobby. Pressed for details, however, she concedes that she’s designed all of her own homes, “somewhere between 30 and 40” others for the Quinns’ large extended family and Patrick’s previous loft, as well.

Together, mother and son did virtually all of the interior work themselves, assisted in the “heavy labor” by a team member from Sitelines, owned by Patrick’s friend, Kelly Kenter. First on the list was a complete re-paint of the walls, ceilings, and pipework. Soft gray tones and vibrant accent walls established the color scheme, and wide metallic stripes painted horizontally on the entry foyer’s curved walls forecast the loft’s industrial ambience.

To make the vast open space more usable and comfortable, Barbara decided to create clearly defined “room” areas. Some of the furnishings would come from the previous loft; others would be new. “Patrick was easy,” Barbara laughs. “He was counting on me to know what he wanted.”  Handing her son a contemporary lifestyle catalog, she asked him to identify some pieces he liked, and the two embarked on a preliminary shopping foray.

The loft’s corner fireplace presented an ideal location for a conversation nook, and Barbara recommended a grouping of oversize swivel chairs, which were custom-upholstered in a bold geometric fabric, then arranged around a hammered steel drum table. A 100-year-old piece of wood from Rustic Grain became the fireplace mantel, over which a colorful print of a Milanese cable car reminds Patrick of his European travels. This space also set the tone for the overall décor, which he wanted to be “colorful and lively, with touches of reclaimed items.”

The “living room” area showcases all of Patrick’s passions. Previously owned, low-slung leather couches and a deeply textured rug define the space; a massive metal shipping trunk serves as a coffee table; and Patrick commissioned local artist Dagny Challoner to paint the vivid, 4’ x 8.5’ triptych that dominates the brick-red perimeter wall. A 10-foot screen drops from overhead and an HD Panasonic projection system provides bigger-than-life-size viewing for sports events. Twelve speakers and a SONOS wireless HiFi audio system fill the loft with music that Patrick can control from anywhere on his iPhone. A true technophile, he’s also installed a flat-screen TV in every space.

New pieces purchased for the living room included a sleek storage unit with decorative marble panels, two swivel chairs in a simulated cowhide print, a rustic side table from Restoration Hardware and, as incongruous as this may seem, a gleaming surgical table that emphasizes the industrial look and can be adjusted in height for a multitude of purposes.

Few changes were necessary in the well-equipped, step-up kitchen, which is wide open and lavished with black granite. Guests typically gather around the 12-foot island, where pendant lights and teak-and-chrome bar stools from Restoration Hardware give the overhang a “millennium soda shop” look. Patrick’s only significant modifications were the installation of a wine cooler and, in the pantry, an elaborate system of ventilated stainless racks and drawers from The Container Store.

Room dividers with frosted glass panels separate the loft’s privacy areas from the living/entertainment space. For the master suite, Barbara chose a palette of taupey grays, accented with slate gray and navy blue.  West Elm was the source for the patterned rug, bedding and leather-paneled headboard; the mirrored and metallic-finished side tables and dresser came from I.O. Metro; and bubble-glass lamps with inverted metallic lampshades add an eye-catching touch.

The color scheme is echoed in the guest bedroom, which has slate blue walls, a wrought-iron bedstead, taupe-gray bedding, and side tables in wrought iron and reclaimed wood. A well-cushioned chair and ottoman in a navy ikat pattern invite relaxation, and a tailor’s rack is both functional and a whimsical accent.

Noting with pride that Patrick gives back to his home city by serving on the St. Patrick Center board, Barbara describes her son as “analytical, driven, hilariously funny and completely comfortable with who he is.”  And Patrick’s stylish urban residence substantiates his confidence in his mom’s design skill, as well. Masculine without being overbearing, the loft combines their visions perfectly – a tribute to the Quinns’ congenial mother/son relationship.