A Clayton high-rise gets a dose of Native American charm for an entertaining couple. 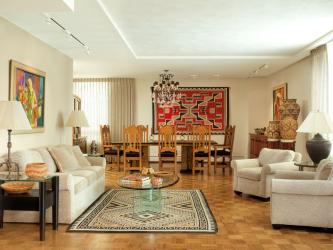 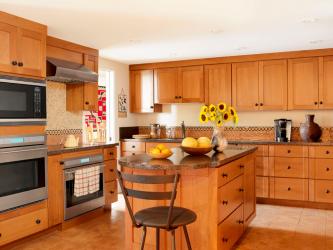 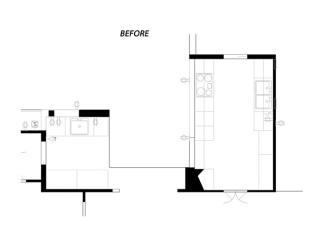 After 50 years in Davis Place, Elaine and Tom Tucker made a big move from life in a single-family home to high-rise condominium living.

Their new 3,600-square-foot space on the 13th floor in Clayton is really two condo units combined, giving Elaine plenty of area to incorporate the Native American art she’s acquired over decades of dealing and collecting. However, for a couple who loves to cook and entertain, the home still lacked space where it mattered most: the kitchen. So they sought the help of designer Emily Castle to get it to a level of functionality that served their penchant for socializing.

“The original kitchen was nothing more than a galley kitchen,” Elaine explains. “We worked with Emily, the architect [Derek Maschek] and contractor Mike Willard and increased the space by taking part of the existing condo to expand the kitchen.” The result is an open, airy unit that’s flooded with natural light and brimming with history and character.

“The challenge was to renovate the space, adapt it to the Tucker’s lifestyle and incorporate Mrs. Tucker’s collection of Native American Indian art and Southwest sensibilities,” says Castle.

Brick-colored tile flooring, granite counters, a colorful geometric tile backsplash and lots of cherry-wood cabinets lend a rich, natural warmth to an expanded kitchen that evokes the American Southwest. The beauty of the natural materials is surpassed only by the functionality. The added footage allowed Castle to incorporate a walk-in pantry to house the Tuckers’ cooking equipment, a center island where Tom reads the newspaper over his morning coffee, a Sub-Zero fridge and not one, but two Wolf ovens and a double cooktop that get regular use in the Tuckers’ party prep. The kitchen now opens up to the dining area, where there’s ample room for dinner guests to mingle, and a bright living room that’s populated with the couple’s Southwestern furniture and punctuated with Native American baskets largely dating from 1880-1920.

While Tom revels in his “pride and joy” – a wine cellar that can accommodate hundreds of bottles of choice vino – Elaine appreciates the low-maintenance flooring and a layout that lets her put everything back in order after entertaining. “I love the pull-out shelves. I can reach everything from one spot; when I do dishes, I don’t ever have to move to put things away.”

After an 11-month renovation, the Tuckers now have a spacious, high-rise home they’ve been able to settle into as cozily as the house in which they spent the previous five decades. “Lots of times when you get those open spaces you get a coldness about the area, but the warmth of the colors brings out a homey feeling,” says Elaine. “We wanted a feel of Santa Fe. You’re surrounded by wood and brick-colored tile. There’s a nostalgia, a comfort, in that.”