A "City Chick" finds her true calling in the Vineyards

A love of chemistry led female winemaker Kim Jackson into a career in oenology. 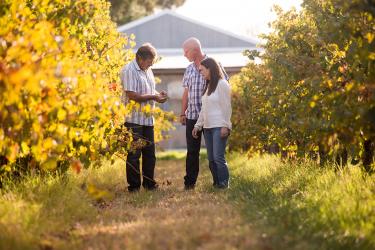 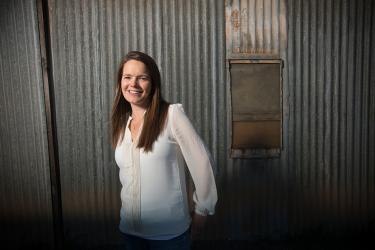 Late winter in the United States is actually harvest time in countries below the Equator. So, it should be no surprise that South Australian winemaker Kim Jackson is spending nearly every waking hour now in the vineyards of the two high-quality wineries for which she works – Shirvington in McLaren Vale and Henry’s Drive in Padthaway. Unless you knew her before she found her life’s work...

Born and raised in Adelaide, Kim always was interested in chemistry. “It was my favorite subject in high school,” she explains. “When I went to Adelaide University’s Enrollment Day, I looked up all the different degrees that focused heavily on chemistry. I almost laughed at the agricultural science degree as I’m a ‘city chick’ and hardly stepped foot on a farm.”

Still, for Kim the idea of being an oenologist was appealing. She liked the vast amounts of chemistry involved, coupled with working outdoors much of the time. “I thought it would be better than staying inside all day at a laboratory or pharmacy,” she recalls.

Her parents always enjoyed wine with dinner, and her father had a collection in his cellar that mirrored his “better than average” palate. He was president of the local “Beef Steak and Burgundy Club,” a group of men that met once a month at a different restaurant to eat good food and drink wine from the club’s cellar. Her dad was so enthusiastic about winemaking as a career choice for his daughter that “he practically filled in my university enrollment form for me,” she says with a smile.

Sadly, Kim’s father did not live to see her become an oenologist, but she knows he “would have been proud” to see his daughter rise through the ranks of winemaking in her native Australia and at famous vineyards in California and the French region “near and dear to his heart” – Burgundy.

After graduation, she was working in the fertile McLaren Vale soil under the tutelage of some of the top South Australian winemakers of the late 1990s, when Australian wines were becoming wildly popular around the world. She returned to McLaren Vale after traveling abroad, making wines as part of a well-known consulting firm in the region. While there, she met and made wine for both Paul and Lynne Shirvington, owners of Shirvington, and Kim Longbottom, owner of Henry’s Drive. Kim was instrumental in the development of the now-famous Pillar Box Red wine, called “one of the best value wines in the world” by famed American wine reviewer Robert Parker.

“I’ve always been attracted to producers who strive to ‘bring the best’ out of their vineyards and have a passion for making what I call ‘real wines’ of quality and distinction,” Kim explains, “even skipping vintages of their popular labels because they don’t think the grapes meet their high standards and what their customers have come to expect of their wines. Both the Shirvingtons and Kim Longbottom easily fit my criteria.”

Kim also is impressed that, unlike many wineries (even some at the highest-quality level), both Shirvington and Henry’s Drive only use fruit from their own vineyards. “I find this most interesting as a winemaker because the wines can speak to you about the different vintage conditions, which is less possible when you blend your grapes with those from vineyards that will differ likely from year to year.”

The one intrusion on her winemaking responsibilities is her family. In 2007, just before the birth of her first daughter, Kim had to give up working full time as a winemaker.  “Like many working women with young children (Kim now has three girls, ages 7, 5 and 3), I wasn’t sure if I was ever going to be able to resume my wine career. Vintage hours (working between 10 and 16 hours a day during most of February, March, April and sometimes even into May) are not family friendly.”

Once she felt that she could devote time to winemaking again, Kim was very lucky that the Shirvingtons were understanding and as accommodating as possible. Since they make only a limited number of super-premium wines from single vineyards, it is not as time intensive as much larger operations. With Henry’s Drive, she is able to oversee production of their many wines with the help of a winemaking team – and also with a little help from her daughters. “The girls have become a part of the process and have endured quite a few trips to the vineyards so I can assess the fruit, and to the wineries, particularly during vintage,” the proud mom boasts. “They are getting an early hands-on wine education...in effect growing up in the vineyards.”

Once almost exclusively male, a growing number of women are getting degrees in winemaking, as many as 25 percent of the graduating classes in the past few years at Kim’s alma mater. Kim is considered a role model for women looking to make a career in the Australian wine industry. Shirvington Shiraz and Cabernet Sauvignon wines have never received lower than 90-point ratings in top wine publications like Wine Advocate, and both Henry’s Drive and Shrivington wineries were given five-star ratings this past year from James Halliday, the most respected Australian wine reviewer. Not bad for a “city chick.”