Designed by St. Louis' "Dean of Modernist Architects," this Creve Coeur treasure has been authentically restored by its present-day owner/architect. 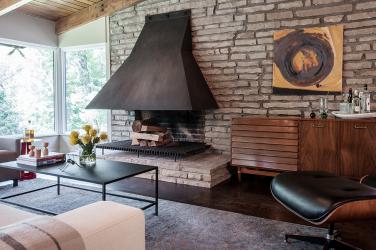 Vast expanses of glass and natural materials integrate this mid-century modern home with its surroundings. 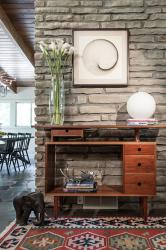 A pleasing blend of styles, the foyer showcases a valet-style cabinet, kilim-patterned rug and contemporary art peice by Shalom Gabay. 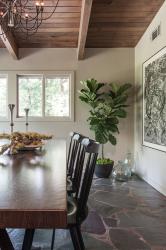 Ranging from 8 to 25 feet in height, the home's tongue-and-groove oak ceilings are original, as is the dining room's slate floor. 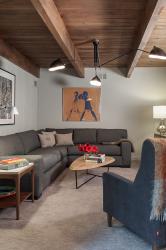 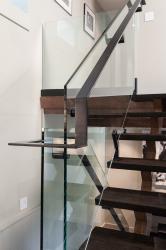 Uniquely redesigned by the owner, the switchback staircase connects all three levels without obstructing the view. 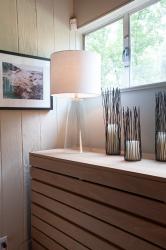 A white-oak dresser, organic candleholders, and a Nova Scotia seascape, photographed by the owner, decorate the lower-level guest bedroom. 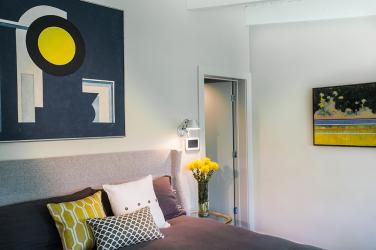 Accenting the walls of the master bedroom are a bold abstract, entitled "In the Manner of Eileen Gray," that formerly hung in Balaban's and another abstract by St. Louis painter Julie Malone. 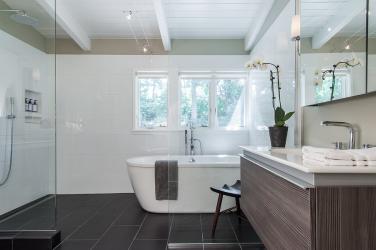 Formerly a secondary bedroom, the master bath was transformed into a luxurious spa, with heated floors and curbless rain shower. 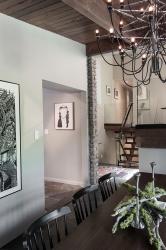 Hidden among the trees on a magnificently wooded hillside in Creve Coeur is an architectural gem. Built in 1957, the stunning mid-century modern home was designed by renowned architect Harris Armstrong, universally recognized as the dean of the modern movement in St. Louis.

Although most of Armstrong’s education was acquired while working for various architectural firms, he received some formal training at Washington University, and the majority of his professional career was spent in the St. Louis region.

So, it seems particularly fitting that nearly six decades later, this 2,700-square-foot tri-level was acquired by Michael Schwartz, cofounder of Blackline Design + Construction, who earned his bachelors and masters degrees in architecture from Washington University.

A basic tenet of the postwar modern movement was that the design of a structure should be determined by its site. The objective was to “blur the distinction” between indoors and outdoors, emphasizing simple lines and flat planes; open, split-level interior spaces; natural materials, and vast expanses of glass to integrate a home with its surroundings and capitalize on ambient daylight.

Michael had spent nearly two years searching for the “right” home and acted instantly when this historic property became available in late 2013. Remarkably, previous owners had made virtually no changes to the exterior, which retains its iconic midcentury design. The interior, however, had undergone a series of renovations, and authentically restoring the spaces was first on the new owner’s agenda.

To preserve the home’s authenticity, various factors had to be taken into account. For example, the beamed, tongue-and-groove wood ceilings allowed no space for wiring, which limited the use of overhead lighting. Installation of surround sound was similarly impossible, and the owner solved this problem with synchronized Sonos wireless systems, two inside and one outside.

Like many Armstrong plans, the home’s main entry is at the rear, and its distinctive décor is quickly established in the foyer, which features cut-stone walls, a kilim-patterned rug from Siena and a valet-style cabinet, one of several furniture pieces crafted by the owner’s friend, Martin Goebel of Goebel & Co.

Above the cabinet, a three-dimensional work by Shalom Gabay reflects Michael’s love of fine art and his penchant for blending contemporary and traditional styles. “Every piece in this house was purchased separately and has a story,” he explains. “Some were acquired during my travels; others are vintage classics. Basically, I wanted to create a warm, lived-in environment where people feel comfortable putting their feet up.”

To the right of the foyer, the dining room has its original slate floor and tongue-and-groove ceiling, and the fumed white-oak table is complemented by clean-lined salt chairs from Design Within Reach. Accessible from the dining area, the kitchen is typical of its era and eventually will be the owner’s next renovation project.

Accessing the upper and lower levels, the foyer’s switchback staircase is a true showpiece and was completely redesigned by Michael, who explains, “I wanted an unobstructed view to connect the spaces.” Preserving the original wood treads, he created a staircase that appears suspended in air, bordered with thick, frameless glass panels and a linear metal railing, all provided by Troco Custom Fabricators.

Upstairs, the living room is the epitome of mid-century styling, from its beamed, tongue-and-groove ceiling to the walls of windows overlooking the densely wooded 1.5-acre property. The space is dominated by its original fireplace, a signature element in Harris Armstrong homes. Cut stone blankets the raised hearth and background wall, and a massive hood reaches nearly to the ceiling.

Consistent with the period, the room is comfortably furnished with a neutral-toned sofa, side chair and area rug from Niche; a Herman Miller Eames chair and ottoman (a “birthday present” from the owner to himself); a streamlined steel coffee table from Portland, and a vintage console cabinet found at a local antique store.

A hall leads from the living room to the privacy wing, which houses the master retreat and two additional bedrooms. Adapting the master suite to today’s lifestyle, Michael converted an auxiliary bathroom to a sizable walk-in closet and transformed a former bedroom into a luxurious master bath, with heated floor, 12” x 24” high-gloss wall tiles, two Duravit vanities, Grohe fixtures, a free-standing tub and a curbless rain shower.

Thoroughly masculine, the master bedroom features a Gus* Modern bed, flanked by vintage night tables and Tolomeo wall lights. Adding a splash of color are two favorite artworks – above the headboard, a bold abstract that had hung in Balaban’s Central West End location for years, and on a side wall, an abstract painting by local artist Julie Malone.

Flowing smoothly from the main level, the lower-level family room provides additional entertainment space, prompting the owner to mention that he’s been able to host up to 70 guests at a time. This space also serves as the audiovisual room and is adjoined by another bedroom/bath suite for overnight visitors.

Outdoors, a huge deck with hot tub extends from the rear of the home, and here Michael made an interesting design decision. Like most mid-century homes, the residence was built with a carport, adjacent to the deck but on a lower level. He chose not to enclose the parking area for a garage, but instead installed glass panels to integrate the deck with the carport. Lit by a skylight, the covered structure offers still more warm-weather entertainment space, regardless of the elements.

Further sensitive to the site, Michael surrounded the small yard with a barely noticeable metal-rail fence to accommodate his rescue dog, an affectionate Treeing Walker Coonhound.

Newly renovated, this mid-century home clearly demonstrates the owner’s reverence for its iconic architecture and exquisite hillside setting. The end result undoubtedly would have delighted Frank Lloyd Wright, who maintained: "No house should ever be on a hill… It should be of the hill. Belonging to it.  Hill and house should live together, each the happier for the other.”